The Main Slab has several interesting routes, including the multi-star "Across the Universe (5.10)", "Hugo's Horror 'Revisted'"(5.6 / 5.7) and "Time-Space Continuum" (5.8) (originally entered as "Time Traveler 'Revisted'".) In the case of "Hugo's" bolted anchors were added, and an occasional protection bolt, to pretty much the original line of an ancient "X" route.

"Time-Space Continuum" is a new line carefully worked out to not touch older routes such as "6000 Salad Bowls", "Time Traveler" and "Ursa Major. "Time Space" has bolted anchors and "alpine" protection bolts.

Recent work has "re-discovered" the line of an "ancient", previously unreported full length route done in 1966. ("A Night Climb for Two Knights") but more importantly this work "uncovered" three short, new routes that are fun in themselves or as P1 alternatives to "Star Trek's P1" that are free of poor rock, massive lichen, and general ugliness. Other's have said of Star Trek's regular P1: "...you'll not belichen this!"; but these three new, short routes are on clean, solid rock.

When Whitehorse is crowded, try Mt Willard's Main Slab for some fun routes!

See "Getting There" in the main section for Mt. Willard.

Shortest and fastest approach is via the "Hatties Garden Approach Path", rather than walking along the RR tracks all the way from the top of Crawford Notch. 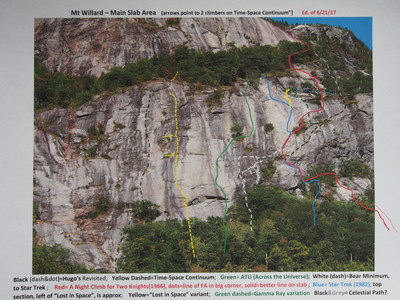 All Photos Within Main Slab