Lost in the Sun

Friction slabs and arch corner cracks to bolted belay anchors. 7 pitches go up adjacent to the long tree gully up the slabs. Good photos on the internet from images, (green chasm n.h.) of climbing on Mt. Webster and the central slabs. The photo's from Lost in the Sun, head wall, I don't know where they are.

Admin.'s NOTE: Bradley White soloed the approximate route of Lost in the Sun and named it "Key Stoned". He has chosen to keep the more common name "Lost in the Sun" for the route. His route description is that given above. For those looking for a bit of route finding adventure STOP HERE, others may appreciate the description below, from Ben Townsend:

Start: where the drainage gully meets the slab, there are three obvious features -- a wide vertical dike of black volcanic rock on the left, an open left-facing corner with a blank-looking left wall, and an alcove on the right at the base of a reddish vein or weakness that goes up into a short, darkish left-facing corner. This alcove is where you want to start.

P1: Up the short left-facing corner, then diagonal up left across a slab to corners, ledges, and an anchor. 115' (we rapped this pitch with a single 70m rope). The neclimbs description says there's a bolt on this pitch, but we saw no sign of one.

P2: You'll notice another anchor about 40' up and right -- ignore it, it's the P1 belay of "Direct". Instead, start up low-angled corners, then follow a slab* past three bolts to an easy headwall with cracks and a big ledge with two sets of anchors. (The third bolt is oddly located, requiring a stop right in the middle of the crux friction, despite a good stance just down to the right.) *The slab seems to hold its wetness. If so, it's easy to move a bit right and climb to the same ledge via "Direct".

The left set of anchors has one hanger sheared off by rockfall, though gear placements allow for backing up the other; the right set of anchors (of "Direct") has stainless bolts, but rusty plated ring-anchor hangers. A few minutes with a wrench and two stainless ring-anchors would remedy this issue, and if I get back up there this fall, I'll try to remember to do that. (Admin. NOTE: On the left, in addition to the broken bolt hanger, the bolt itself appears is bent. I was unable to remove the nut with a wrench. R. Hall 10-8-15)

P3: Up the obvious right-facing corner to a slab with three bolts (two visible from below); trend up right to an anchor.

P4: Easy slab to a ledge, then easy left-facing corners to a big ledge and anchor.

(NOTE: From this belay an easy "groove" leads up and right to the belay on "Direct" just below the fabulous "white slab" pitch. (P6 of "Direct") If the upper pitches of "Lost" are wet, this is a good alternative.

P5: Up an easy water-streak groove with poor rock, the traverse left below a headwall, cross a gully, and diagonal up left on flakes and cracks to the obvious Snake Flake. Up to its top, then move right to the anchor. Lots of rope drag possible if you don't use long runners wisely.

P6: Friction slab past two bolts (a bit heady off the belay to the first bolt, though the climbing is easy), some thoughtful gear placements in pockets or flakes on the slab, two more bolts (the third is hard to see until you're very close), then up to a horizontal and anchor.

P7: Up a white streak on very low-angle slab past one bolt to a ledge, clip a second bolt, then a short dark slab past an overlap to the anchors. 105' (maybe possible to rap with a 60m rope; a single 70m is certainly plenty).

All belays are two ring hangers except as noted. (Though some have mismatched single-ring and double-ring hangers; a perfectionist might do some rearranging.) Light rack to #3 Camalot.

Descent - 8 Raps down the route with two ropes. Two 60m's are probably more than enough. (It seems to me the first 7 pitches were "set" with 50m (165 ft) ropes.  There is an anchor on "Direct" 15-20 ft right of the anchor with the broken hanger. Trying a descent with a single 70m will result in thrashing raps in the trees, leaving gear, or rapping off single bolts.

See "Getting There" for the "Main Slab".

Once at the base, Lost in the Sun starts just left of the "toe". 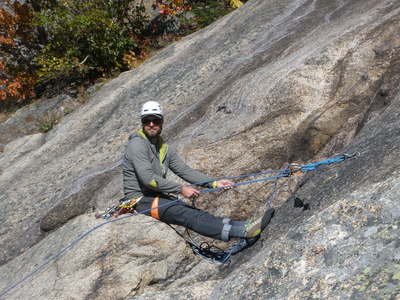 True Comfort ! Josh LeMay relaxes at the P3 be… 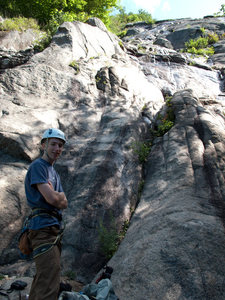 Isaac at the start of the climb. The first two… 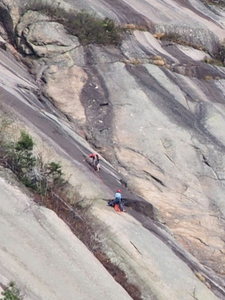 Ben Townsend, et. al. near the top of Lost in t… 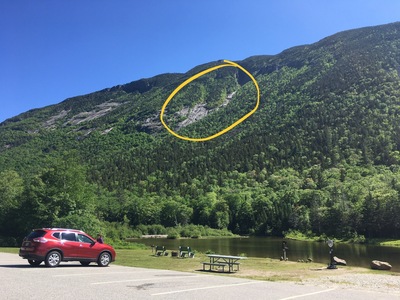 Standing from Willey House parking lot, this is… 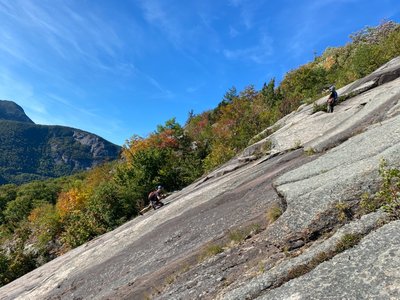 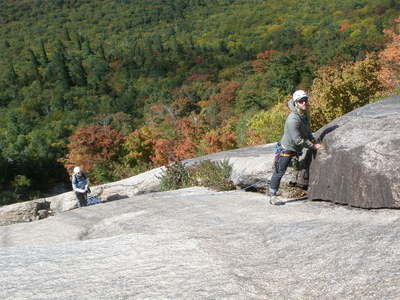 Josh LeMay about to start the corner crack of P3 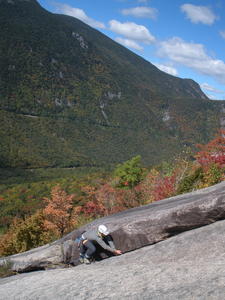 Josh LeMay climbing the corner on P3 with Mt Wi… 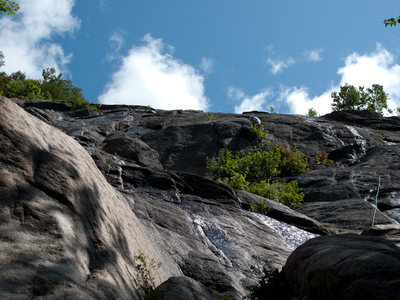 On the first pitch and using a bolt from A Bit… 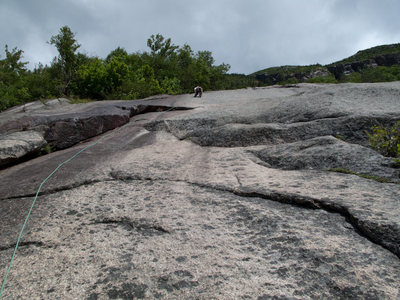 Looking up pitch three with a fun corner system… 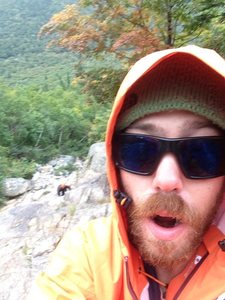 Free solo up pitch one 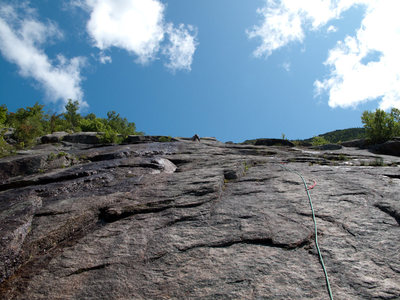 Looking up pitch two, we went right to avoid th… 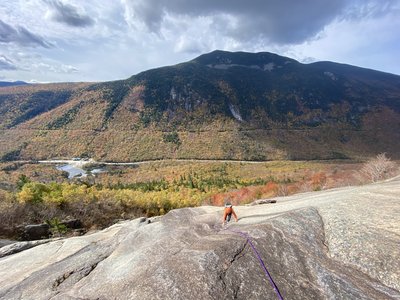 More About Lost in the Sun