The west face of the south peak contains many classic routes at Seneca. Highly featured and often exposed, it faces the vistor's center and the telescope viewing platform located there. On busy days, arrive early or you may be waiting in line for the more popular starting routes. These include (from bottom to top) Ecstacy (5.7), Ecstacy Jr. (5.4), Triple S (5.8), Le Gourmet (5.4), Prune (5.7), Old Man's Route (5.2) and Thais (5.5).To descend the west face there are two major rappel stations. The first is from the tree at the top of Conn's West/West Pole. The tree is slung with heavy-duty ropes and rings. 1. Rappel from the tree to a set of rap hangers near a deciduous tree on Conn's West. (50ft) 2. From there you can rappel to a large ledge on Old Man's first pitch with a tree to the north. (65ft) 3. Behind this tree are rap anchors to the base of Old Man's Route. (70ft)The second rappel is from the Traffic Jam notch. Anchors are located around the corner to the south from the notch. 1. Rappel from these anchors to the top of Neck Press (45ft). 2. Rappel from Neck Press to another set of anchors. (65ft) 3. Rappel the remaining length to the ground. (70ft)As of 2016, there are two additional descent options for the West Face, both of which require double 60m ropes: a set of anchors just north of the summit that rappel over Pleasant Overhangs (first rapp is single rope, second is double), and a set of anchors north on the same ledge as the Conn's West rappel that descend over Westpole (first rapp is double, second rapp is single).

Park near Roy Gap Road below the visitor's center on Route 33 or in the old parking lot to the north past the creek. If parking in the old lot, follow the trail over the steel bridge to a T-intersection.  Turn left and cross a wooden bridge.  Head up the hill and turn left onto Roy Gap Road.  From the parking lot below the Visitor's Center, walk the road to the low-water bridge.  Continue up Roy Gap Road.  Hike up Roy Gap Road until a trail is visible across the creek to the base of Seneca.  There is a new signpost here. Cross the stepping stones on the creek and hike up the switchbacks to the South End. The Southwest Corner area is from where the toe of the buttress comes down by the wooden steps all the way up to the old Hemlock Grove at the top of the Stairmaster Trail.   At the top of the wooden steps will be The Burn and Ecstasy Junior To gain access to the rest of the routes, follow the Stairmaster Trail up, up and up to the old Hemlock Grove, then east up a talus field. Follow a Y left for Le Gourmet and Old Man's Route, or right to go to Luncheon Ledge (below Triple S).  There are new signs along the trail pointing out many of these areas. 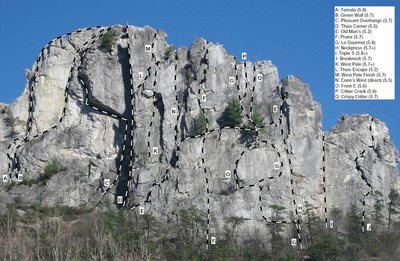 (Not my image) Selected routes on the South Pe… 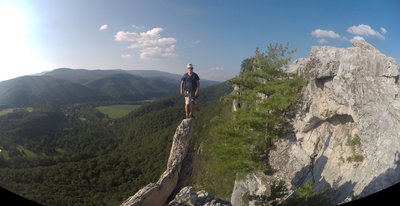 Climber at the top of "Bring on the Nubiles" (h… 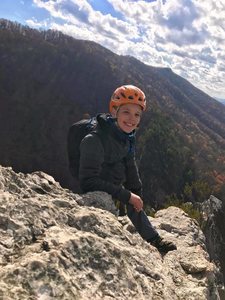 Alex on the South Peak. 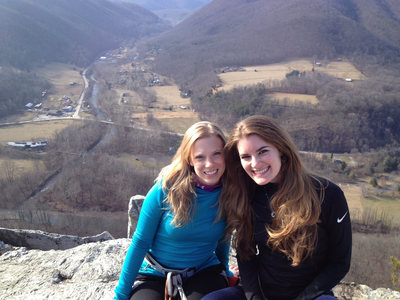 Enjoying the view from the top! 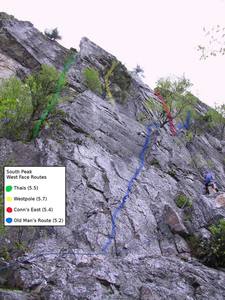 Some routes beginning at the base of Old Man's… 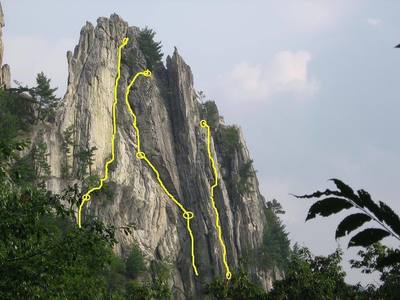 Some of the Seneca Sevens (left to right): Gree… 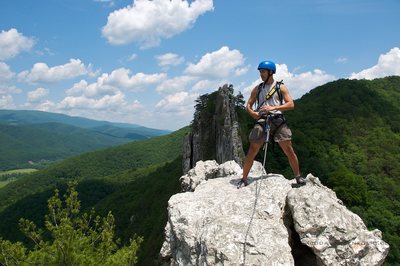 Mike on top of the South Peak. 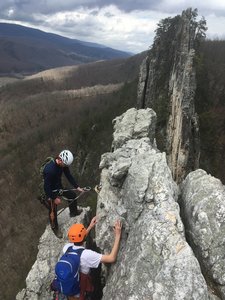 Looking north from the South Peak summit at the… 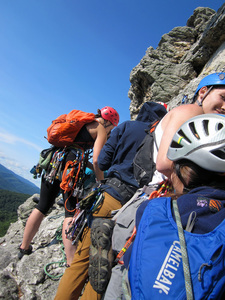 Squeezing in on the PO rap ledge 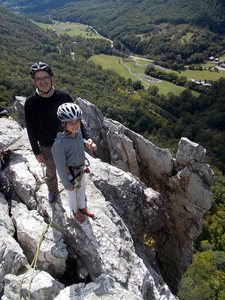 Maggie on her first summit 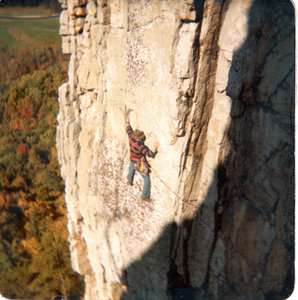 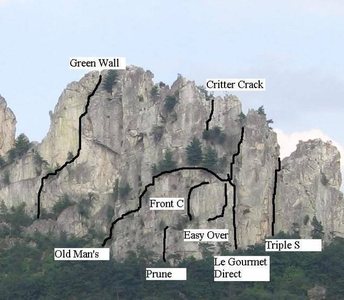 More Routes on the west face of the South Peak