One of Arizona's premiere trad climbing areas, Granite Mountain features beautiful white fine-grained granite and many wonderful routes in a high desert wilderness area. You're not likely to see too many other climbers here either, but you will see plenty of awesome cracks and beautiful natural lines.

Granite Mountain resides just northwest of the city of Prescott. Head out of town on Iron Springs Road to the Granite Basin Road turnoff (right turn), follow this road approx. four miles to either the Playa or Metate Day Use Area parking lots. This is PAVED all the way to the trailheads, so any vehicle is fine.

Take Trail 261 (Granite Mountain Trail) up to a trail junction at a green metal gate (1.7 mi). Head right (stay on 261) and continue up the main trail through a few mellow switchbacks. As you get closer to the area below the Swamp Slabs, you will run into a couple of big switchbacks as the trail starts to climb more. The first usually has rocks stacked in front or near it (to keep people from going that way), but people keep moving those and heading off into oblivion (manzanita, boulders, cactus, no trail). After that first switchback, continue up to the next one and look for a big patch of prickly pear down and right of the turn in the trail (~2 mi). The climber's trail up to the wall heads off here. The trail weaves around a lot and sometimes goes up and over stacks of boulders, so keep your eyes open and you should see it. Things have been deteriorating over the last years as climbers simply bore new trails instead of working to spot the fairly established route.

Note: Take the distances above as rough estimates (reasonably accurate for the Playa TH). I know of at least three potential starts to the approach, depending on where you park (Playa or Metate TH) and which trails you take to get there.

There's a great map of this in Bill Cramer's 2000 one-sheet guide
to Granite Mountain that would be a helluva lot easier to follow
than any text description. Go buy one!

There are probably many ways to get back down from the top of the cliff, but the main options are as follows:

Swamp Slabs:
Scramble across the top of the cliff line, past the obvious large alligator juniper atop the Debut area, then continue along the top for a big until you see a large boulder perched on the slabs down and left. Downclimb and friction scramble down and across in front (below) this boulder and down to ground in the bushes below, then follow a fairly worn path that takes you through bushes, trees and boulders (some downclimbing) back down to Pine Tree Ledge.

The Bowl:
This is roughly the area between Magician to around Green Savior or so. See Swamp Slabs descent.

Middle Section:
From around Green Savior to the Flying Buttress. If you started from Pine Tree Ledge area for some reason, see Swamp Slabs descent. If your stuff is over on the Front Porch, scramble across the top of the cliffline over to where you can scramble down to the start of the Coke Bottle Rappel route (above the Flying Buttress). Watch the first rappel as it is longer than half of most 60m ropes (~108 feet or so).

I've been told you can rappel from the station below the Great Roof down Candyland with a single 60m rope. I have not verified that. There are also stations for the first two pitches of Coatimundi Whiteout that can be rappelled. Not sure about one rope or two on those and have not heard from anyone who's done it.

Flying Buttress:
If you top out via Beaver Cleaver or High Exposure Exit, do the Coke Bottle Rappels (see below). If you decide to call it a day from the top of the Flying Buttress, you can scramble around the right side via ledges for routes that end below (Nose, Cat's PJ's, Said and Done, etc.). For routes that you end somewhere on the top edge of the FB, you can scramble down to a hole over below the outside end, but it's a little dicey getting to the ledge below that leads to the second Coke Bottle Rappel. The last guy I saw do it placed a piece to help protect the last move down to the ledge.

Coke Bottle Rappel Route:
As mentioned, this rappel setup starts above High Exposure Exit and Beaver Cleaver from anchors on a "single" boulder overlooking the Flying Buttress. Watch the first rappel as it is longer than half of most 60m ropes (~108 feet or so). It is up to you to negotiate this possible shortage safely and is an exercise I leave to you to figure out for yourself.

Rap 2: Rappel approximately 85 feet down the Coke Bottle Route to another ledge off the side of the Little Brother Buttress. There is an anchor on rappeller's right behind a large pine tree.

Rap 3: Rappel approximately 95 feet to the bottom of the wall. You can also rappel about 65 feet down to a large ledge atop the first Coke Bottle Pitch and then rappel again from there to the ground (~30 feet) if you're worried that your rope is short. Either way, watch the ends of your rope.

Right Side:
This would be from roughly Falling Ross over to Easy Chair. For routes ending over to around the top of Granite Jungle, you can easily scramble over to the Coke Bottle rappels. There are also some new raps that have been set up with anchors atop The Face, according to Bill Cramer's excellent one-sheet guide. One allows rappelling with TWO ROPES down the Soft Walk/Thin Slice/Pete's Thanks area. The other starts atop Bleak Streak and you can do three single-line raps down to the base with a 60m rope. Portions of Granite Jungle are rappellable from various slings starting at the base of the last pitch.

If you climb Jump Back Jack or Easy Chair, or you'd rather not bother with rapping, just scramble down the right side, threading through boulders and bushes, make a small rightward curl to hit the top of a gully to the right of Easy Chair and descend from there to the base of the wall.

There's a campground (Yavapai CG) right there in Granite Basin approximately 2.1 miles from Iron Springs Road (left side on the way in). There are lots of nice sites there, running about $18/night for a regular site. 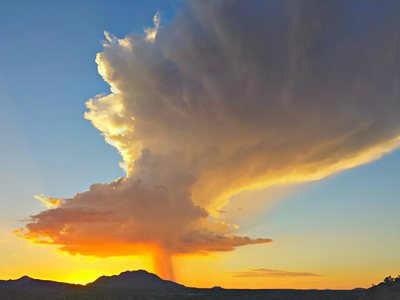 Storm over Granite Mountain as seen from hill a… 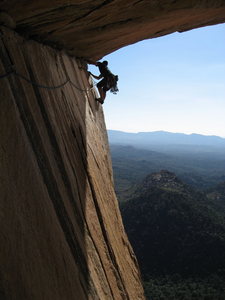 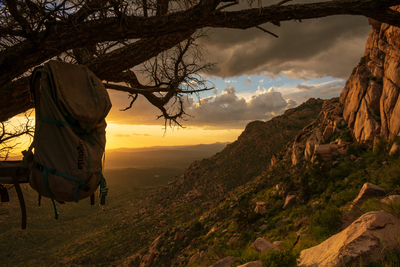 Sunset on the Front Porch 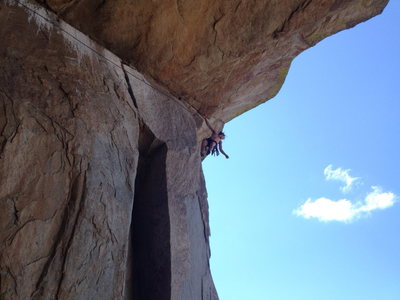 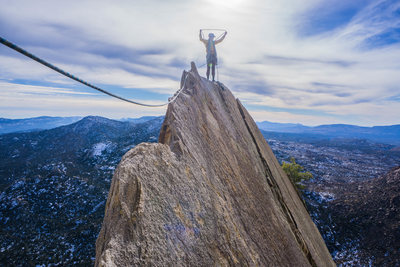 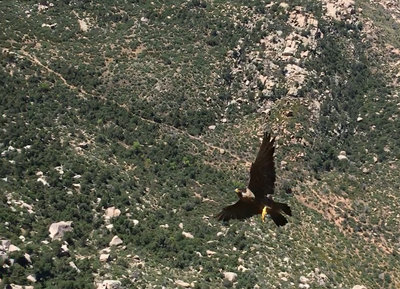 A happy falcon parent doing a zoom by while I w… 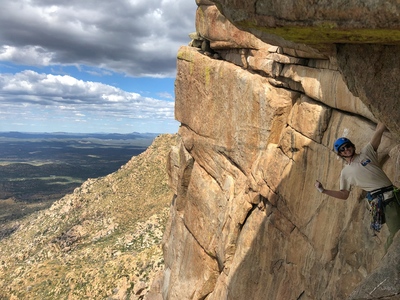 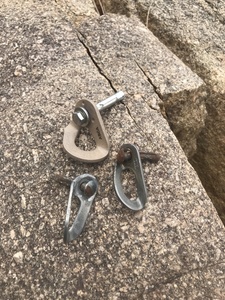 A bit of GM facelifting 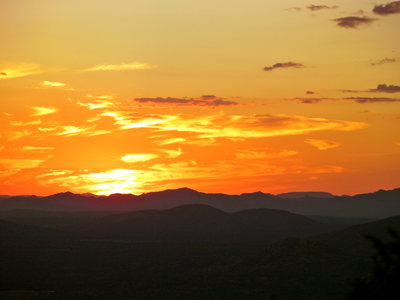 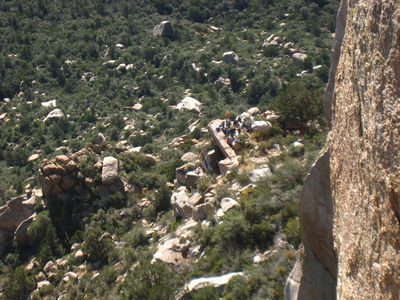 All Photos Within Granite Mountain