For years this climb was attributed to Doug Burnell and Doug Teschner, FA Oct, 1993. However, both climbers confirm this is NOT their route (see comment posting date 16OCT13) They actually did the FA of the 1st Pitch of what is today known as Table Scraps; their P2 traversed right under the large overlap to where the Picnic Table dike comes in, and then climbed up to the top via the dike to reach the tree of the "Bugs" anchor/rap station, which they thought was the top Merlin rap station!

Enough of history, back to the climb at hand!

P2  If desired, climb up and left climbing over the overlap a foot or two left of a small bush (bolt), then straight up the slab (2nd 3/8 inch bolt, 5.4-5.5) then further to the trees at the very top-most portion of the slab, passing one more new 3/8 inch bolt. Wire brush helpful, this pitch sees little traffic. There is an ancient rap station on a tree at the top. (This may have been the rap station used by Paul Ross in the 1975 FA of the slab.) About 125 ft 5.4-5.5 The hiking trail is about a 50ft bushwhack through the woods.

START  Belay at a 8 diameter (in 2013) maple tree, below a horizontal flake with a hole in it, 15-20 feet up. There is a small, left facing flake 20ft above the 'hole'. [or ALTERNATE START-belay at the Merlin belay and traverse in on the 2-inch ledge to the flake.] 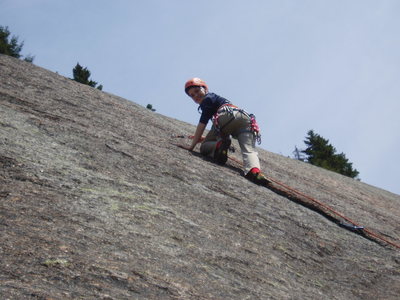 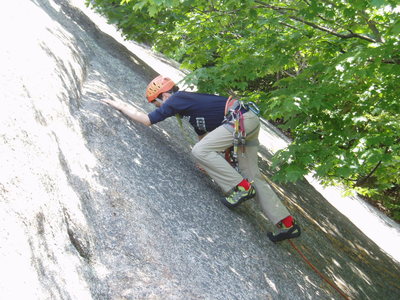 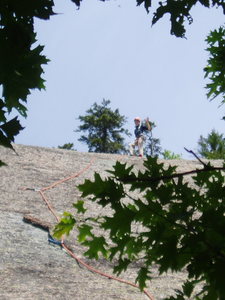 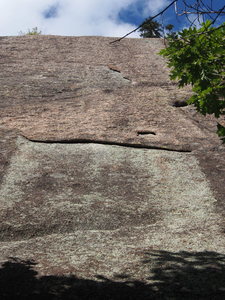 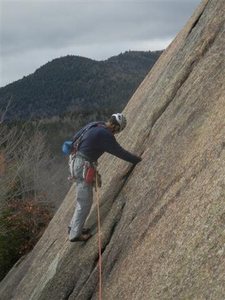