Clean rock, this route is a bit more continuous in nature than most of the routes on the cliff; nominally rated 5.8 or 5.8+ until there is more input.
Sir Hector was another knight in the Holy Grail legend and the half-brother of Sir Lancelot.

This climb is located on the semi-independent slab to climber's right of the routes "Dick to the Rescue"/ "Picnic Table". See "LOCATION", and photos, for directions to this slab.

APPROACH #1 from top of cliff: Start on the open slab of the hiker's trail, (25-50 ft above the start of the climber's path down to the "Bugs" rap station.) Move down the viewer's/walker's far left of the slab and look for a tiny cairn on the top of a boulder-like slab marking a step left . (This 'step' has been brushed and is generally clean, but depending on the violence of the last rainstorm this may be sandy, so take care! 10 ft drop off below! ) ...perhaps using the assistance of a pine-tree branch for the move. Once over this step, a crude path that leads left (facing OUT) and then down to the top of a dirty slab and a rap ring on a tree.

While it is possible to downclimb (5.0 -5.2 X) the 75-80 ft to the bolted anchor, the slab currently has quite a bit of gritty dirt, so it is recommended to set up a short rappel, which is actually more of a tension traverse, which takes you nearly horizontally to rappeler's left", past a small pine tree, then further left to an Aluminum-Bong Piton used as a directional to continue the tension traverse. [Note: 80 ft of 8mm makes this rap much 'cleaner' than 'messing' with 200 or 230 ft of rope!] Clip [both strands if doing a regular rap, the one strand if using a single 80 ft rope] of the rap rope through the bong for a directional (have a sling with 2 biners ready). Then down to a sloping ledge and the 2 bolt anchor on the left. It is easier for the second (and 3rd) if they pull [both] the end[s] of the rap rope up though the directional's 'biner and then re-clip through the directional as they rappel past, rather than arrive and have to unclip and re-clip. Retrieve the sling and/or the 80ft rope on the way out.

NOTE: In spring/summer of 2017 someone cut the cords of the rap anchor. They have been replaced. One cord was cut completely, the second was left in place (as if to extend the anchor) BUT was cut 90-95% through with the Quick Link "ring" still attached. Anyone using the "extended anchor" would have had a fatal rappelling "accident".

Rap with double ropes or a single 70m from double bolts at the top of the climb, which is located 35 ft below and 35 ft climber's/rapeller's left of the end of the Hector's approach path.  If you have only a single 60m, lengthen the anchor at least 15 ft with your slings. Swing / step right to a fine ledge just below, and to rapeller's right, of a small pine tree and other small trees. TCU's and/or small-med. nuts for the gear anchor. You do want to anchor here...there's a messy drop off below you!

P1 - Step down and left off the ledge, then up leftwards [TCU in flake] to the first bolt. Past this (crux) and up and slightly right passing two more bolts to reach a left-facing flake [ optional TCU / Yellow Alien]. Now up to the left, passing another bolt, on dark but clean rock to a ledge. [ Gear: Red (#1.5) Camalot in a hole to the right, NOT behind the flake ] Step left, then back right to a 8-inch partially-formed pocket, then up to the final headwall (bolt). 120-125 ft 5.8 / 5.8+  ?

This climb is located on the semi-independent slab to climber's right of the routes "Dick to the Rescue"/ "Picnic Table". See APPROACH #1", and photos, for directions to this slab. Approach #1 from the top of the cliff is given in DESCRIPTION.

APPROACH #2 from base of slab: This route is on a slab to Climber's right of the main slab. The slabs are separated by several feet of mossy, somewhat chossy rock, which forms a rotten "cave" at the base of the cliff. (This 'cave' is 25-30 ft right of the start of Picnic Table and 50-60 ft right of Bugs Eat Frogs). Scramble/climb up the opening 15 ft (5.2-5.3 or so) of Picnic Table to reach a vegetated ramp. Follow this up 75-100 ft passing the dike of Picnic Table and the bolt of Table Talk, beyond which there is one tricky move on dubious dirt above a slab. Continue up into a corner; up the corner 10-15 ft, and step right onto the belay stance.
It is possible to hike up the steep hillside right of the 'cave' and then scramble back and forth following the easiest path. Look for "daylight" up and to your left. Take care on the sandy ledges and scrambling, as well as the steep slope at the beginning; this slope is easily steep enough to maintain a fall if you slip or dislodge a lose rock from the dirt.  (Starting up even further right, nearly at the base of the gully, and going back left-and-up is easier and safer.)

The moves up to the first bolt are protected with a Red Camalot C3 ("TCU"); in fact "Red" is the watchword; a red C3 Camalot, or equivalent TCU's, and a Red (#1.5) Camalot. Nuts or TCUs for gear belay at the good crack above the good ledge at the bottom. 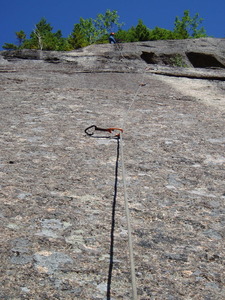 Looking up Hector's Highway from about Bolt#1… 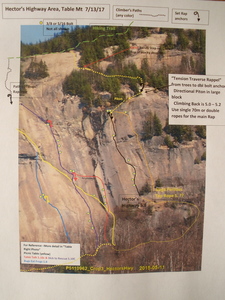