Fantastic moderate put up in 1954 by Batso and friends. The East Butt of Middle is a mandatory route for those looking to bag one of the fifty classics or for people just looking to get some great views of El Cap from across the valley. Mostly 5.6-5.8, this route ascends the springtime shadow line on the buttress. With an A0 section on the 5th pitch that can be climbed at 10c (slabby but well protected), this route offers a few variations above for those wanting to climb it numerous times or for when it is high season and you may need to pass folks.

The approach is easy, but steep. The descent can be the crux in the early season due to snow in the gully. Other than that it is classic, aesthetic, accessible and fun. Enjoy.

Drive, walk or bike on the Yos Loop Road past Bridalveil Falls, around the base of Middle Cathedral and park in one of the pullouts on the side of the road. Find the climbers trail that leads back toward the formation and slog up about 800 feet to the base of the route. It starts on top of a large offset pillar with oak trees adorning the top (great shade).

The route has two descents.

For the rappel:
DO NOT climb pitch 11 which is the last pitch. A 60m rope is sufficient, no rap longer than 90'. The top rap anchor is 6' down and 20' left from the top of the 10th pitch. From there rap about 20m to broken blocks (climbers) left of tree. Next rap is about 20m, again trending (climbers) left. See here for more information.

Getting To The Kat Walk: From the top of pitch 11 after the v-shaped grove, head mostly up and a bit right (just right of a rocky ridge terrain). This should put you on a bootpath with some cairns (very exposed in places) heading gently up and into brushy area. Hike for about 100 yards following mostly clear cairns. Scramble up some class 3 gravel-covered rock. About 300 yards from the top of the pitch you should get a nice view of the very prominent north prow of Upper Cathedral Rock. The trail then crosses some more exposed class 3 slabs as it gently turns left. Beyond the slabs, the trail is better worn and easier to follow (more cairns). It also levels off mostly. Follow it through the woods and brush (exposed in places once again, some winding up and down) till you reach the top of a downward bound talus gully. Look for cairns as its easy to head up too high or too low (and cliff out). Follow the gully down for ~100 yards. It ends with a huge drop (careful) into the Middle-Upper CR gully. At this point, turn right following a faint path into the bushes as it skirts the edge of the huge drop. You’re headed for the top of the Middle-Upper CR gully. This should all be hiking, if you're scrambling you're probably off trail.

Getting Down The Middle-Upper Cathedral Rocks Gully: Scramble down the gully (~200 feet) till you reach a bolted rap anchor on climbers right. Either do one double rope rap or (there’s an intermediate station; low angle raps) two single raps. The intermediate rap anchor is a slung chock stone in a bit of a narrow slot. Uncomfortable but safe for 2 people. Once off that rap, scramble down for another ~200 feet and look for another bolted (but damaged!) rap anchor. At the time (Oct. 2018) the anchor was one bolt with a flattened hanger w/ quicklink, backed up by a long sling around a large boulder. Several more bolts where there but looked busted up from rock fall. Rap this with a single rope. Maybe another 150' down the gully come to one last drop, maybe 15'. There was a fixed rope with several loops for hand and feet almost like a ladder. Scramble down this. Keep scrambling down this gully (500+ feet?) till you come to the main trail along the base of the valley. It was dark but we didn't see a clear place to cut back to the start of the route to grab a pack etc. if you left something at the base of the route. 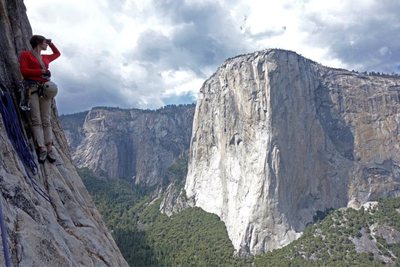 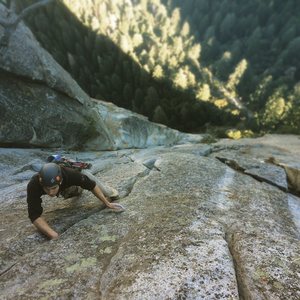 Quinn Miller on the 10th pitch. 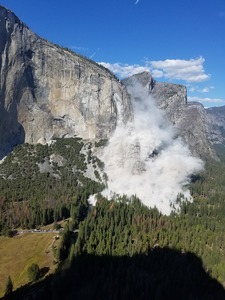 Stainless steel bends but is hard to break! R… 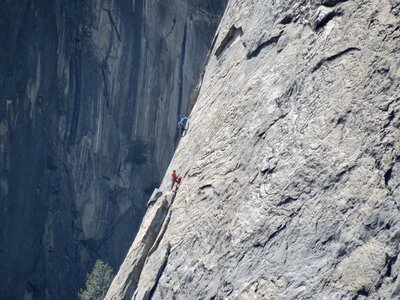 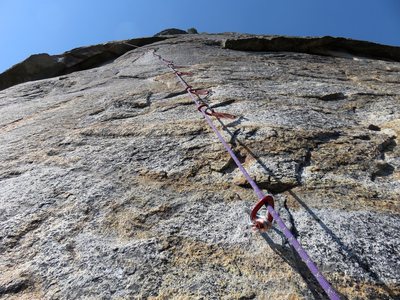 Pitch 5. This is the crux pitch of the route, f… 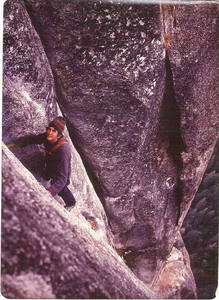 A 17 year old TrundleBum following one of the u… 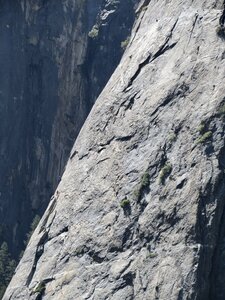 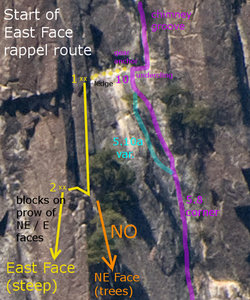 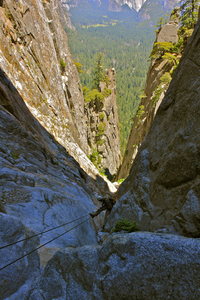 The first rappel on a very long descent 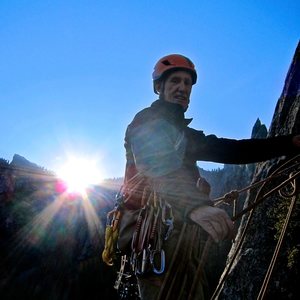 David belaying with the sun rising in the backg… 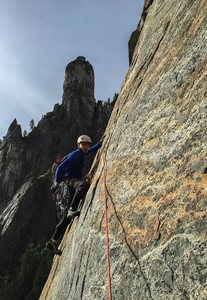 Brendan about to lead ladder pitch