This is by far my crowning achievement in Yosemite and one of the proudest things I've done in 22 years of climing. I spent 60 days spread out over 2.5 years establishing the route. Done ground up and drilled all by hand. Almost all of the climbing above pitch 6 was done rope-solo on the first ascent using bits of aid when I was too scared to free climb. For the free ascent I lead every pitch but one 5.10 up high.

The lower pitches are classic Middle Cathedral, bullet proof gold sculpted rock with incipient cracks and features with almost no crack climbing. Not as steep nor as well protected as many prefer these days but nonetheless amazing climbing. The climbing is generally slow and hard to figure out. Mostly 5.10 climbing except for two pitches of 5.12 and a single pitch of 5.11. Just climbing the first 10 pitches would make a great single day outing.

The upper half is very different than the lower. The rock continues to be amazing but the angle kicks back severely. The first few pitches on the headwall are slightly overhanging. More cracks appear on the headwall but it still feels more like face climbing. The meat of the route is pitches 12-18, which break down as 5.12-, 5.13, 5.13-, 5.13, 5.10, 5.12, and 5.12-. Though the climbing is a bit steeper it is still very technical and continues to be exciting.

Without a doubt pitch 13, 14 and 15 are the most amazing pitches and also the hardest. Each pitch is quite different and requires a different skill set. Pitch 13, "The Boulder Problem," is definitely just a boulder problem and was the crux of the route for me. Only 3 bolts long but it packs a punch. It is probably V8 if done correctly. Pitch 14, "The Athletic 12c" is more power endurance and it is the pump that will spit you off. No single move is that hard but the open laybacking near the end of the pitch is extremely sustained. I originally thought this was 12+ but subsequent ascents have said closer to 13b. The final crux pitch, "The Index 11d" is not powerful nor sustained but it lacks holds. This is classic granite houdini climbing. Stemming, scumming, smearing, back stepping, palming, and high stepping are the beta for this tight corner pitch. Jonathan Siegrist who attempted a repeat said he was totally baffled by this pitch and couldn't do many of the moves, he has climbed 5.15a...

The show isn't over after the crux pitches. A couple more engaging 5.12 pitches remain that are harder than most people will want. Alex Honnold almost wobbled off pitch 18 a runout 5.12-. He said it was kinda "real." I told him I put that pitch up rope solo 1800ft off the ground and he should stop being such a wimp. He agreed.

It only took 12 hrs after I finished the route for someone to attempt the 2nd ascent. Tommy Caldwell and Jonathan Siegrist gave it a go but were shutdown after climbing well into the night. Tommy sent all 3 crux pitches after working them a few times. Alex Honnold made the 2nd free ascent and first one day ascent two days after Tommy and Jonathan's attempt. He had someone jumar for him and he also had to climb well into the night. He managed to flash the boulder problem but had to work the remaining 2 crux pitches. He also yo-yo the The Index 11d pitch with the rope clipped above the crux (light duty if you ask me...) The 3rd free ascent went to Tobias Wolf the following spring who spent 3 days on it. It has been attempted numerous more times but no free ascents (as of 2014).

The best strategy is to climb to pitch 10 on the first day hauling a bag with a portaledge. There is a ledge to hangout on but not good enough to sleep on. No need to move camp higher as this puts you just below the business. Can fix ropes from the base of the crux pitches down to the camp easily. Climb to the top and then rappel back down grabbing your camp as you go. Most teams will probably want 3-4 days on route. All of the anchors are two bolts and it is setup with chains to rappel. After hitting pitch 6 it might be more direct to rappel the Smith/Crawford which also has good bolts and chains. Either way will work though.

Whatever you do resist the urge to hike up the gunsight and rappel into work on the crux pitches. This shouldn't be treated as sport climb like El Cap is these days. If I could manage to get the rope up there all by myself, hand drilling bolts from stances, a repeat ascent should be able to start at the ground and go to the top.

Here are some stories about the climb: 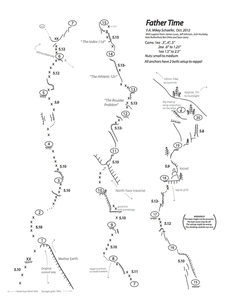 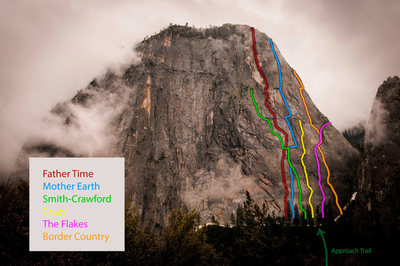 Route lines on right side of Middle Cathedral 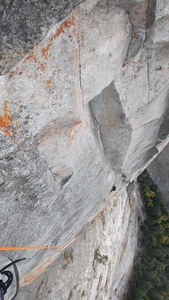 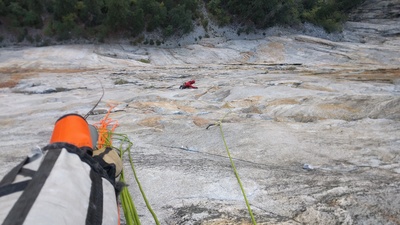 Great golden rock on the 5.12s down low 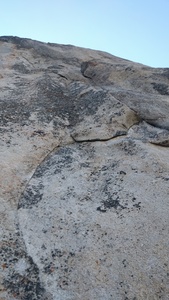 A straight on shot of the boulder problem pitch