As youre approaching from Emerald Lake, the western edge of the 3rd Buttress forms the right skyline of the impressive north face of Hallett Peak. Youre aiming for a the large, vertical V-groove that forms the second pitch of the route, close to but still on the eastern edge of that skyline.

P2) Follow an enticing crack that diagonals up and left to a slot which becomes the prominent V-groove feature that dominates the second pitch. After a short respite on low angle terrain, the climbing quickly becomes steep and sustained through two small roofs. Its possible to set a hanging belay below the second roof as we did, but it is much better to continue up for one spectacular pitch, M6, 150 feet.

P3) Climb some classic and fun lower angle alpine terrain up and left, and at about halfway, gain a short but spectacular double-crack, right-facing corner system followed by a thin seam on a face. From the top of the seam, make another exciting traverse left to the top of a pedestal just right of the prominent chimney system splitting the upper face, M5, 210 feet.

P4) Make a big (read: spooky) step left from the pedestal to gain the chimney, and continue up passing several small chockstone roofs to arrive at a large alcove in a long pitch. Though not as great as the other pitches on the climb, this pitch is still as good as anything you would encounter on Hallett Chimney or similar climbs throughout The Park. This chimney can easily be seen as you approach the face and was first climbed as part of the Kor-Van Tongeren route, M5, 200 feet.

P5) Climb a steep, flaring squeeze chimney on the left side of the alcove as Kor and Van Tongeren did, or climb the steep and engaging corner on the right side of the alcove as we did. Either way, exit left through a passage way underneath a massive chockstone onto an exposed northwest-facing ridge. Continue up the ridge for a dramatic finish up a thin seam with perfect pick locks up a steep face, M6, 200 feet.

Thoughts on ethics: we climbed the majority of the route without crampons on. We used ice tools and gloved hands (and sometimes bare hands) as with any other winter mixed route, and I think its much easier to minimize the scratches left on the rock by tools than those made by crampons. The crampons spent most of the time clipped to the back of my harness, ready to go back on if needed, but they never did. Give it a try. 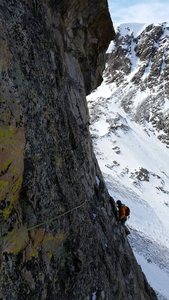 Doug Shepherd on the 3rd pitch of Analysis Para… 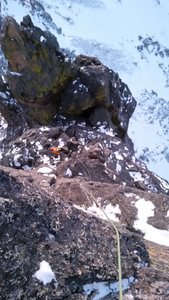 Looking down the last pitch of Analysis Paralys… 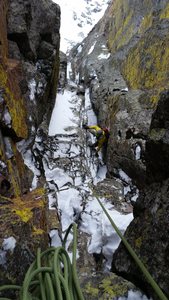 Doug Shepherd on the 4th pitch of Analysis Para… 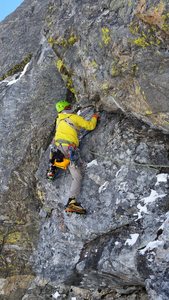 Doug Shepherd on the second pitch of Analysis P… 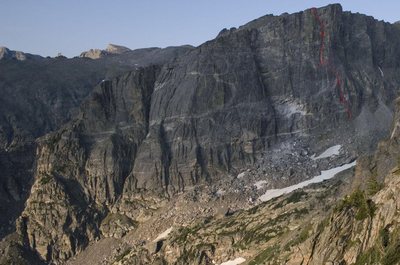