A fun little route that is the perfect choice for a beginning leader. Simply climb the route to the anchor, passing old bolts. [see 2016 NOTE, bolts replaced]  Originally listed as a "sport" climb, probably because the only protection is the bolts, I re-assigned it as a trad climb lest one make the effort of the approach to find the run out a bit too "sporty". R Hall NH Admin.

[2016 NOTE: Somewhere along the line this climb got "cut in half", probably because the "natural, straight up" line above the "pitch 1" anchor is about 5.5 -5.6 R and totally out of context with "pitch 1." But the "second pitch" (or, almost certainly, the second half of a one-pitch FA) goes up a dike to the right of the "straight up line" above the anchor.

Webster's Editions 2 and 3 state this climb "climbs the right side of the slab past several bolts 5.3". Here is what I am nearly certain is a modern version of the correct route description:

P1 - Start at an obvious tree-root and dirt ledge at the right side of the slab. Climb the slab and belay at a bolted anchor off to the left. 85-90 ft 5.2

If you were to clip the first 1973 bolt coming from the bolted P1 belay anchor you will know why this climb was nearly certainly first climbed as a one-pitch climb without the P1 anchor. [ Think about the rope placement and how the leader would fall if the rope ran from the P1 belay to the 1973 bolt....the rope would "flip" a falling leader. Thus, I'm nearly positive the FA "went" as one long pitch from the ground. ]

DESCENT: Rap or lower with one rope from the dbl bolt anchor, then a 2nd rap to the ground.

This is the first route you come to when hiking into the cliff. The "P1" anchor is not visible from the base.

Bolted anchor at the end of "pitch 1", double bolt anchor at top of P2. 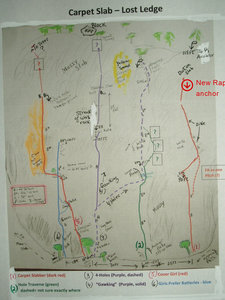 Topo/Sketch for the whole Carpet Slab 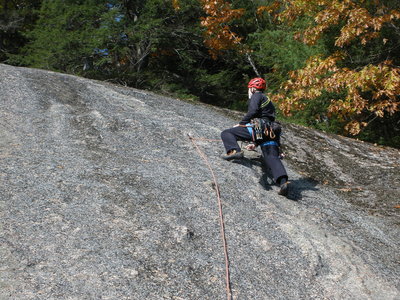 RW at the first bolt on pitch 2 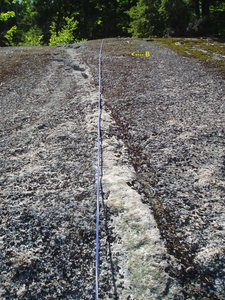 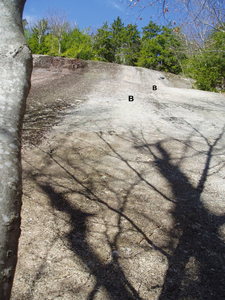 Far right side of the Carpet Slab - "Carpe… 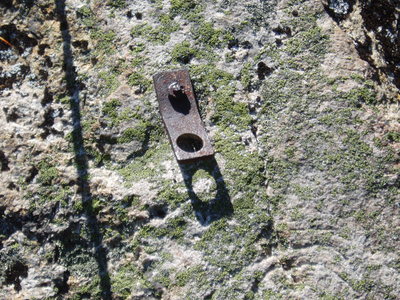