This route ascends the middle of the 1st buttress of Hallett Peak. It is characterized as a right-facing dihedral system that winds its way up three pitches through the headwall of the 1st Buttress. From a distance, the dihedral system is clearly visible just to the left of a very large roof. Though primarily a scramble over moderate terrain, the 1st two technical pitches are good, and the position of the last pitch is spectacular featuring an off-width crack that has great exposure.

There are numerous starts to this climb and others to the left of it on the 1st Buttress. Most of the starts can be referenced from the base of Hallet Chimney. Easy ramps lead up and to the left. As the ledges are climbed, weaknesses will appear, leading upward to the right, into the bowels of the face. Chose your path. The goal is to reach a series of ledges in the middle section of the face described as the white bands. Lower angled slabs with cracks and the occasional shallow corner mostly characterize the climbing found on the initial pitches. Don't worry about being off-route as there are multiple ways to go. The best start would be to do the initial pitches of the Great Dihedral. Eventually scramble up to the highest of the ledges in the white bands, about 100 feet left of Hallett Chimney.

P2. Chimney up the very wide, right facing dihedral above to gain the top of a little pillar. 5.5.

P3. Face climb to the base of a shallow, right-facing dihedral system. Span from right to left across the wide crack and climb on the face of the outside edge of the dihedral. The exposure here is very nice. Scramble over easy ground to the top of the buttress. 5.6.

For a descent, it is best to use the East Ridge. You are very close to it when you top out on this route. Head left or downhill, following the cliff top. Look for cairns. The cairns lead to a set of chain anchors. One 100 foot rappel will lead to ground that is safe to scramble down. Follow cairns down towards the low spot in the ridge. Look for a very faint path leading off to the left. There should be cairns marking the way. At all costs avoid getting into the obvious snow or scree gully that is in front of you. Eventually a small col will be encountered where the option exists for easily dropping into the ugly snow or scree gully mentioned before, or turning to the left and having a delightful trot down ledge systems that make up the lower section of the 1st Buttress. Cairns mark most of the way and after a while it becomes obvious which way to go. This descent brings you back out at the base of Hallett Chimney.

Take along a standard RMNP rack. Don't worry about the RPs, but you might feel comfortable taking along a #4 Camalot. 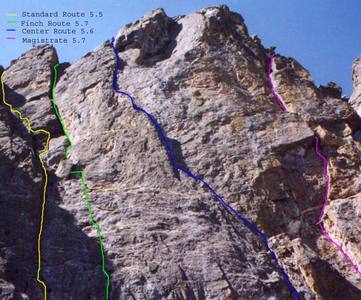 Upper half of the 1st Buttress. 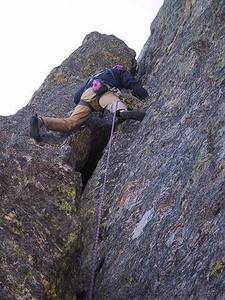 Climbing the wide crack near the top of the rou… 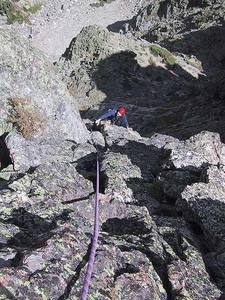 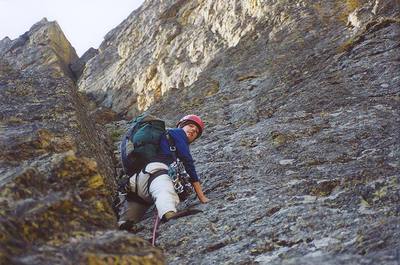 This is one pitch from the top.