This is one of the earliest modern desert routes, it was the first on this 6656 foot tower, and it was put up by the dynamic duo of astrophysicist Huntley Ingalls and the incomparable Layton Kor in September of 1961. Arriving in the valley before their friends Fred Beckey and Harvey Carter, they started up the route on a reconnaissance, climbed a 100 foot pitch, continued with a more challenging pitch requiring some aid climbing, and rappelled. The next day they mixed aid and offwidth/chimney techniques as they ascended the third pitch. The crux required two bolts for aid climbing. Interestingly, when Californians Chuck Pratt and Steve Roper made the second ascent in 1963, they found many pieces of lumber strewn about the summit. Perplexed, they considered various explanations that did not add up. Suddenly, they realized that there had been an advertisement with a car and a shapely model on a desert summit for which they had built a wooden platform (youtu.be/I8YpCTuKLec). Who would have thought?

In contrast to many desert routes, this climb utilizes calcite-coated Wingate sandstone for much of the route. This means the rock will seem stronger than average in strength; however, this also means it will be slick in spots due to polished calcite.

It is of the utmost importance that you bring a gym/sport climber with you to follow you on this routes, especially if they are European. Doing this will make this route an even more memorable experience. Trust me. Additionally, do the route in the winter. You can get 1/2 price motel rooms in Moab and the crowds won't be there.

To reach the route, follow the directions to Castleton Tower. Take the new trail and head to the left (North) side of the tower to bypass the short cliff band. It should be noted that this cliff band is fun to down-climb in the dark, so you may not want to miss it. After bouldering up a short, exposed bit, head left towards the route - a big, fat dihedral on the South side as you approach the tower.

P1 - this is a 140 foot, 5.easy pitch that splits into 4 sections. It starts at a wide dihedral crack/chimney system, goes up about 20 feet to a big ledge and continues past a bulge. Head slightly left to a fat dihedral/squeeze chimney that puts you onto another almost as big ledge (2 bolt rap anchor on the right). Continue up another short chimney to a belay at yet another big ledge (gear anchor). 5.6, 140'.

P2 - head up the obvious crack system. It is weird and is more or less a double crack system. After ~20', the left crack goes up past a bolt and continues as Black Sun. The right crack is the original line; however, you could continue up Black Sun a bit further and angle right later. You'll figure-out how to do it. Double #4 Camalots and a bit of leap-frogging can make this more reasonable. Note, face climb around some large, loose blocks in the last 25' of this pitch. Be very careful with these, they shift. This pitch also takes a couple of bomber medium to large stoppers towards the top. At the end of this pitch, you will be placed at a ledge with a bolted belay. Oh yeah, it's honest 5.8, 100'.

P3 - this is the business (true 5.9). Most of it is wide, but most of the protection is not. All I can say is don't get tunnel vision at the crux, which has the 3rd bolt near it. If you are a runt like me, you can squeeze into the chimney after the crux and feel secure. If not, there are face climbing options on polished calcite. There are protection options deep in the chimney. This pitch is where I got to hear my German friend curse in two languages - it was awesome. You arrive at a 3 bolt anchor. 5.9, 3 updated protection bolts & gear, 110'.

P4 - you can either do 5.7 face with a hand or foot traverse right or the 5.similar chimney to the left. Definitely do the chimney if someone in your party is not a trad climber. You can easily watch them flail. This pitch is not too long compared to the 2nd and 3rd. There is a 2 bolt anchor just below the summit. You'll have to pee by now, so go ahead and get on the summit (on belay of course). 5.8, 80'.

The route does go into the shade mid to late afternoon. It can be blazing hot in the quiet sun to unpredictably cold in the shade and wind, so be prepared. This route can be incredibly popular with even foreigners queuing up. Fortunately, you can descend from most points quite easily.

You can also rap the North Face in 3 rappels with double ropes.

Note: You can and should back-up every belay. Also, there is calcite all up and down this route. I hate calcite - except for one place where you agree with me.

A standard rack will work fine on this route to #4 Camalot; however, doubles may feel a bit heavy for 5.10 climbers. If you are a little squeamish, then you could bring Big Bros, #5-6 Friends, and/or color-coded 2x4s (reminiscent of the old days) cut to different lengths. There are three new bolts on the crux pitch, so don't despair. Bring 2 ropes to rappel.

Finally, two shoulder gear slings for the leader and belayer will be vastly more appreciated than having gear dangling off your harnesses. 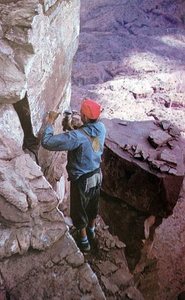 Layton Kor drilling a bolt on the FA of Castlet… 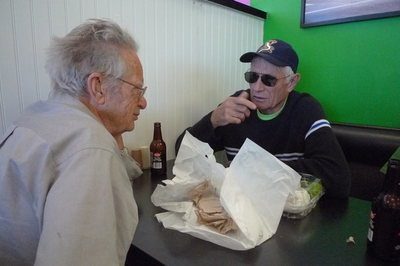 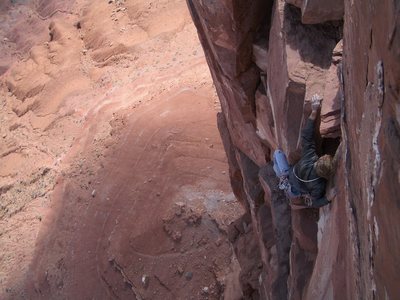 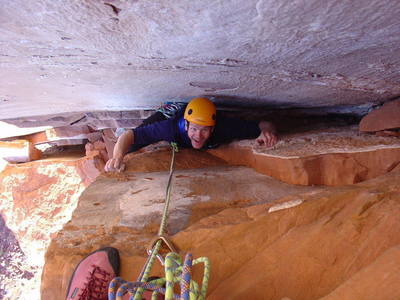 Anders stuck in the chimney on pitch one. The E… 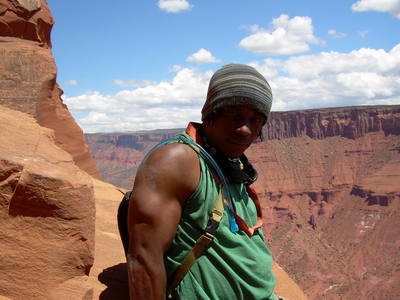 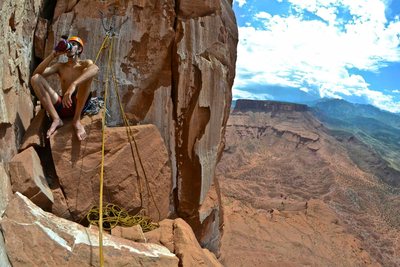 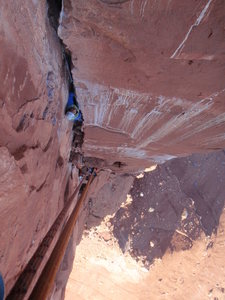 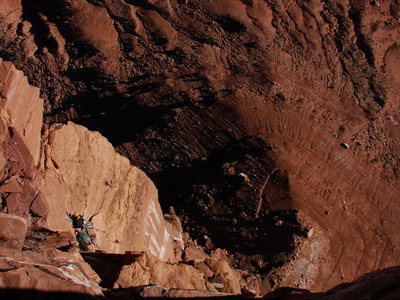 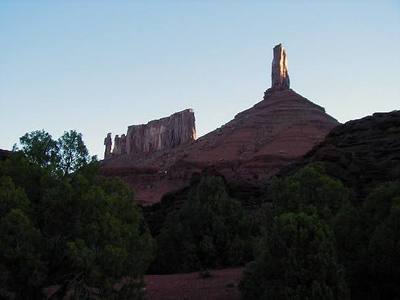 Castleton Tower is on the right, The Priest and… 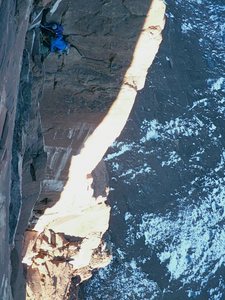 Out of the sun on a cold day. On the ledge afte… 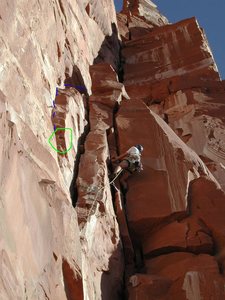 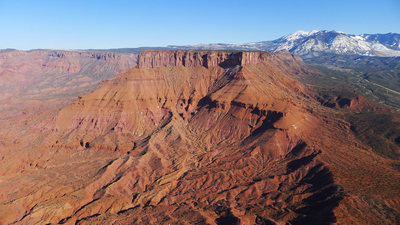 view toward the La Sals