Pitch one climbs the vertical wall just right of the Kor-Ingalls approach corner. Two close bolts on steep jugs are followed by pumpy cam placing in the horizontals of the upper wall. Smallest alien to .75 camalot. Belay on an natural anchor, under a big roof, just out of sight of the folks on Kor-Ingalls. 5.9

Pitch two starts by climbing 20 feet up the "Passing Lane Chimney" past the roof to a horizontal crack. Traverse this crack with cam protection and tip toe holds above the roof. From a nice perch on the prow at the lip, make a few runout 5.9- moves up to the first bolt. Follow the nice holds on the arete, past the second (last) bolt. Scary small holds, a long way above the bolt lead up a panel to the big ledge. The obtuse corner, just right is tempting but harder. But set the belay right of Kor-Ingalls for best anchors and more importantly rockfall shelter.

From the ledge, rejoin Black Sun. Most Kor-Ingalls parties are taking right hand version of the second pitch. That means the left hand crack up to Black Sun is usually open.

For these two pitches a lite rack, from smallest aliens to #3 Camalot. Yellow, red, and green Camalots are great for the roof-traverse crack. The bigger cams are nice for the belays.

Marsha Trout helped me bolt this a few days before Wyatt and I climbed the new pitches, Black Sun (5.10), and Burning Inside (5.10+).

All are rappel, hand drilled, 1/2", plated, Rawl five-piece, power bolts. After pounding the bolts in, the "pounded bolt" gets removed, and then a new painted one gets put in with a short handle wrench (to prevent over-torqued bolts). So none of these four bolts were ever hammered upon.

I wanted to lead bolt it, but didn't want the inferior bolts produced. First I top-roped the upper part of the arete, while waiting for a turn at the KI rap anchor. Next day, pitch two, I led up, marked the spot for bolt #1, and then braved the down-climb back to the "passing lane" chimney. Finally, from rappel, I spaced the second bolt so that the level of runout is similar to Burning Inside. For me the gnarliest bit is the run above the last bolt. Wyatt Payne led it first, on a full South Face ascent, and liked it.

There are no bolted belays for the two pitches. No need for them because there is good crack pro on the ledges. Also, the first pitch anchor of Kor-Ingalls is the only location where a single 70m rope will get trail-users from the big KI ledge back to their packs. 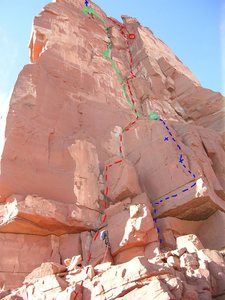 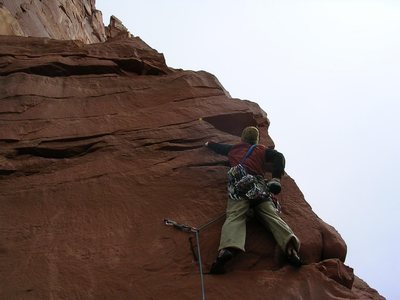 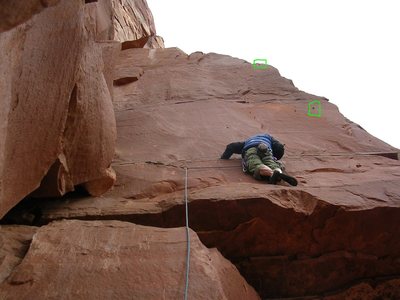 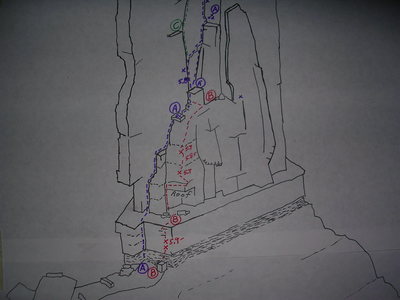