There are dozens of granite domes and hundreds of thousands of boulders within a couple hours drive of Bangalore, most waiting to be developed. Serious climbing in the area began in the 1980's, with a group of daredevils running out entire rope lengths on sketchy, flaky slab. Since then, the area has seen gradual development, with a noteworthy spurt in the pace at which new routes were being added, starting in 2014. As of the end of 2015, there were about a dozen crags and over 200 documented routes as well as a couple of hundred boulder problems. This is barely the tip of the iceberg, with potential for many hundreds more routes and problems.

The rock is mostly compact granite, and crack systems are few. Boulder problems often involve crimping on tiny, sharp holds, and the majority of the rope climbs are bolted or mixed. Some bolted areas involve significant runouts between bolts, though usually on easier terrain. For instance, routes in Savandurga and BM Betta have runouts exceeding 15 m (50 ft), though usually (but not always) on 5.5 or easier terrain. Most other crags though, especially the single pitch areas, are fairly conservatively bolted. Most boulder problems are well protected by a single pad and an attentive spotter, though two pads are sometimes handy. Very few problems require as many as three pads. The majority of the routes are accessible to a team with a 60 m rope and a dozen draws. A light additional rack of cams and stoppers lets one get on nearly everything else, though there are a few juicy off-widths that would require Big Bros or similar and are still waiting to be freed.

From Turahalli, the local bouldering area in south Bangalore, to the 1200-ft tall Savandurga monolith, a variety of climbs offer plenty of day-long or weekend outings from the city. The best climbing conditions are experienced from the end of November until the end of February, with cool mornings and evenings, though daytime highs can still get close to 30C or 85F. The city also hosts a small number of bouldering and climbing walls/gyms, and some limited selection of climbing gear can be purchased at one of the Decathlon or Wildcraft stores (plus a few others) in the area. If looking for partners, gear, or beta, it is easiest to connect with local climbers through the "Bangalore Climbers" Facebook group.

A guidebook for the area was recently published (Jan 2017, see picture below) that covers the climbing history of the area and nearly all the known bolted routes (and several gear routes) that are not off-limits to climbing. In addition, topos and descriptions can be found in the photo albums and files of the Facebook group.

Bangalore Climbing Initiatives, a non-profit volunteer-based group, has been active in fundraising for new bolting projects, conducting climbing workshops, and organizing conservation activities in the area. Other groups and organizations in the area include GETHNAA, Equilibrium Climbing Station, and a number of smaller climbing clubs.

Bangalore (locally Bengaluru) is a large city in central South India, and has an international airport serviced by flights from many major cities in Europe and Asia. Buses, trains and flights connect Bangalore to other cities and towns in India. Most of the crags are about an hour or two from the city by car (depending on where you are in the city - traffic can be horrendous). 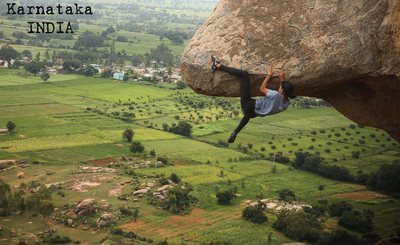 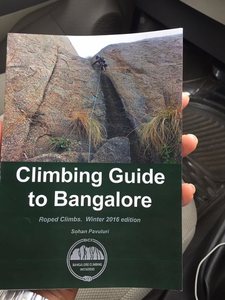 All Photos Within Bangalore Area and Southern Karnataka