Start on the far right end of the west face and ascend the most prominent diagonal ramp up and leftward to the anchor bolts atop Spaghetti & Chili. About halfway where this main diagonal starts to dwindle, instead of veering lower toward the "cave" along Penelope's Walk, continue onward across that dwindling diagonal past its narrowest for exposed shuffling excitement, before it broadens again for the last few walking steps to the anchor bolts. Another route called Goldilocks (rated 5.7 in the books) crosses path near midway to go up and over two small roofs onto a lower sloping topout, if one needs an earlier easier bailout exit.

Odysseus was husband of Penelope and king of Ithaca. He tried to dodge the Trojan War but got busted, and went leaving wife and son at home. Odysseus came up with the Trojan Horse ploy that sacked Troy. Afterward, along their way home, Odysseus and crew encountered Cyclops and blinded his one eye. Cyclops told his pop Poseidon, who punished Odysseus by fouling up his voyage itinerary with long layovers and lousy navigation, adding 20 years to his return trip. Time passed and peeps in Ithaca figured Odysseus dead. Penelope held out hope tho, remained faithful, and fended off suitors. Meanwhile, Odysseus got to bang Circe of Aeaea in order to save his crew, and later had to bang Calypso of Ogygia for 7 years before able to continue home. Odysseus finally got back to Ithaca, but in disguise to first gauge Penelope's faithfulness. During a contest for Penelope, Odysseus finally revealed his identity after shooting an arrow through a bunch of axe heads.  He then killed all the suitors who had tried to get with Penelope. Odysseus and fam lived happily again.

Pro to 2.5", bolted anchor hangers without rap rings. Walk off. 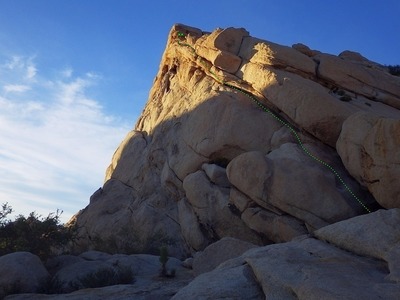 Odysseus' Shuffle right of and above much of Pe… 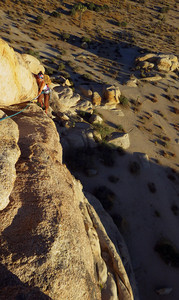 Hannah balancing across the dwindling walkway.…