This may have been the cause of the Oscar Mayer / Crescent name mix up? I've added this route even though I have not climbed it. Looks like it is the same route as was put into mountainproject as "Ben Zen Send".

START- At a left facing arching flake five feet right* of Touch of Grey. Climb this to a right-to-left diagonalling crack, then up a series of crescent cracks to bolted belay. 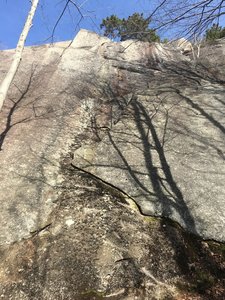 At the base of Crescents with the top crescents…