This is a fantastic route and is extremely popular, among guided and non-guided parties. The route is significantly longer than the Owen-Spalding, the rock is generally excellent and the views spectacular. This is also a good winter route as it melts off quickly. One problem is that it is difficult to escape off this route in case of bad weather.

If you free solo this route it goes very quickly. Not only was the first ascent by Glenn Exum done in this manner, but the second ascent was made by Paul Petzoldt on the same day, AFTER he had guided his clients to the summit via the Owen Spalding! However most people rope up on this climb, and if you pitch out the whole thing it can go very slowly. The climb looks long, and it is even longer than it looks. Consider simulclimbing the easier sections. The Grade II comes from the Ortenburger-Jackson guide, but in my opinion this must assume you are soloing.

If you have never climbed the Grand Teton before, I recommend purchasing the short pamphlet guide at the ranger station. This contains a photo of the west side of the summit, which is invaluable during the descent. Chances are there will be many people on the descent and you can simply follow the crowd. However if it is off-season I wouldn't count on following everyone else.

Do not panic on this route if you wander off line. Many variations are possible and usually alternatives work out if you are careful. For example, the first two times I climbed the route we bypassed the Friction Pitch (by mistake).

Your first goal is to reach Wall Street, a giant ledge leading to the crest of the south ridge from the west at around 12,800'. This ledge can be easily viewed from the Lower Saddle if you know where to look. Begin from the Lower Saddle as for the Owen Spalding, passing left of the smooth pinnacle known as "The Needle", then up the gully on the right, close to the Needle. If you are lucky you will find the tunnel above here known as "The Eye of The Needle", but it is not necessary to pass through this feature. Above here your route diverges from the Owen Spalding as you traverse right, crossing a broad and relatively easy couloir to the start of Wall Street. This couloir drops straight down from the Upper Saddle and has led to disaster for many tired climbers descending from the Upper Saddle, assuming it is the way down (it cliffs out). Take note of it.

The Wall Street ledge is huge and easy to walk along, until the very end where it suddenly becomes exposed and narrow. Rope up here, unless you feel like repeating Glenn Exum's famous leap. Actually, I've never seen anyone leap to span this difficulty, as you can simply make a long step or hand traverse. Still, it is very exposed and only climbers in a great hurry will do this unroped.

Next comes the Golden Stair pitch, which ascends directly up the ridge up a steep, knobby face. This pitch looks harder than it is, because it is very exposed and the protection is not abundant. Plenty of knobs make the climbing enjoyable. After this pitch the difficulty eases and if your party is experienced you may want to pack the rope for a while, or simulclimb. Follow a horizontal section near the ridge crest, then move left to gain access into a gully which slants up and right. This is called the Wind Tunnel. This leads, after a number of pitches, to the base of the Friction Pitch.

The Friction Pitch is called by some the crux of the route, it is not well protected but the difficulties ease shortly. Above here scramble for 2 more pitches, following the line of least resistence. Look for a section above where you can cross back to the west side of the crest to avoid a slabby tower.

Above you is the "V" pitch, one of the most exposed on the route. Climb the obvious SW facing dihedral above, with excellent protection. I feel this section is the crux of the route. After this pitch the ridge levels out and is quite easy for a short section. The next difficulty encountered following the crest is called the Petzoldt lieback pitch. When I last did this pitch in September it was covered with ice and quite a challenge in rock shoes. Above here you can climb a small 10' tower directly via a crack and in another 100' the ridge becomes broad and nearly level. Here you can unrope and scramble to the east of the crest to the summit.

The Exum Ridge is the south ridge of the Grand Teton. The steep lower portion of the ridge is included as a separate route, and makes an excellent direct start. However it is significantly harder than the Upper Exum.

Standard light rack. You do not need to bring 2 ropes.

The Owen Spalding is the standard descent. This can be tricky to find if you are not familiar with it, but in the middle of the summer you are more likely to encounter long lines. There are normally two rappels done. The first rappel down "Sargeant's Chimney" is less than 70 feet long. The second and final rappel is about 120' and ends at the rope-up spot for the Owen Spalding (only around a hundred yards from the Upper Saddle). If you only have one rope, this section can be done in two 75' rappels if you climb up and traverse south to another anchor. 75' down you will find a chockstone (which was covered in ice last time I did this) wrapped in slings to facilitate the final rappel. Here is a useful 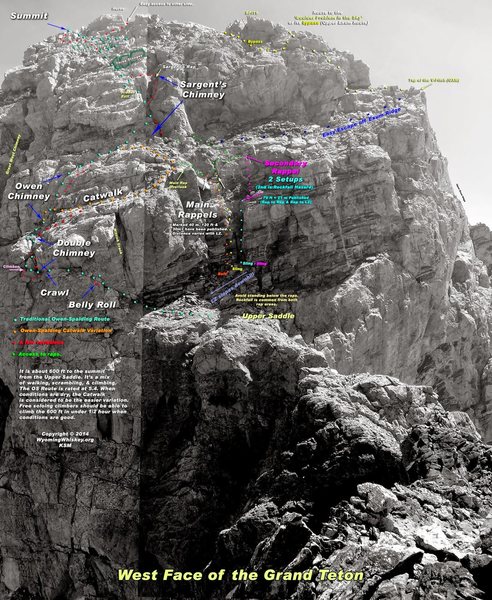 Beta photo with tons of useful info copied from wyomingwhiskey.blogspot.com/. Check out their web site for an updated photo and much more info. .

In case of long lines on the rappels, there are alternate final rappels to the right (south) of the main one. I have used an anchor point from which you need two 60m ropes, providing a quick and fast descent. You can reach this anchor point by scrambling along the ledge below Sargeant's Chimney, or you can also downclimb the Exum Ridge until above the "V" pitch, then descend easy ledges on the west face.

Going down from the Upper Saddle it is important to stay west, DO NOT head down the broad gully which is immediately west of the Exum Ridge, for it cliffs out and has resulted in several tragedies. Even as low as Wall Street, it is easy to contour west and back onto the normal descent.

After the "V" pitch, it is possible to escape to the north down a rubble covered ledge system to join the final Owen Spalding rappel. There is another anchor in the middle of this ledge traverse which in one 60m rappel puts you right at the start of the Owen Spalding (about 100' right (south) of where the normal rappel ends). This

Beta photo with tons of useful info copied from wyomingwhiskey.blogspot.com/. Check out their web site for an updated photo and much more info. is useful for details. 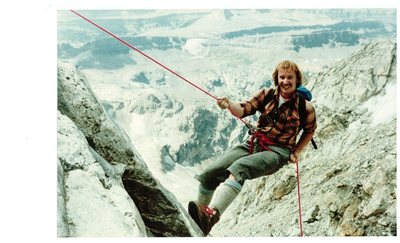 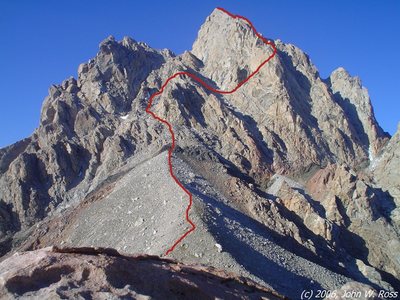 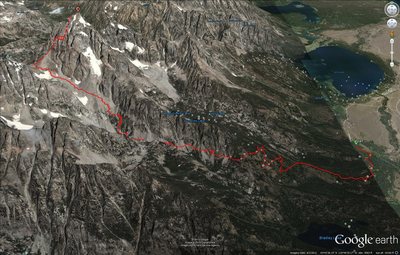 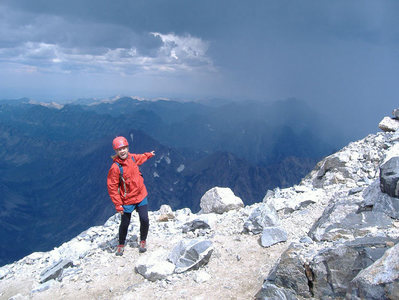 Getting ready to run down the Grand with a stor… 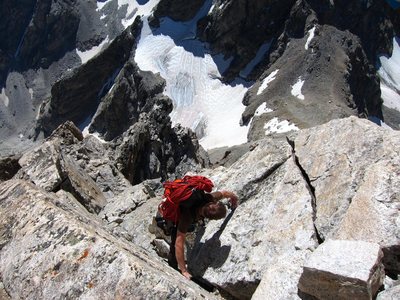 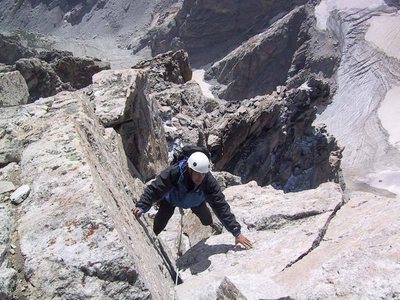 The "V" pitch, high on the Grand Teton. 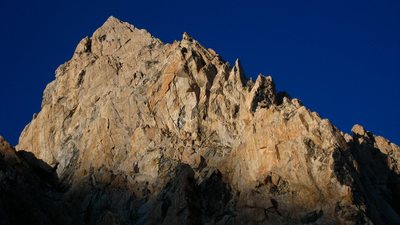 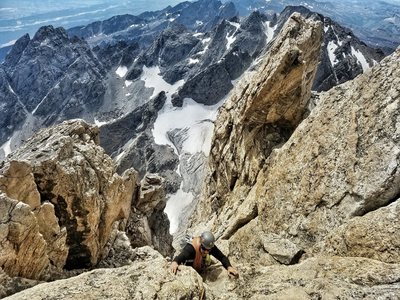 At the top of the wind tunnel pitches 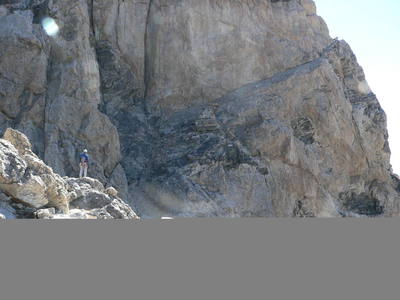 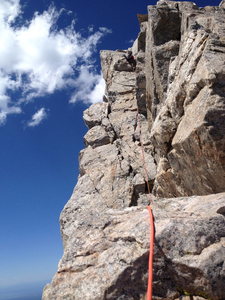 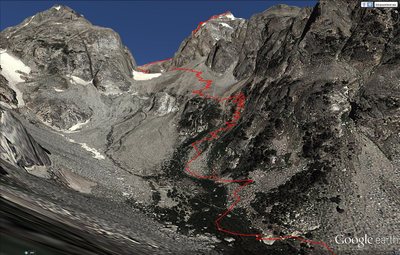 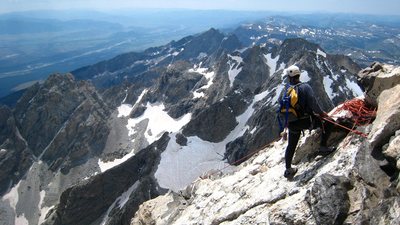 Belay atop the Friction Pitch