The north face of the Grand Teton is one of the most compelling alpine climbing objectives in the US, second in my estimation only to the Diamond of Longs Peak. The view of it from the top of Teewinot elicits an "I must climb that reaction". The historical importance of this face which Ortenburger calls the "most famous" in the US" and surrounding lore only add to the appeal. While the moderate nature of the climbing and generally high quality of the rock belie the Eiger like implications of the north face designation, the approach to the face is arduous and/or hairy enough to impart the undertaking some suitable gravitas.

The route described here is a link up of some or all of the North Ridge, the Italian Cracks and the Direct Finish of the North Face route; according to the cognoscenti, this combines most if not all of the best pitches on the face in a single outing.

This description starts at the top of the Grandstand, after the actual business of the climb. There are a few options for getting to this point, all problematic.

Note on season: this face holds snow and ice well into the summer. Parties doing it before August will probably encounter enough snow or ice to warrant at least one ice axe. In other words, the season for this climb is August. On the plus side, the face actually faces north easterly and thus gets sun until around 1100 in mid August. Probably a good idea to check with the Jenny Lake climbing rangers about conditions before heading out.

1. Valhalla Traverse. If your objective is just to do a north side route, this is the standard approach. It primary advantage is that it starts at Lower Saddle, where any sensible descent from the Peak concludes and thus makes for the shortest day. The primary disadvantage is that the VT, which I haven't done, is by all accounts a three hour (at least) spirit sapper of snow, loose rock and dirt traversing with tricky route finding -- some parties spend all day on the traverse, unable to even find their intended route -- about which I've never heard anyone say anything positive.
2. Up the Grandstand from Teton Glacier. I don't know much about this approach, but even before global warming, it was often a rock fall horror show.
3. Via Mt Owen. Many sub options here, but compared to Valhalla and Teton Glacier, all the obvious ones -- traverse from Teewinot, Koven Route, East Ridge, Serendipity Arete -- will be much more enjoyable. The catch here is that via even the quickest of these (probably Teewinot), a very fast party making no mistakes should budget at least eight hours to reach the top of the Grandstand.
We approached from Owen. Some observations on our experience follow. From the top of Owen there is considerable potential to screw up just getting to the Gunsight, the low point of the ridge that runs south from Owen to the Grandstand. The general idea is to descend fairly easily from the base of the Koven chimney, staying on the east side of the Owen-Grand ridge until a pinnacle is reached. At this point, cross over to the west side of the ridge, down climb to the west on slabs at the top of a gully that leads all the way down to Valhalla Canyon until you can cut back south on easy ledges. Follow those ledges to the top of the north end of the Gunsight, then make three half rope raps (or downclimb, alleged 5.6) into the gunsight. Making no mistakes, it took us at least an hour to get from the summit of Owen to the bottom of the Gunsight.

Getting from the Gunsight up onto the Grandstand is also not trivial. Options include:
a. downclimbing to the east (possible snow/ice) and contouring around the bottom of the Grandstand (south) then following 300-400' of third class to the top of the GS
b. Traversing west until a "dangerously loose" 4th class gully is reached.
c. Doing a couple of roped pitches more or less straight up until 3rd class terrain is reached. Again there are many sub choices here; we followed a right trending ramp system which provided one long pitch which was more taxing than we wanted it to be and one shorter, easier pitch.

In total, it took us somewhere around three hours to get from the summit of Owen to the west end of the Grandstand.

OK, you've finally made it, one way or the other, to the base of the North Face. The following pitch ratings are taken from Rossiter and Ortenburger; pitch lengths are from our experience. Climbing w/ a pack containing full room and board, everything seemed harder to me.
P1: Up easily for about 40' to a large block. Behind the block, traverse left and up, eventually reaching the base of an easy gully. 5.6, ~50M.
P2. Up the gully until a talus covered terrace is reached, just before the angle steepens and the climbing becomes more difficult. 4th class, ~50M. (Note: Rossiter said to go up this gully for two pitches; for us it was about 150'.)
P3. Traverse left on the rubble (possible snow/ice) then down and left again. Belay at the base of a 20' fist/OW crack. 30M, 4th class.

The previous three pitches were mostly on the North Ridge route. The next two are the Italian Cracks.

P4. Up the wide crack (5.6), then traverse left (4th class) for about 8M to a right slanting chimney/gully; more aesthetic but less expeditious, cut the traverse short and climb a 5.8 finger crack which cuts off the dogleg. Which ever option you took to get in the chimney, continue up an obvious crack line which gets steeper and more difficult. Stretch the rope out to a comfortable belay in the 2nd alcove. 5.7 or 5.8, 60M. I thought this was the best pitch of the climb.
P5. Continue up on face and intermittent cracks and belay at the Second Ledge. 5.7, 55M.

At this point you can traverse right and join the North Ridge. The following description is of the recommended North Face finish.

P6. Climb a black "chimney" to another ledge. Belay about 8M right of a wide crack with rap slings about 10M up it, at the base of the right of two right facing corners. Steep 5.7, ~30M

P7. The famous Pendulum Pitch. Up the right corner, passing fixed pins (5.7) for about 15M. Traverse left on a narrowing ledge. Hand traverse past more FPs onto a seemingly blank face (old school 5.8). Belay in alcove at the left end of the 4th ledge. A classic, memorable pitch. Spend a moment envisioning the first ascent over 50 years ago. 5.8, ~25M.
P8. "Scramble" up the 4th ledge (right/west) for about a 30M, until just past an relatively easy looking, short, right facing corner. ~30M.
P9. Up the corner, then angle up and left on easy, unprotected slabs until a 5M long, right leaning crack with much fixed gear is reached. Up the crack until it makes sense to cut left onto another slab which provides 5M of harrowing 5.7 slabbing "sting in the tail". After placing a piece to protect the 2nd, belay on a talus covered ledge. 5.7, ~20M. This pitch could be problematic if wet.

From here the summit is about 100M above you. It you beeline for the top, you will probably have to rope up again. If you judiciously angle right, it should be 3rd class all the way to the top. 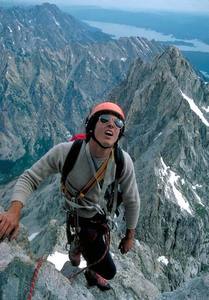 Joe Terravecchia on the Italian Cracks in 1985.… 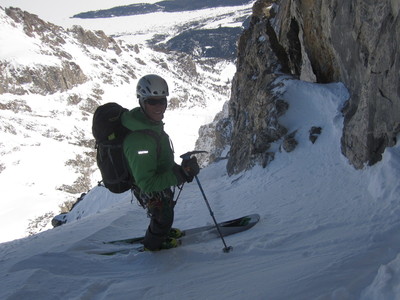 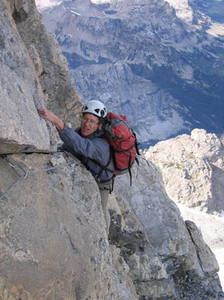 At the crux of the Pendulum Pitch. 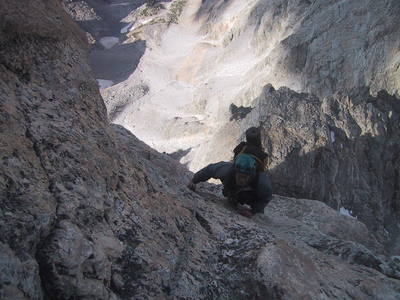 Dougald finishing off the 5.7 slab on the last… 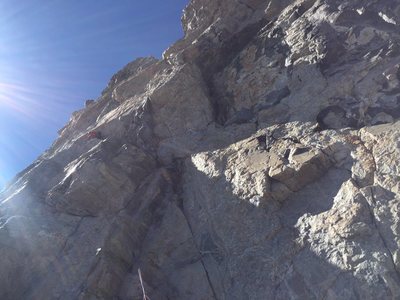 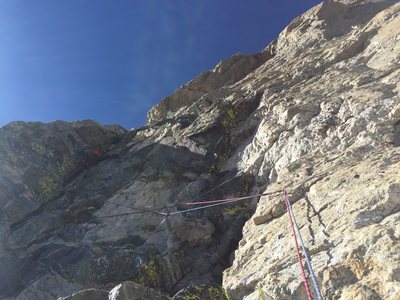 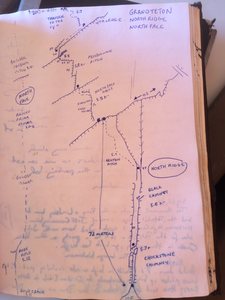 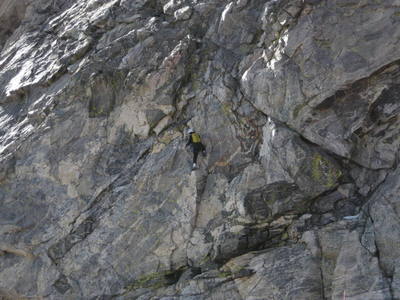 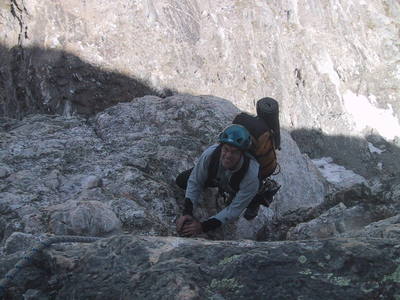 Dougald MacDonald at the end of the first Itali… 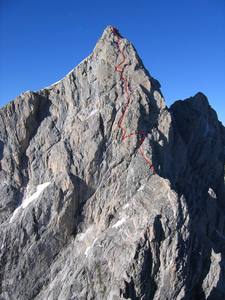 The north face from Mt Owen