This is either a moderate snow climb with WI2-3, a waterfall rock climb at 5.7, or something mixed in between. We did it with snow and ice and expect most people to, so only that variation is described.

From just West of Glencoe Col, ascend the obvious narrow couloir. An early crux is encountered at the narrowest part of the couloir near the bottom, which often holds ice for about 10-20 ft. There is a rappel anchor at the top. This section has the most hazard as it is subject to avalanches from the Ford Couloir, which collects more fresh snow and gets early sunlight in late Spring. If caught, you will be swept off cliffs below.

After this, the couloir broadens as the Ford-Chevy system enters from the left. This is an alternative variation to the summit described on the Ford - Stettner Couloir (Ski Descent) page. Continue up and right to complete the Stettner Couloir. The ice crux is still ahead!

Soon you reach the chockstone crux. Snowmelt often flows over this and forms water ice to climb. Apparently Steve Shea and David Breashears encountered WI4+ here in 1978, but we only encountered WI2. Thinking of how it can fill in, I cannot see how it would get harder than WI3. Anyways the crux is about 30' long. When I climbed it in June, it had a 6' lower step, a short snow ramp, and a 10-15' vertical exit wall. The ice at that time was too bad to take screws, but I was able to place a 0.2 C4 up and left of the first step before starting, and a 0.4 C4 up and right at the snow ramp while simul-climbing this section. There is a fixed rappel anchor above this section.

Above the crux is more snow climbing that might steepen with a bit more easy ice before encountering the narrow saddle between Underhill Ridge and the Grand Teton summit snowfield. From here, turn left, climb through some cl. 3 slabs mixed with snow, and pick the best line up the summit snowfield to the summit. We encountered some occasional WI1 that formed over shallow snowpack above rock slabs, so keep your tools out and crampons on here.

One way to finish is to skirt the right edge of the Ford Couloir until you reach a rock wall. From here turn right and work your way up weaknesses to the summit. In early season this is all a snow climb.

To descend, either ski the Ford Couloir and do some rappels, or descend the Owen-Spalding. Keep in mind the conditions and time of day as the Ford becomes dangerous later in the day. We heard it avalanche a large a wet slide beneath us as we walked the last few hundred feet to the summit around Noon. You could also ski the Stettner, which is probably easier at the top.

This is the couloir between Petzoldt Ridge and Underhill Ridge. It is reached by either East or West approaches on the Black Dike Traverse. The most common approach is via the Teepe Glacier-Teepe Col-Glencoe Col from the East. If approaching from the Lower Saddle (the West), traverse the Black Dike until the last couloir before Glencoe Col, which is the high point on the traverse.

As a snow/ice route: A couple of screws, or a couple of small cams. As a rock route: ? 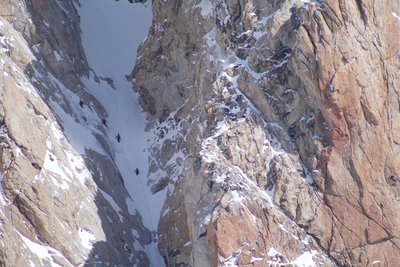 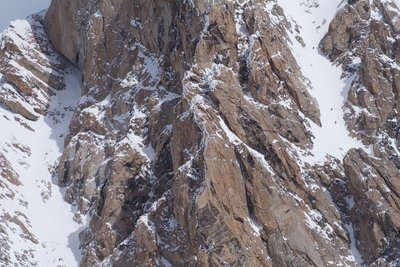 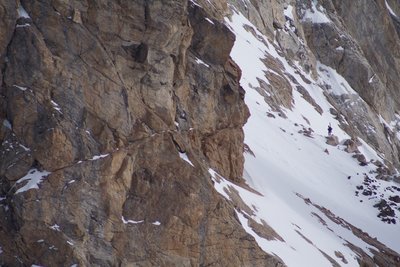 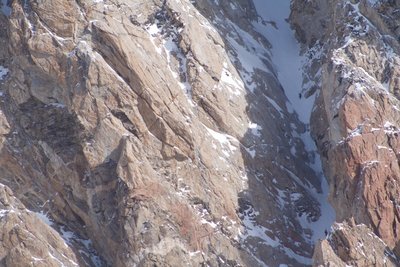 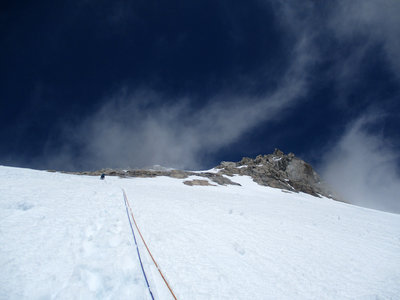 John leading up the endless soft snow of the su… 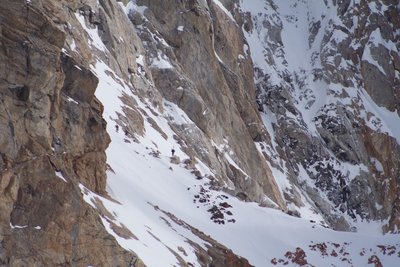 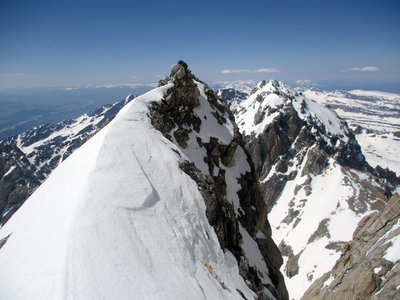 Looking towards Underhill Ridge from atop the S… 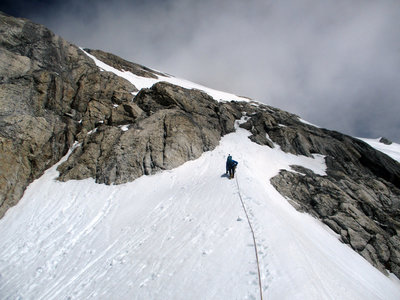 John leading out of the col over the cl. 3 slab… 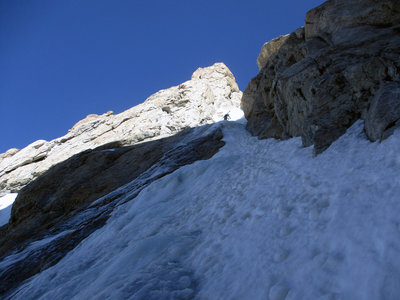 Skiers rappelling out of the Chevy Couloir. You… 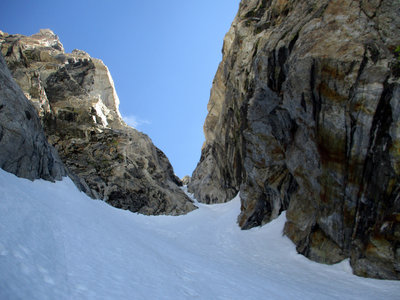 The rest of the Stettner Couloir seen from the… 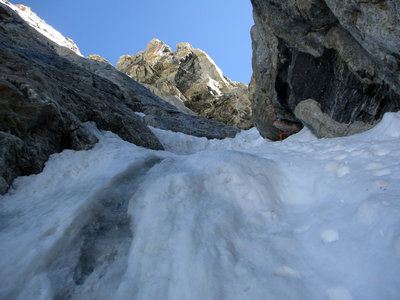 Nearing the top of the first ice crux and rappe… 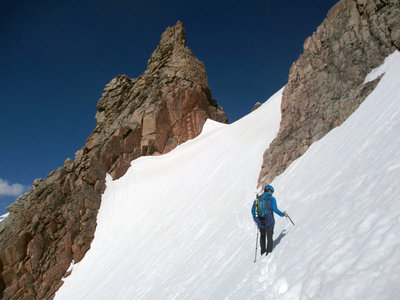 John on the Black Dike Traverse heading from Te…