A truly inspiring climb with classic appeal - the North Ridge is an adventurous route up the striking high angle corner that makes up the right hand skyline of the Grand when seen from Jackson Hole. At the time of its first ascent in 1931, Underhill and Fryxell's route was one of the most technically demanding in the country at 5.7 A0. The Chockstone Chimney (originally aided) went free on the second ascent of the route in 1936, which was made by Fritz Weissner (at 5.8).

The North Ridge of the Grand is one Steck and Roper's 50 Classic Climbs of North America, and justifiably so. An intricate approach leads to quality, varied climbing at a moderate grade in a beautiful setting. The route takes you up an obvious path to the most spectacular summit in Wyoming.

The route described here is the original North Ridge as climbed in 1931. Many variations are possible. The famous chimney pitches of the original route are commonly icy, except during prolonged periods of high pressure in the summer. If the chimneys are icy (or just because the climbing is good), another popular option is the Italian Cracks. Also, the technical climbing of the route can be extended by finishing on the Direct North Face. Both these variations to the North Ridge are further explained here.

Once you get started, the climb is pretty easy to follow - take the path of least resistance up the ridge. That said, a few landmarks are worth nothing:
On the first pitch, climb easy rock to a flake, and squirm behind the flake (climbing to the left) to steeper rock for a few moves (5.7), followed by more gently angled rock. Take the gully to the base of the Chockstone Chimney. Follow pitons on the right wall to the stemming crux, 5.8. Next is the Black Rock Chimney, 5.7. After exiting the chimney system, climb the beautiful orange Slab Pitch. Go right along the Second Ledge to a left-facing corner with good, solid, golden Teton rock. Follow this for 2 or 3 more pitches to the top. Expect much 5.7 climbing on this route.

Approach
Take one of 4 approaches to the top of the Grandstand and the base of the North Ridge:
1. Valhalla Traverse - the standard (i.e. easiest in good conditions) route to the top of the Grandstand starts from the Lower Saddle. This is probably the quickest way to the base of the route. This approach also allows for a convenient camp at the Lower Saddle, which lies directly on the descent route.
2. Teton Glacier - the choice of the first ascentionists still provides a great mountaineering objective for Wyoming climbers. This option adds a bit more route-finding, some glacier travel, and has the aesthetic value of making a bigger loop (i.e. you cover more ground in the mountains). You'll need crampons and/or ice axe for this approach.
3. From Mt. Owen via the Gunsight Notch - mainly for those doing this route as part of the Grand or Cathedral Traverses. This involves very tricky route-finding, some strange rappels, a 5.7 chimney pitch, and more time than you probably budgeted (in my experience). Do some research and/or scouting of this portion (sorry, it's been a few years since I've done it).
4. Cascade Canyon to Valhalla Canyon - this scenic path to the route involves the most hiking. From the Cascade Canyon Trail, cross Cascade Creek (not trivial) into Valhalla Canyon. Scramble up the west face of the Grandstand.

Descent is via the standard Owen-Spalding route. It's convenient to know this route before climbing the North Ridge. 1 or 2 rappels with a single 60m rope will take you down to the Lower Saddle with a bit of scrambling and some good route-finding ability.

There are lots of options for bivies on this route, depending on your approach. Some of the more likely spots might be: the Lower Saddle, in the moraine beneath the Teton Glacier, near the top of the Grandstand, or high in Valhalla Canyon. Or, do it in a day from the car.

Bring your standard 5.8 alpine climbing rack. I think most folks would be comfortable with a set of medium to large stoppers and a set of cams to about hand-size. The crux climbing is actually pretty well protected by pitons, so bring some draws/runners. A single 60m rope is sufficient if things go well.

For more information, check out A Climber's Guide to the Teton Range by Leigh Ortenburger and Renny Jackson and take a look at the Grand Teton, WY USGS quadrangle. 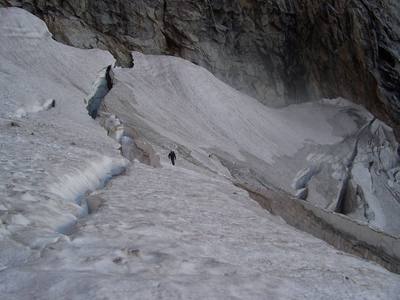 Hiking up the Teton Glacier on the approach to… 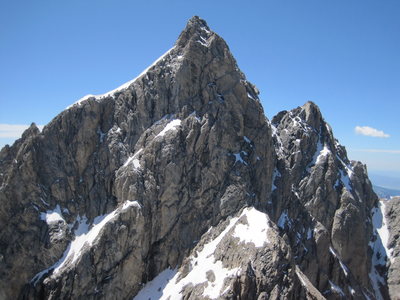 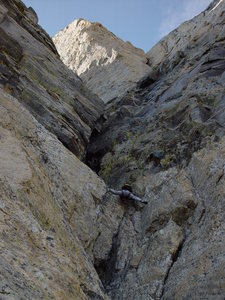 Louis Arevalo stemming his way up to the Chocks… 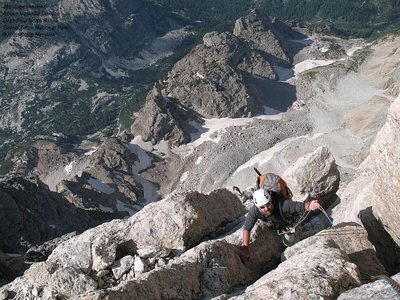 Somewhere above Second Ledge. To my surprise… 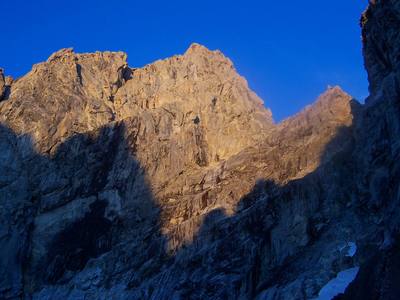 Morning sun on the Grand Teton's north side. T… 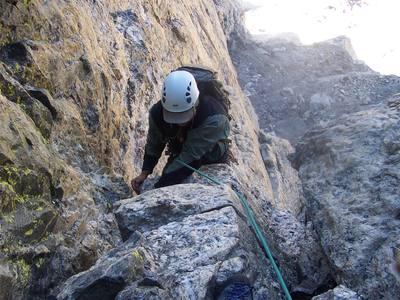 On the last few moves of the Chockstone Chimney… 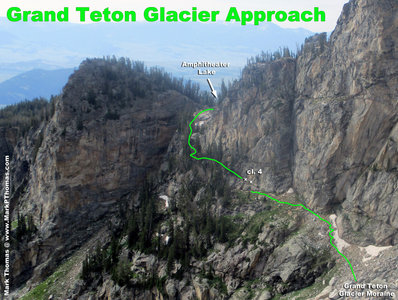 Approach linking up the trail to Amphitheater L… 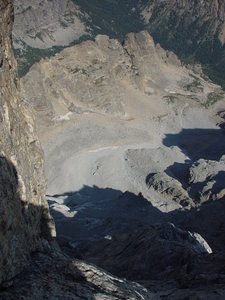 Looking at the Valhalla approach from the North… 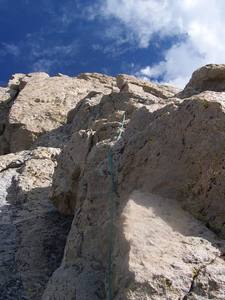 Looking up at the last few pitches of the North…