This is the cliff directly above the Winkie Dinkie Cliff. It has some high quality routes with very little traffic. It is fairly shaded.

There are at least five ways to access Mid Wall.

1) Take the Seamstress route after hiking up to K-Cliff (see images linked to route).

2) Hike up all the way from K-Cliff using fixed lines as described below:

Traverse right along the base of K-Cliff and follow the trail up the gully past the Lip. Traverse along the faint trail above the Black Wall to the base of Winkie Dinkie. Pass Gorilla my Dreams and walk towards the top of Breakfast of Champions, keeping an eye out for a gully on the left. Go up the gully on a fixed line, then a 50' via ferrata that eventually passes through the tunnel. Now you are on top of Julie's Roof. Follow a second fixed line and a goat trail to a blocky narrow passage. (If you take this third fixed line down you'll access all of the top of the Lower Wall.) If you go up the fixed line, you'll be at the Middle Wall.

Update: June 2014: There appears to be no fixed lines on this route now.
Update Aug 2020: There are 2-3 fixed lines and a short via ferrata

3) Via Winkie Dinkie cliff. Climb something at the Great Northern Slab, Princely Ambitions, or hike in from the trail between K-Cliff and the Lip, and then climb Gorilla My Dreams (or the above fixed lines) to get up there.

4) Do a route that either tops out on the Narrow-Arrow end of the Lower Wall, or the wall left of Orc Tower.

5) Hike the trail that goes to the Upper Town Wall (from the Country), taking the first turnout left. Where the Blues Cliff trail forks off left, stay right and continue across the top of the Lower Wall. This is a fun hike, but be careful about the dilapidated stairs. Also use caution on the exposed wooden bridge. 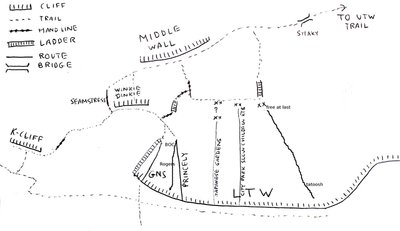 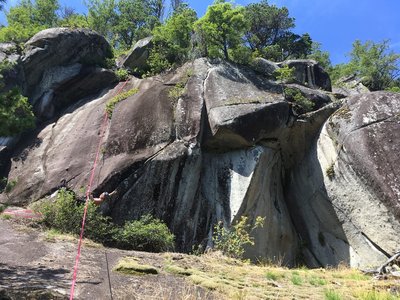 Blue Tile Lounge in its entirety. The rope is o… 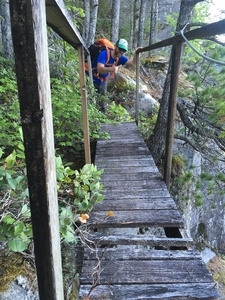 The rickety bridge on the approach from the cou… 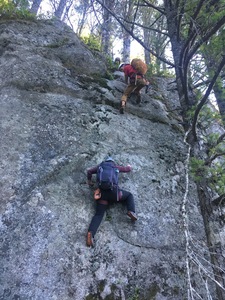 The via ferrata approach to the mid wall, you m…

All Photos Within Mid Wall