Areas in The Needles

Open fires at the Needles (and campground) are strictly probibited without a permit.

The Needles Area is CLOSED for 2021. See access note above.

Breathtaking and shrouded in mystery, the Needles are a series of enormous granite spires that stand watch atop a narrow ridge that sits high over the Kern River in Sequoia National Forest. This is a climber's paradise: perfect rock, beautiful scenery, minimal crowds, and adventure in abudance.

The area was originally explored in the early 70's by Fred Beckey and a handful of other Californian climbers, and in the late 70's more and more new routes, including many of the classics, were put up by climbers like Herb Laeger, E. C. Joe, and Dick Leversee. During this time then youngsters Randy Leavitt and Tony Yaniro got wind of the area and in a matter of months some of the hardest and most beautiful lines in the Needles were established. New route development continued into the 80's with these two and their partners, as well as guys like Mike Lechlinski and Tom Gilje. Even today new routes are going up, as well as the updating of aging hardware by Greg Barnes and the ASCA.

The current guide book as of 2016 is "The Needles Climbing, A Complete Guide" by Kristian Solem, available online from K. Daniels Publishing. An older guide to the area, "Southern Sierra Rock Climbing: The Needles Area," by Moser, Vernon, and Paul, has been out of print for some time now and is a hard to find item. Some details exist in various climbing magazines, as well as online resources such as this site, Clint Cumming's personal website, the Needles Mini Guide (google it), and on the Summit Post. You can also find beta specific to the Romantic Warrior and Scirocco in "Fifty Favorite Climbs."

Perhaps the lack of published information has kept the crowds at bay, but more likely it is the hour long approach hike from the trailhead and the steep and intimidating nature of the climbing. Either way, the Needles has a mystique and ambiance that is unlike any other area in the country, and that feel is augmented by the names of the features and routes themselves: The Magician, the Sorcerer, the Witch, the Warlock...

The Magician is the first and largest of the Needles, and when it first comes into view after hiking along the ridgeline it inspires awe. Perched at its top is a historic and beautiful USFS fire lookout tower that is usually staffed through the summer months by the aimiable Marge, who is known for baking cookies for climbers every Sunday morning (note that in an tragic, yet ironic, twist the lookout burned down and is no longer staffed). The central "cirque" of the Needles is the area situated between the Witch and the Sorcerer, and many of the most classic climbs are located here. The crowning tower of the ridge, however, is the Warlock. It is here that the big routes -- the Romantic Warrior and the Sea of Tranquility lie. There are many other smaller formations such as the Wizard, Djin, the Necromancer, and the Charlatan. Separate rock formations such as Dome Rock, the Hermit, and Voodoo Dome lie nearby and can provide a change of pace if needed.

The ideal climbing season at the Needles is May through November, but it can be very hot in the summer months. Early season FS-21S05 is closed due to snow. Call the Ranger Station at Kernville (760-376-3781) or Porterville (559-784-1500) for current conditions.

Campsites (Needles Spring area) exist a few hundred yards before the trailhead which is at the end of FS-21S05, a three mile dirt road. From camp it is a quick 3 mile hike along a beautiful ridge to the Needles themselves. Primitive camping can be had amongst the formations (you must obtain a fire permit from the Ranger Station), but it is more common to simply stash gear and hike back out to the main camp. There are also excellent, scenic (and more private) campsites located along FS-21S05.

Supplies, water, and even cooked meals can be had at the Ponderosa Lodge (559-542-2579), located by the Quaking Aspen Campground, 1/2 mile N of FS-21S05. Please don't dump your garbage in their dumpsters. There are pay sites at Quaking Aspen with pit toilets and water available.

Directions to the Needles proper:

From Bakersfield, CA (and points S, SE, E): Head NE on 178 (Kern River Road) towards Wolford Heights/Kernville/Lake Isabella. Continue N on 155 around the W side of the lake. This eventually turns into M-99 (Kern River Highway); follow this N through Fairview, then W through Johnsondale where it turns into M-50. After a few miles, turn N on CR-107 (Western Divide Highway). From this turn head 15 miles to NF-21S05. Turn E and follow this unpaved road 3 miles to the campsites/trailhead. A quick, scenic 3 mile hike along the ridge takes you into the formations.

From Ducor, CA (all points S (possibly including Bakersfield), SW, W, NW, N): Head E on J-22 (Avenue 56/Sierra Avenue) past Fountain Springs and past the intersection with M-109. Continue past California Hot Springs; the road changes to Hot Springs Drive and then to M-50. After a few miles, turn N on CR-107 (Western Divide Highway). From this turn head 15 miles to NF-21S05. Turn E and follow this unpaved road 3 miles to the campsites/trailhead. A quick, scenic 3 mile hike along the ridge takes you into the formations.

From Portersville, CA (all points N, NW -- probably slower than the Ducor directions but a great drive): Head E on 190 past Lake Success and then past Camp Nelson. Continue past the Quaking Aspen Campground for 0.5 miles to NF-21S05. Turn E and follow this unpaved road 3 miles to the campsites/trailhead. A quick, scenic 3 mile hike along the ridge takes you into the formations.

From Ridgecrest, CA (all points E, SE, NE): Head W on 178 towards Wolford Heights/Kernville/Lake Isabella. Before reaching Lake Isabella, turn N on Sierra Way and head NW along the E side of the lake. This eventually merges into M-99 (Kern River Highway); follow this N through Fairview, then W through Johnsondale where it turns into M-50. After a few miles, turn N on CR-107 (Western Divide Highway). From this turn head 15 miles to NF-21S05. Turn E and follow this unpaved road 3 miles to the campsites/trailhead. A quick, scenic 3 mile hike along the ridge takes you into the formations.

Voodoo Dome and Dome Rock are two popular formations that are in close proximity to the Needles proper. Dome Rock has an entirely separate approach, trailhead, and camping, as does Voodoo Dome (while Voodoo Dome can be approached via a descent down past the Warlock, it is more expedient to use a different approach (the lower Needles approach). This approach may also be a good way to reach routes that begin on the lower flank of the Warlock.)

Classic Climbing Routes at The Needles

Mountain Project's determination of the classic, most popular, highest rated climbing routes in this area.
More Classic Climbs in The Needles » 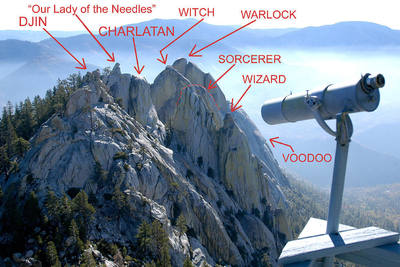 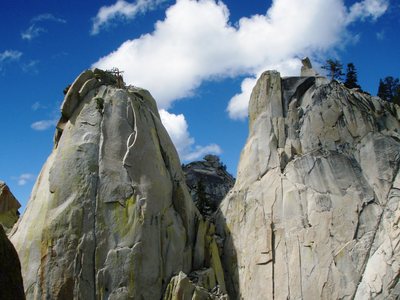 East faces of the Sorcerer and Charlatan Needles 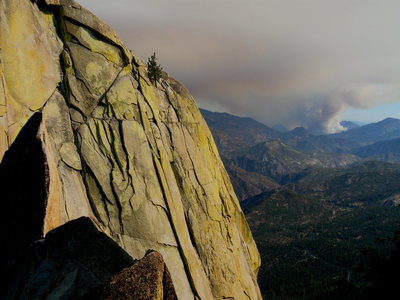 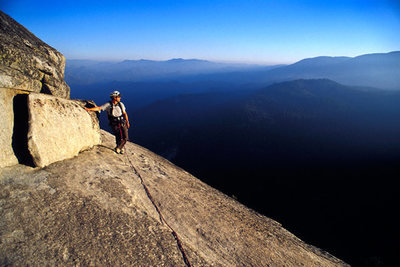 Matt Grieger nears the summit of the Magician N… 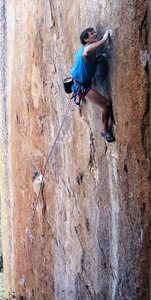 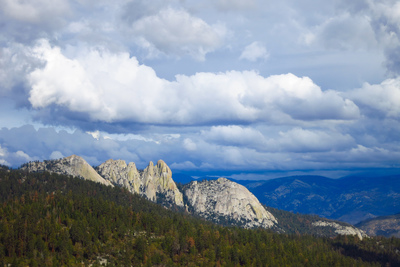 The Needles from Dome Rock 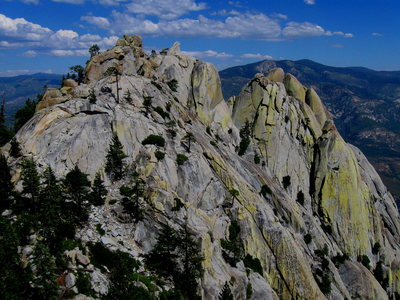 The Dijin, Charlatan, Sorcerer, Wizard, and...… 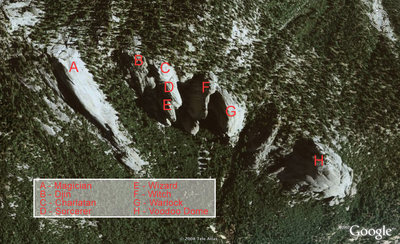 Overview of the Needles 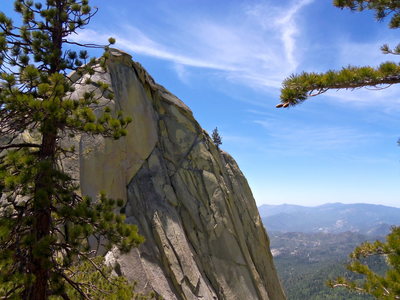 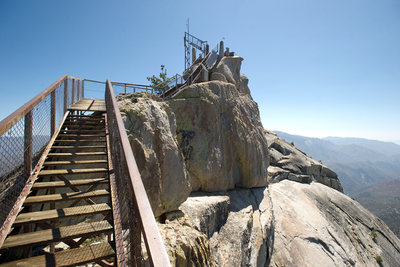 Currently, the stairs up to the fire lookout en…

The Needles from Dome Rock

All Photos Within The Needles


More About The Needles

The Needles Climbing, A Complete Guide (2017)
Kristian Solem (2017)
From the seller's website: "This guidebook covers every route from the classics to the obscure at…
About·Free Stickers·Widgets·Help