The Diagonal Will aka DW (not to be confused with the PW though the rocks speak the same language) is a route most people would choose to not repeat. I know I have no desire to return. For me, twice was enough, more than. It's not that the climbing is bad. In fact, much of the route involves exceptional movement. It's not that it isn't a scenic route. Au contraire the views from there are not to spare. It is most likely that the two most common things you and your partner will be saying are "ROCK!" and "on belay... DON'T FALL!". This is really Not a climb for the faint-hearted who lust after safe rock and solid anchors. No no this IS a route for PIRATES! On both of my excursions, I can recall levels of terror and serenity that are unparalleled in my Black Canyon experiences.

After turning the roof, the climbers are confronted with a profound decision. Everything is attempting to force you up and to the left but you have to find a passage to the right. The climbing up the Swallow Wall to the left looks intriguing at first. But all to soon, the immense dihedral rolls over into the gnarliest set of overhanging raptor beaks and talons. To the right involves managing a breach in the overhanging right wall of the DW dihedral. The pitch ends at a stance amongst a jumble of sharp edged loosely stacked flakes and blocks in the most exposed place imaginable. Considering that the next pitch involved a tricky traverse up and right for 90' of unprotected pegmatite face and a to the knot full rope length of climbing all on a "DON'T FALL!" belay, it is no wonder that my hands are sweating just writing about it almost thirty years later. That belay in space was the single most frightening place I have ever been in the Black.

Fortunately, after the peg traverse, the route kicks back into just hard for the last 5 or 6 pitches of obvious route finding. As to information about the rock fall from the cruxy pitch below the long roof, all I can say is "tell me something I don't know." Both times I was there, that portion of the route looked like a huge dirty snow cone just crammed there by some spoiled rotten giant brat. And each time I was there it looked very different. It was highly changeable stone! And it was always desperately unprotected there as well. So, what change has occurred? Probably more of the same!

The DW is the steamy underside of Black Canyon misadventures. If asked if I would ever go back for the three-Pete, I would have to answer that depends. On what you might ask? On whether I could haul enough Depends with me.

Diagonal Will is the most obvious feature on the entire buttress. Follow the long right facing, left leaning dihedral system. Continue through the far left side of the big long roof where it becomes a left facing overhanging dihedral system. Whereupon you must Will your self rightward to get to a different left facing system and the top. Easy! Except you should note that DW starts atop the largest single collection of talus at the base of any wall in the Black.

Take whatever you can carry in addition to a full Black Canyon trad/free rack. NO bolts or pins were ever used on the DW in the old days. 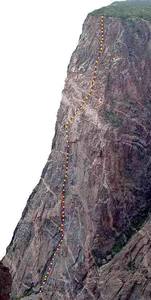 More About Diagonal Will