Lauren's Arete is the ridge/arete forming the west side of SOB Gully. The climb feels more like some old-time mountaineering classic in the Tetons than a modern rock climb. It is very satisfying.

To get to the start, hike down SOB Gully until not too far from the river, then skirt around west around the toe of the arete/buttress. Ascend a little till at the base of an easy chimney/gully heading upwards and right (east) to the arete proper. Scramble up this and belay on the crest under a face.

Climb up and right past bushes to gain better rock, cracks, a fixed pin (if you are lucky), and a nice stance. From here, scramble thirty feet down to an obvious notch. Climb up a steep flake crack slightly to your left. This rapidly gets easier, though is an excellent 5.8 crack for a long ways. This gains some airy ledges. Here forge boldly upwards (5.9) up the steep prow above. I found some 5.10 moves hereabouts, but I may have been slightly off-route, or maybe not.... The rock drops very steeply on both sides, making the climbing exposed, and retreat very tricky. Continue directly up the arete for two more pitches, until the angle eases off. After gaining a larger notch, there is another steep and fun 5.8+ pitch up some pegmatite, which gains easier ground and a large ledge system. Here the "descent" continues slightly upwards along a narrow, loose, and dangerous ledge to the upper reaches of the SOB Gully. Though nominally third class, this is hairy, and if the hour is late or the party is tired or inexperienced, it may be safer to rap from trees to join SOB Gully lower down (likely two raps from here with double ropes).

When we climbed this, we had a blast, and finished in maybe four or five hours, but we passed a party on the second pitch. They had started much earlier than us and ended up getting back to their car long after dark. It would be real easy to have a hideous epic on this long and hard-to-escape route.

A general rack up to maybe 3 inches. Maybe a few extra long slings. 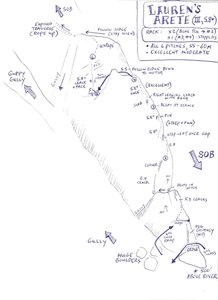 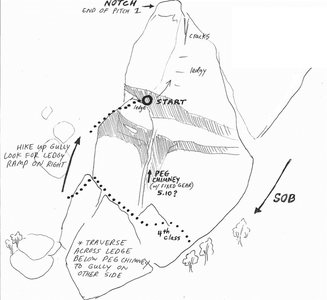 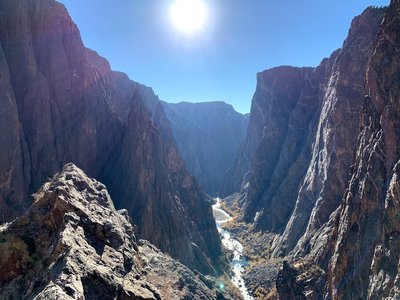 Looking back at the traverse ("pitch" 5, really… 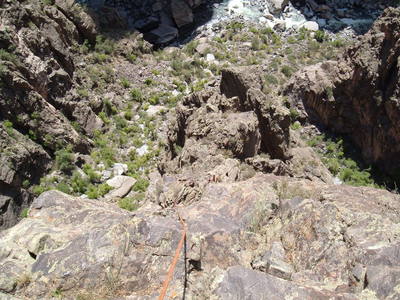 This is the really view from the belay. At this… 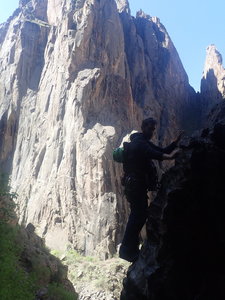 Nat Kasper on the approach. 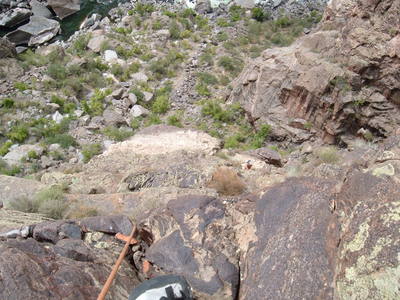 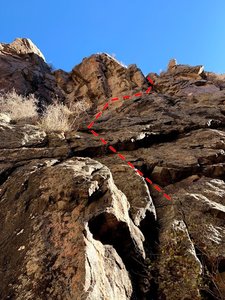 Looking up at P2 from the Notch. I went out to… 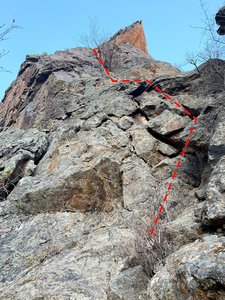 Pitch 6, the last real climbing of the route. B… 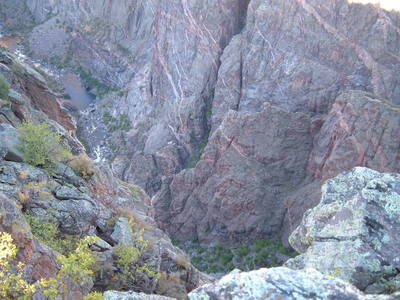 This veiw was taken from atop a tower in the De… 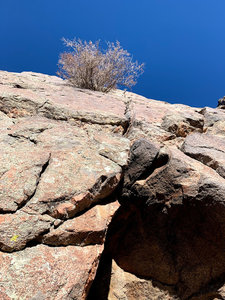 Looking up at P4, the best pitch on the route.… 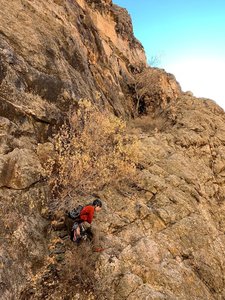 This is the scramble to the 1st belay ledge and… 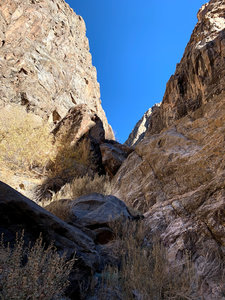 When you're in the gully before the start, you'…