This rad adventure route climbs mostly clean rock on the left prow of Diagonal Will buttress.

P1-3. The route follows cracks (10) for 2 pitches, through an arching roof, and into a large, left-facing peg corner (10+) for an 80m pitch (or pitch it out). At this point, it had rained, so we had early lunch on top of the pillar waiting for the rock to dry.

P4. Follow a short handcrack up into some precarious flakes, and place gear under a roof. Bust left out the side of the roof (10-), continue briefly left, then climb up and right to a rail on the bottom of the peg traverse. Now climb up and hard right on mostly good edges, getting a tiny cam or two along the way. Traverse to a sloping stance with hand-sized gear (10- R).

P5. Climb up a smooth, featured, left-facing corner on varnished reddish-brown rock. Get a #4 in out left, then pull over a small roof into the corner up higher (11 PG-13). Arrange small brass trinkets and make a big move to a juggy rail (10+ R). Traverse right to the arete (9) and place gear on the left side in a crack. Move up slightly and then traverse directly right for 25-30 feet (10+ R) with no more gear until the next left-facing corner. Run it out up the corner (10-) to protect the follower. Build a belay at the top of the corner.

P6. Climb up a discontinuous, somewhat poopy, finger crack (11) with great rock and good stances. When the crack ends, traverse left on positive holds (9 R). Climb up another corner (10ish) and arrange gear (include finger size and C4 #4). From here, the FA claims the route traverses low and right on edges (11 R) and then up towards a hanging flake and a slopey mantel onto a ledge. This way takes some small offset cams but appeared to blank out below the flake. I downclimbed over to another variation, but perhaps this way goes.

Direct Variation:
Rather than moving out right on the face, continue up the crack as it peters out to a seam, liebacking the right edge of a bottoming crack on perfect rock, looking for a good face hold up high (11 R). A 0.75 C4 or red Metolius cam can be arranged in a shallow but bomber placement slightly out right in a parallel feature. Run it out 20-25 feet above this to a precarious mantel (12- PG-13/R) onto a very sloping rail below a small peg band, clipping an ancient bolt (really a bent masonry nail). A slopey undercling hold and a high foot smear make this move possible. Make a very delicate traverse directly right across the sloping rail (11 R), finishing on a slab below a roof. Pull the roof (10+) on hands, cups, and fists, and either belay at a good stance (good gear) or continue up a beautiful varnished corner on rattly fingers (11) to small stance with smaller gear.

This exciting variation seems to be of higher quality than some potentially flaky rock at the top of Jonathan's variation. We watched another climber go this way as well. If this becomes the standard variation, someone should definitely put a good bolt here! Blowing the mantel and ripping the cam below could be devastating.

P7. This was the most dangerous pitch in terms of likelihood to fall and get hurt. Climb the varnished (11) corner (or if belaying above it), continue up discontinuous crack and face, angling slightly left. Now climb run-out face, arranging gear where possible, and climb delicate and friable edges (11 R/X) way above gear. After the most difficult moves, slot in some shaky brass nuts and marginal cams, and make easier moves to better gear. Jay led this pitch, and we both thought it was pretty dangerous. I pulled off a right handhold following the crux but managed not to pop off. Be very careful! We continued up and right to halfway up a chimney on the left side of a pillar, but you can belay earlier.

P8. The space face. Climb a chimney (9), and arrange gear before the top of the pillar (0.75 and #3 C4 were helpful). The FA claims a 000 C3 can be placed off the pillar, but this placement didn't look worthwhile. Climb up a good, unprotected peg band up and left (10+ X), following the path of least resistance. The FA claims to have gone further left, but I climbed slightly right and up, eventually getting gear after 60-70 feet (tiny cams including 000 C3). Meander up and left on schist and peg, placing gear where possible. (10 R) Build a belay at the first good crack worth putting gear into.

P9. Climb up a peg band into a funky corner system (10ish) traversing left as soon as possible to get to better rock. There could be better corners further left. Climb clean cracks (8-9ish) up into clean, featured handcracks (7-8ish), continuing up near the prow until you run out of rope.

P10. Simul for a couple ropelengths up moderate terrain (9 or easier), reaching a cleft at the top.

Hike out a couple miles on the North Vista Trail to the ranger station, trying not to get suckered onto the loop above the Russian Arete.

Pound Town starts in cracks on a smooth slab climber's left of Diagonal Will on the Diagonal Will Buttress underneath a large peg column. Look for a hemp rope anchor 30 feet up and slightly left. 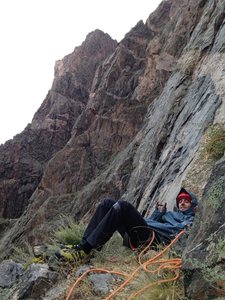