Routes in The Nappy Dugout

I also seen this route referred to as 12d but it was rated 13a when it was put up, and I don't want to be further accused of sandbagging.

Frizzle Frye is probably the only American Fork style link-up at Rifle, yet ironically it follows a natural weakness (pod-type crack) in the rock and not just an arbitrary set of quickdraws. It basically moves diagonally right across most of the Nappy Dugout, starting left of Fringe Dweller, above which it crosses, before traversing right above the crux of Lungfish to join the top half of Drunk Monkey.

There are two distinct cruxes on this route, one a powerful set up on poor pockets, the other a very funky transition move across the faint Lungfish corner. Same some juice for the end, as the top of Drunk Monkey involves fairly sporty 5.11 climbing and some big reaches.

Cleaning this route is a bitch so you're best off finding some poor slob to second you on it.

10 quickdraws and a strong right shoulder. 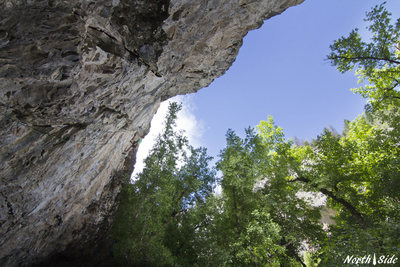 Steeper than it looks.