This entry was submitted separately for P1 and P2. In order to keep the database neat and organized, these two submissions are combined into one. Thanks for your understanding.

One of the early mixed routes that started the modern mixed craze. The first bolt has been moved up a couple of feet to better rock. A stick clip is recommended!! There are two starts, one to the right and one to the left. I feel the left is easier and on better rock. Power up long moves on huge holds until the 5th bolt. Here the climbing gets a little more tecnical and one should take care clipping the 6th bolt(the one after the slight travers right). It sometimes has a long sling on it (not the day my wife pitched and broke her rib) and tames it a bit. Work up and right to a slight rest before clipping the last bolt and pullling onto the ice. A two bolt anchor is found to the right and most people stop here. A second fine pitch leads up from here and need a fair amount of trad gear. It tops out in the trees and one will probably need to leave a sling. I left draws on the last two bolts of the upper pitch so you can lower off if you wish. (Bring bail carabiners in case they have been taken).

P2. Per Brad Grohusky: Starting off P1 of Amphibian, step left and up through crack. Long reaches into good placements. Screws in ice. There are a couple awkward rests. Some gear was pre-placed. Thanks to Stanley, Jack, and Jason for showing the way this season. Inspired to train that much harder!

P2: Per Brad Grohusky: anchor in Willows on right.

Per Brad Grohusky: for both pitches, a 70 meter rope will get you up and down to ground. 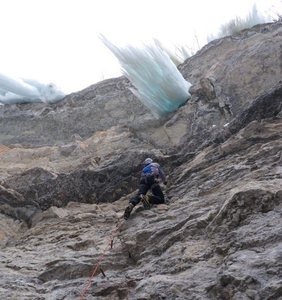 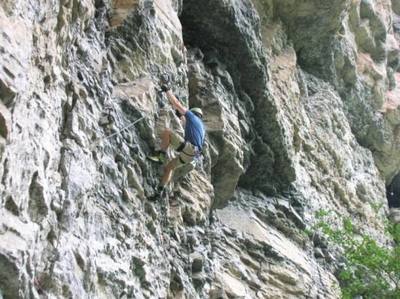 Summer time and the living is easy on Amphibian! 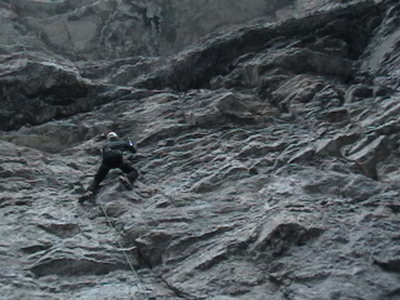 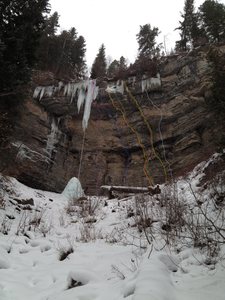 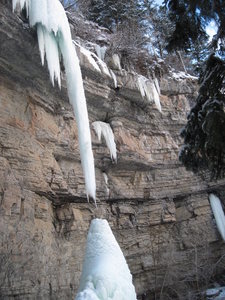 Sam E. showing great poise and style at exit on… 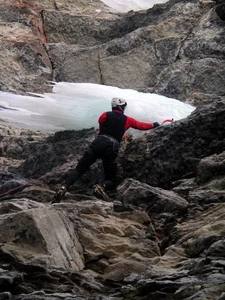 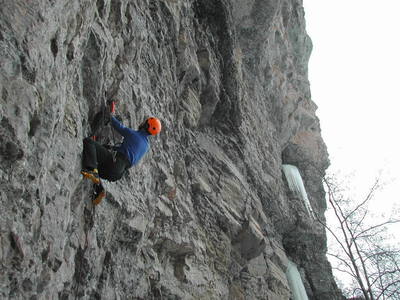