Lower Devils East is the large group of towers visible when looking east across Lower Devils Canyon. For many years there was rumored to be only one route in this area, it was established prior to 1992 and had seen few, if any, subsequent ascents. Late in 2008 Marcy Makarewicz and Geir Hundal started exploring this area, and were pleasantly surprised at the number of quality routes to be found.

The ethic in this area is traditional. Routes are protected with gear as much as possible and bolts have been kept to a minimum.

A small guide to the area can be downloaded here. It has route beta which is current as of 11/2010 and is consolidated down to a 9-page PDF.

Rack:
If youre climbing in LDE, bring your rack. All but two of the routes to date protect primarily or entirely with gear. Doubles of small cams and a full set of stoppers are needed for most of the routes. Check the individual route descriptions for further information.

Belays:
Most of the routes are equipped to be topped out and many of them require that you do.

Descents:
One of the best parts about climbing in LDE is that most of the formations have independent summits. Bolted rappel anchors with quicklinks and carabiners have been installed on most of the summits (see photo). Bring along an extra leaver biner or two to replace these carabiners if they have become worn. (The carabiners on the anchors are intended to make descent easy and are not booty - please leave them in place!). 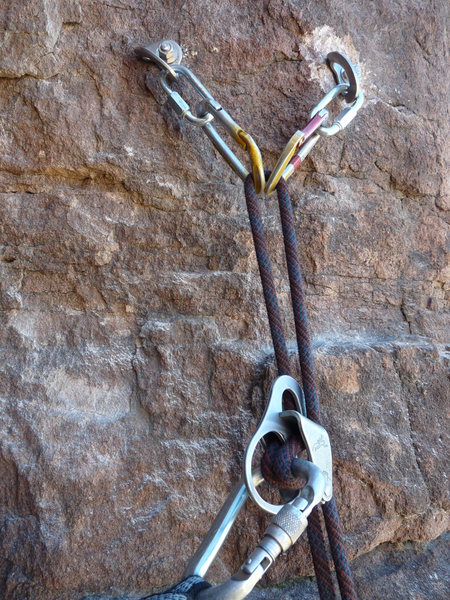 Driving Directions:
(same as for Lower Devil's Canyon) From Superior, AZ head east on US 60 for about 10 minutes. Turn right on Magma Mine road and continue 1.5 miles. Turn left on the dirt road. Follow this road for 2 miles. For 2WD vehicles, park here on the right side of the road, otherwise continue .2 miles and up over two hills and start down a steep hill. Just before a sharp right hand turn the road briefly splits into two lanes. If you have low clearance 4WD, park off the road here on the left. EDIT - the road quality of the previous section varies with weather and use. Use your own judgment when proceeding in anything but moderate to high clearance 4wd! With high clearance 4wd, head down the hill to a windmill (~.5 miles) and continue on the road until it ends at the top of a rough hill (another .3 miles). The top of Lower Devils Canyon is a 2 minute walk east. To continue to LDE, follow the approach directions below.

Approach:
LDE is plainly visible across the canyon from the Glitter Box area. Locate Entrance Tower using the overview map; it stands out in front of the other towers. Youll be heading toward this tower. From the top of Lower Devil's Canyon, follow the trail east and downhill through a short rock gully. Head downhill on the trail that forms at the bottom of the gully. After a minute or two the trail curves to the right and drops into a steep wash. The wash is easy to negotiate and leads to the bottom of the canyon in a few minutes. Cross the stream and head 50 feet downstream to a bunch of cairns and a trail leading uphill. Follow the trail uphill toward Entrance Tower. A second trail intersects the approach trail just before Entrance Tower; this one travels north & south along the spires. It takes about 20 minutes to approach from Lower Devils Canyon. 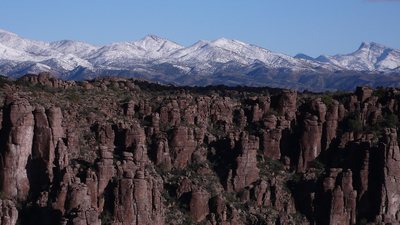 LDE with snow capped Pinal Mtns in the backgrou… 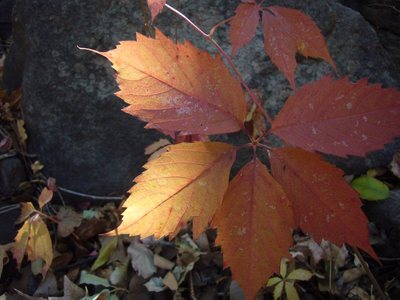 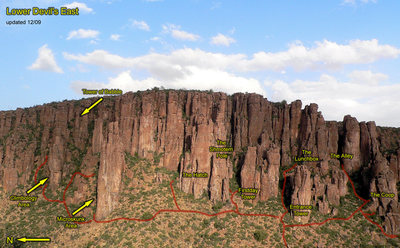 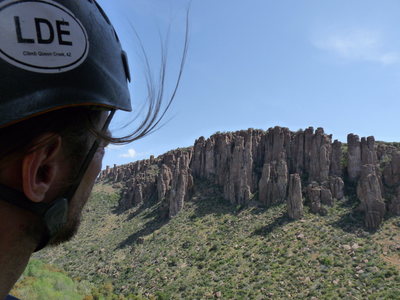 Geir, sitting atop the Totem Pole, gazes across… 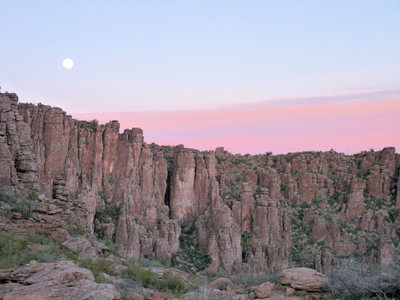 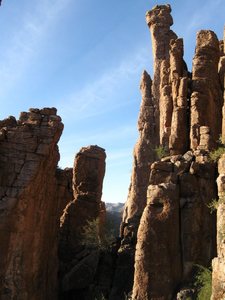 So much to climb, so little time... 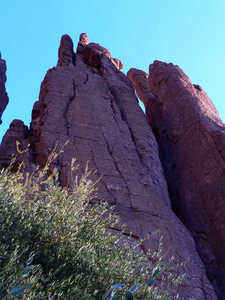 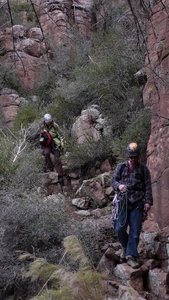 Marcy and Geir coming down from cleaning up yet… 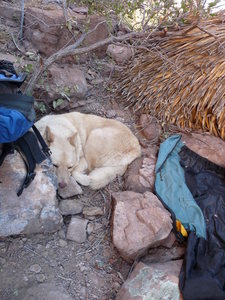 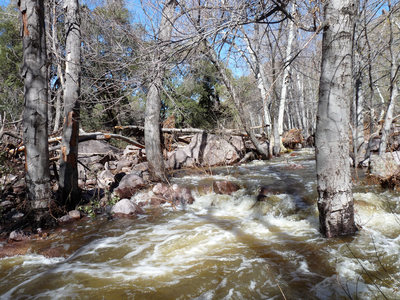 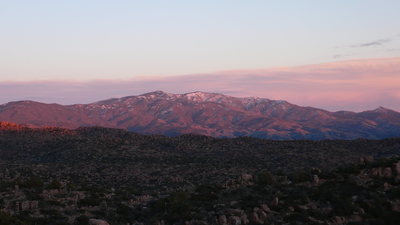 It is kinda funny to see how many snowy shots w… 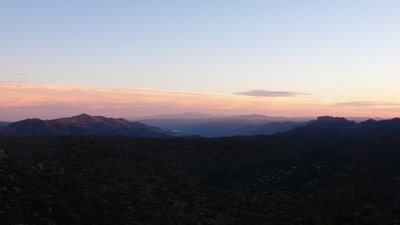 Driving in (or out) of the eastern side of LDE…