When climbers venture into this area for the first time, the anticipation is nearly staggering while driving the long meandering roads that zig zag their way miles into the Sierra backcountry. Along the drive, there is barely a rock along side the road let alone anything that might hint at being even remotely climbable. As you round the last few bends and drop down into the river basin, the first thing you'll see is several large campgrounds, usually totally empty except on weekends and holidays in peak season. These are some of the last totally developed first come first served free campgrounds you'll ever encounter. Especially in California, where everything seems to have a price. As you drive through the shady understory, a few small obscure cliff bands will stir your excitement just before the first dome comes into view. The first dome that you see is the North side of Hidden Dome. A jumble of rocks that looks like a series of massive boulders stacked on top of one another, this dome is nearly 900 feet tall, but gets almost completely dwarfed by what's to come. If it weren't for the impressive East side of this dome (which has a 600 foot vertical to overhanging wall hidden among its flanks, which upon viewing for the first time will absolutely take your breath away), this dome would probably have seen next to no traffic at all.

As you continue along your journey, the view of the massive Calaveras Dome and Hammer Dome come into view. The response most climbers have upon viewing this massive 2000 feet of nearly vertical rock is usually a moment of disbelief, as no one really expects it to be quite that big.
Calaveras and Hammer Domes are comprised of bullet proof granite, with striking splitter cracks that can go on for hundreds of feet, knobs that make negotiating the smooth slabs possible and dikes that resemble a pumped out burly climbers veiny forearms, which criss-cross up the wall, sometimes stretching for several hundred feet. There is something for every style of climbing here, and the grades can range from cruiser 5.7's, wild sphincter puckering .10's and .11's, all the way up to burly 5.13+ routes. Of these routes, there are plenty of single pitch routes to play around on. Especially on some of the smaller satellite crags around. However, most routes are 5 pitches or more, with routes like the Karakorum Highway clocking in at a staggering 19 pitches. There are even a few excellent grade V big walls one can venture up if that is your particular cup of tea.

There is ample camping to be found among the three established campgrounds (The Mokelumne, White Azalea and Moore Creek Campgrounds) which so far have remained totally free. They have pit toilets, fire rings, picnic tables, are relatively flat and most are close to the river. However, they can be fairly busy during peak fishing, hunting and holidays during the summer months. Not to worry, there are plenty of spots up the road where one can pull off and have a relatively secluded spot all to themselves. There is even a large flat quarry up the road near the power station that could park a hundred cars which many people just choose to use as a place to camp for the evening. This quarry even comes with one of the best views of Calaveras Dome. A spot which has been host to many eager climbers with a pair of Binoculars, hatching out new plans to ascend into unknown territory. The camping around this area is generally hassle free. There are no rangers with a ticket book in hand looking for any excuse to hand out fines, no such thing as "bandit camping" and you are almost free to stay as long as you'd like. So long as you move to a fresh camping spot every 14 days. But whos enforcing that? The area has been referred to being like camping in Yosemite in the 1960's. With using some common sense, cleaning up after those who don't, a little stewardship and some general respect for others, hopefully it will remain this way for many years to come.

The fastest way to get there is via Ellis Creek Road (Panther Road is significantly longer, and more dirt road). The road is mostly paved (though lots of potholes). There is one section where the road washed out, but it has been well repaired and is passable by any car type. The signage for the turnoff for Ellis Road off of 88 is not super-obvious (especially if you are heading west on 88)-- you are in the right place if you see bathrooms right by the turnout.

Panther Creek Road is another alternative to Ellis Creek just a few minutes down the road to the West. Ellis Creek is at a higher elevation than Panther Creek and typically takes longer to "melt out" in the spring. So if conditions are iffy, better to take Panther Creek, which adds another 15 minutes to your drive but is usually good if you don't see snow along the road at the turnoff. Which is not always the case for Ellis.

Tiger Creek Road is another alternative to approaching the domes. Though significantly longer (about 45 minutes longer on dirt roads) Tiger Creek is usually snow free year round and is the only option during the snowy months. Tiger Creek road is found just beyond the small town of Pioneer when approaching from the West.

Read or post at the Ellis road to Calaveras dome current conditions forum. 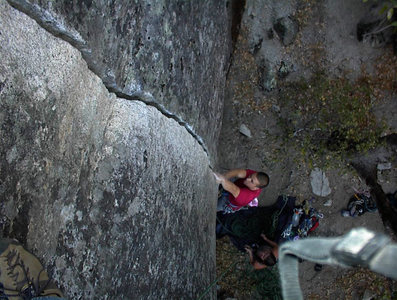 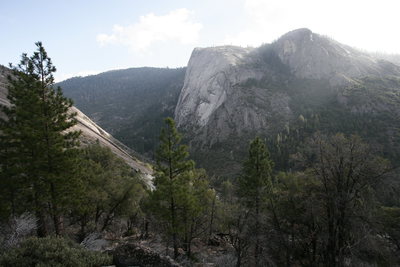 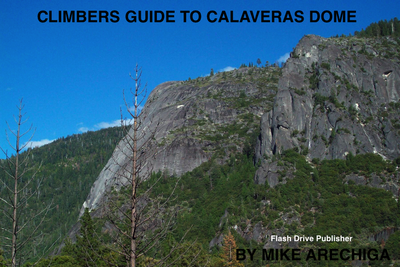 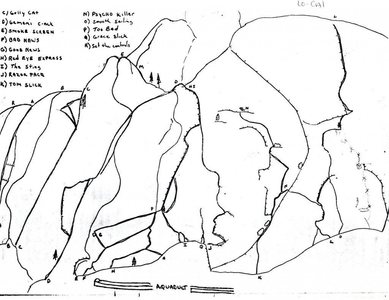 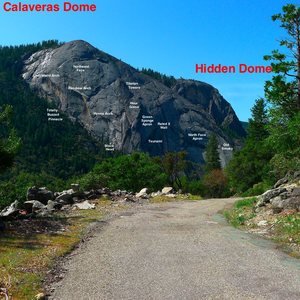 Over View Of Calaveras Dome. 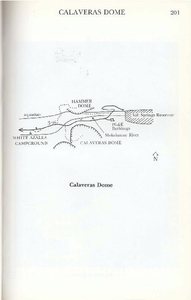 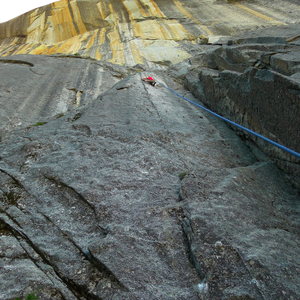 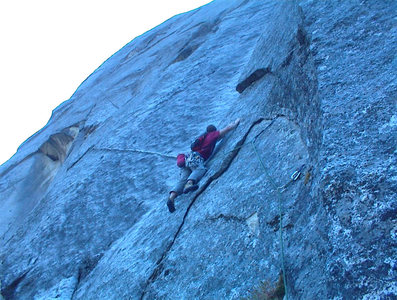 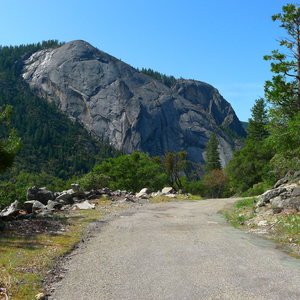 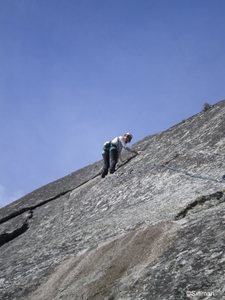 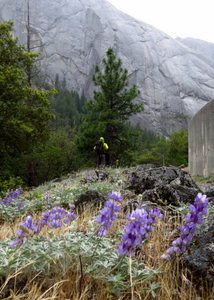 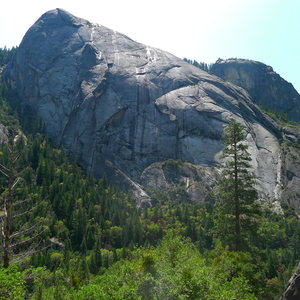 All Photos Within Calaveras Domes