The Karakoram Highway is a link up of three routes (Silk Road, Karakoram and Rastaman Vibrations) but is the natural line from bottom to top of the dome. If you have climbed the Rostrum or Astroman in Yosemite, you can climb this route. You'll just need a little more time on route.

This is the Traditional climbers dream line. It has often been referred to being like stacking the Rostrum on top of Astroman. You'll need to have a well rounded ability to have a shot at this one as it requires a full bag of tricks from difficult face, slab, offwidths, finger cracks, underclings, liebacks, fiddly gear, route finding and horrific exposure all while pulling off pitch after pitch of demanding climbing. It is nothing less than a pinnacle in ones climbing career and a benchmark to be had by any serious climber. Truly a world class route.

The route breakdown goes something like this; There are 19 pitches of which some can (and should) be linked. If linking pitches, you can do the route in 16 rope stretcher pitches. To link pitches you'll need to skip the first two (contrived) pitches of Silk Road and climb the corner (.10b) instead. Link pitches 3 and 4 to the hanging belay at the bottom of the enduro corner (pitch 5). Then link pitches 6 and 7 through the 5.9 dihedrals. That's about it for linking possibilities. That being said, you'll be looking at 5 pitches of 5.11a to .11c. 8 pitches of 5.10b to .10d including one .10b/c offwidth. Two pitches of solid 5.9 and an exit pitch of 5.6.

To start the route, climb Silk Road to the top of pitch 11 which is the top of the Tibetan Tower. I wont describe the pitches for Silk Road as they have already been well broken down. Refer to that route for details. However, you should skip pitches 1 and 2 and opt for the corner to the right instead as it will save some time. Link pitches 3 and 4, as well as pitches 6 and 7.

From the top of the Tibetan Tower;

Pitch 1.  (5.10b) Traverse left across the face following dikes and clipping a bolt along the way. Shoot for the bottom of the dihedral and build an anchor there. Its probably a bit further than you'll think. The gear leaves something to be desired, but I hesitate to call it runout.

Pitch 2.  (5.10b/c o.w.) Climb the striking offwidth above using armbars and curse words to propel yourself upward. Try and save some skin on your hands for more pitches to come. Let your back elbows and knees take the brunt of the assault.

Pitch 3.  (5.11b) Climb the diminishing left facing corner until you're forced more or less to basically face climb on the corner. Awkward and delicate. You're ego should be well gone by now, so pace yourself and rely on blind faith instead.

Pitch 4.  (5.10dR) Follow the thin cracks above trending left toward the massive roof system. The crack peters out to a blank slab and some psychological gear which seemingly barely holds its own weight. Forget about the gear and put that master footwork to good use and you desperately tiptoe your way to good holds and gear which are just out of reach. An attentive belayer should be back at the belay waiting to take in slack should your footwork not be up to par and not munching on cliffbars and ham sandwiches. This pitch has already resulted in one broken arm. The runout section is only a few moves of difficult slab. You can almost jump for it. I didn't have the balls. But wait!.... theres more!! Now that you've negotiated the runout, you're rewarded with what seems like miles of wide, flaring offwidthy roof no amount of climbing could properly train you for. Remember that skin on your fists you saved back on pitch 2? Here's where it comes to an end as you jamb your way across this geological oddity. You cant haul up gear wide enough, so save what you got and place it sparingly. The crack thins down toward the end allowing for more options, but it feels like a long journey getting there. Luckily, because there are no feet to speak of, your falls are clean as a whistle.

Pitch 5.  (5.11a) WTF? You got this kid. Easier than it looks for sure. Short and sweet. Terrifying exposure to a kick ass ledge!

Pitch 6.  (5.11b)  Enjoy the ledge, because you're about to pay penance to the dihedral above. Start up a nice thin crack which diminishes to a mere ruminant of its former self. So thin a lizard could barely hand jamb his way up. Now fiddle in gear while resting in a .10+ corner and commit to the few moves above which gets you in the main corner. I hesitate to call it R rated, but you better have some offset micro nuts. Much like the last pitch of Astroman. Committing, but not overly so. Except instead of topping out, you basically have the endure corner above you. Now pay up and earn your spot on top of this dome by going to battle with this long, relentless lieback. One of the more enjoyable pitches on this route. It has great gear, better fingerlocks, but hardly a rest to be found. You're sure to be pumped out of your mind when finished with this test in lactic acid tolerance.

Pitch 7.  (5.9) The guidebooks call it 5.7. I call that bullshit. An awkward journey through an alien landscape of undulating rock and mysterious lichens will bring you to a hole where you can build a belay. The anchor is difficult to spot, but you'll more than likely not care about such details at this point. Just run the rope up until you run out and build an anchor there.

Pitch 8.  (5.6) A trivial pitch which seems more like a cruel slog to the top of the dome.

Descend the route by walking down around the dome in the gully to the east. This descent will begin to quickly seem like a cruel joke and may take you hours. Not unlike the descent from the Sentinel in Yosemite. Long, arduous bushwaking with no end in site. Bring headlamps!

An alternate descent is to rappel the "EDP" rappel route. A series of 9 mind numbingly exposed rappels down the East face of the dome. The rappel starts a good distance down the slabs just left of the top out of this route. They're difficult to spot. Setting up a rope to lower someone down to find the first set of anchors is not a bad idea.

Cams, doubles to 3". One 4" piece warranted, you could even use a 5' piece if you don't revel climbing above your gear in offwidths.
Nuts, 1 set of regular and 1 set of micro offsets. (Peanuts or equivalent) 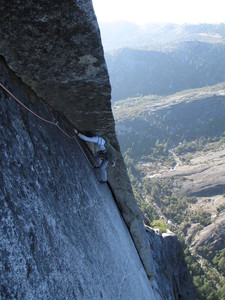 Finishing the final traverse on Pitch 10 of the… 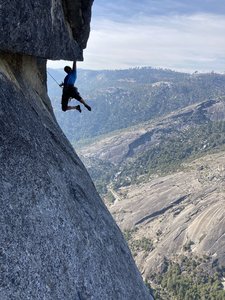 Top of the diminishing corner. The perspective…

Hannah's reaction after topping out the last 5.… 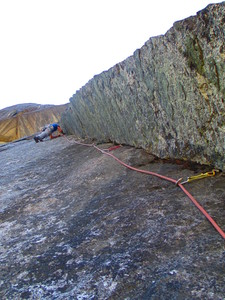 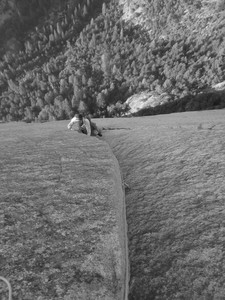 The diminishing corner. Pitch 11 of the Karakor… 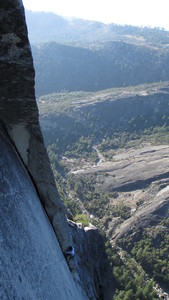 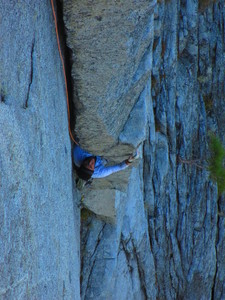