September 4 to December 1: the NCAR-Table Mesa/Bear Trail will be closed because of Xcel electric construction work. The NCAR-Bear Connector Trail may see intermittent, full-day closures because of this work.

Per the FCC: September 5 and September 6: the NCAR-Bear Canyon Trail, the NCAR-Bear Connector – along with a Mesa Trail section from NCAR to Fern Canyon– will be closed because of Xcel-related electric work.

Mid-September through Mid-November: the NCAR-Bear Canyon Trail between Stony Hill Road west to NCAR-Bear Connector will be closed 8 a.m. to 5 p.m. Monday through Friday. This closure will help OSMP complete some of the department’s final 2013 flood-recovery work to repair trails and restore wildlife and plant habitats in the area.

Overhang Rock does not look like much from the East, but when looking back from the West, it appears to loom over Bear Canyon like a guardian demanding its due. This gorgeous, huge fin holds only a fraction of the routes it could. In the mid-'80s, when Boulder was deciding whether to advance into the future of climbing or succumb to the righteous protectionism of the Boulder City Council, a handful of climber/athletes started developing the West faces of many of the Flatiron crags. Close on the heels of Dale Goddard's Five Year Plan, Overhang Rock saw two new additions to its then sparse development. Nothing has been added to my knowledge since 1988 leaving numerous difficult possibilities untapped. However, in the mid 2010s, development continued, and now several long 12+/13- sport routes have been installed on the face.

Climbing on the Overhang Rock generally fires vectorially up its yellow West face, with some of the routes running through the obvious roof system above. Numbering here begins on the left arete (North edge) with #1 being the Layton Kor classic, Rogue's Arete. Climbing difficulty spans the gamut with several moderate trad routes and a more difficult lines from 5.10 to 5.13.

Take the trail From NCAR down to the service road. Head South, and after the road winds up-hill a ways the trail to Bear Canyon will branch off into the canyon. This is near the power lines that are protected by a wire fence. After several a hundred yards or so and across the canyon from Stonehenge, follow an indistinct "trail" up to the talus field below Overhang Rock. Expect 3rd Class terrain.

Per a bloc: this is an updated approach thanks to FCC. Park at NCAR or Bear Canyon, and hike to join the southbound Mesa Trail. Wind up the steep, easy, paved section to the Bear Canyon turnoff. This is near the power lines that are protected by a wire fence. After several a hundred yards or so, you'll hike a bit past the formation, and the trail will flatten out. Look for a trail heading backwards and hiker's left towards the rock. This trail was improved in 2019 and has a log staircase leading to some talus hopping at the end. It is no longer a loose scramble. 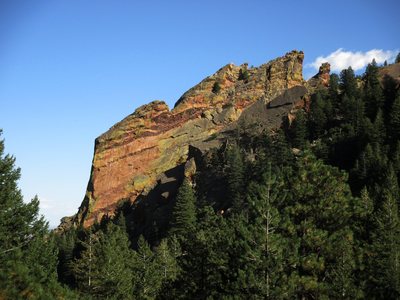 A view of Overhang Rock from the West on Gregor… 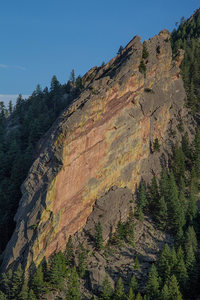 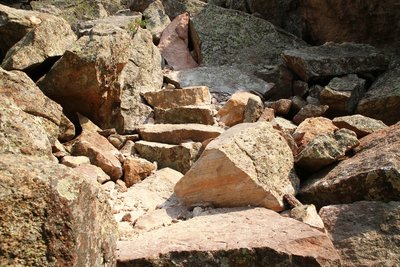 The FCC with the help of volunteers and OSMP ha… 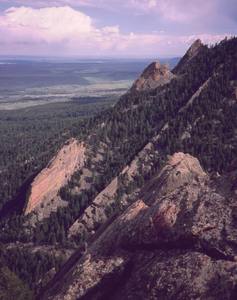 Overhanging Rock, The Seal & The Goose as viewe… 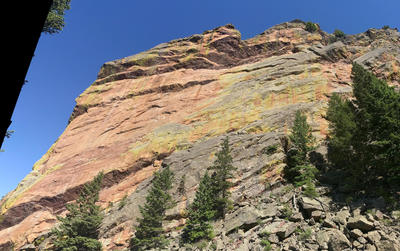 The face of Overhang Rock. 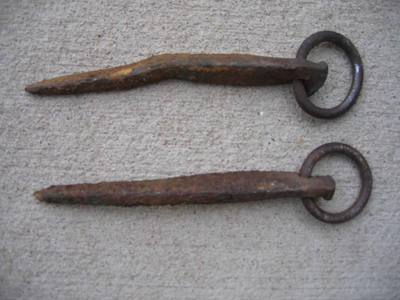 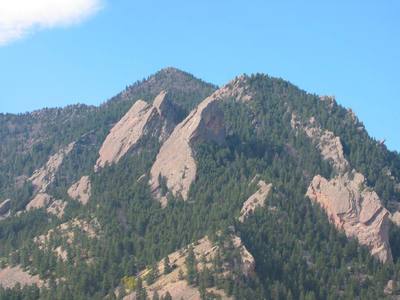 All Photos Within Overhang Rock