September 4 to December 1: the NCAR-Table Mesa/Bear Trail will be closed because of Xcel electric construction work. The NCAR-Bear Connector Trail may see intermittent, full-day closures because of this work.

Per the FCC: September 5 and September 6: the NCAR-Bear Canyon Trail, the NCAR-Bear Connector – along with a Mesa Trail section from NCAR to Fern Canyon– will be closed because of Xcel-related electric work.

Mid-September through Mid-November: the NCAR-Bear Canyon Trail between Stony Hill Road west to NCAR-Bear Connector will be closed 8 a.m. to 5 p.m. Monday through Friday. This closure will help OSMP complete some of the department’s final 2013 flood-recovery work to repair trails and restore wildlife and plant habitats in the area.

"The Ouroboros is an ancient symbol depicting a serpent or dragon eating its own tail. The Ouroboros often symbolizes self-reflexivity or cyclicality, especially in the sense of something constantly re-creating itself, the eternal return, and other things such as the phoenix which operate in cycles that begin anew as soon as they end. It can also represent the idea of primordial unity related to something existing in or persisting from the beginning with such force or qualities it cannot be extinguished (December, 2014 Wikipedia definition)."

Ouroboros is located between Snake Watching and Honey Badger and is similar in both length and overall difficulty to its two neighbors. The climbing is engaging and sustained, and some may think a wee bit heady. Do not be deterred, though, for the rock is steep (by Overhang standards) and the falls clean. A stout crux right after the first anchor leads to sustained 12/12- climbing past the curving flake feature and smack up the big, green streak to the roof system above, where a good rest followed by yet another cruxy boulder problem await. Sequential (i.e., totally punt-able) climbing for the last 2 bolts puts you at a huge jug and the chains.

The climb is roughly 40m in length, with a midway anchor at 60 feet (12a - good as a warm-up lap route) - a 70m rope is required to lower to the first anchor from the top. A second lower from there will get you to the ground. I do not have an 80m rope, so I am not sure if you could lower all the way to the ground with one, but that may be possible. At least a 70m rope is mandatory.

This was named in honor of my good friend, John Mahaffey, who left this world while this route was being established but whose irrepressible force is still far from extinguished.

It has 18 bolts plus two 2-bolt anchors. The route curves in the middle, so long draws are nice on several bolts. Overall, the rock quality is excellent, but like many of the routes at Overhang, one does not need to stray too far off the beaten path to find choss -- we did not go buck wild with cleaning on this thing in an effort to minimize rock scarring. Climb carefully when first trying it.

Many thanks to OSMP, the Access Fund, and the Flatirons Climbing Council for making new-routing possible in the Flatirons! Also thanks to Kirkadirka and Ben Sachs for tons of help throughout the process.

This is on the West face of Overhang Rock between Snake Watching and Honey Badger.

18 quickdraws including some long slings plus 2-4 for anchors. 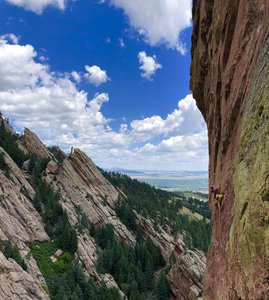 Liz working her way up. 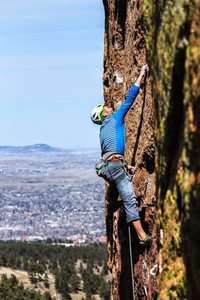 Kirkles on an early attempt. 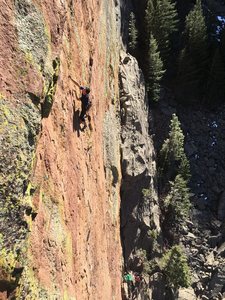 Kevin approaching the upper roofs on his suss b… 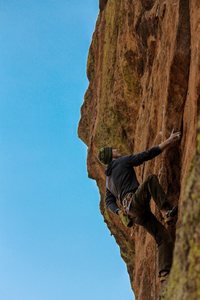 On an early attempt.