Nalazak is a beautiful and soaring 70m pitch right in the center of the Hulk. After some heads-up introductory 5.11 climbing up a corner/crack, the glory and pump begins as you launch up a golden overhanging wall. A dangly bucket rest is reached below a piton, with the route being about .12d to this point. Shake out, clip the pin, and make your way into the hanging dihedral. 5.12 jamming and stemming leads up the corner until a bolt is reached on the right face. Clip the bolt and do an amazing tech V8ish boulder problem out right to gain the spectacular arete/fin, and a much welcomed no-hands stance. Belaying here is impossible due to the rope-drag running around the fin. Fortunately, a few moves up the arete the rope straightens out and drag minimizes again. Clip bolts up the .11+ technical and exposed fin finale to reach the anchor. "Nalazak" was a man who rode across America from the east coast to Mono Village, where he hiked up to the Hulk and rope soloed Red Dihedral. He took a large whipper, got benighted in a snow storm, claimed to almost suicide due to his suffering, but persevered and finished. The next day he rode up over Tioga Pass, where, with wide eyes at his tale, I checked him into a campsite in Tuolumne. Matt Ciancio and I called each other Nalazak for years while climbing up on the Hulk, esp when the sun got low and a whipper seemed likely!

Starts from pitch 2 big belay ledge of Positive Vibes/Venturi, between the two. It ends at the pre-existing anchor on the upper part of Positive Vibes pitch 4. This amazing pitch can be done for it's own sake as a beautifully located hard pitch, or as a variation of Positive Vibes, Venturi, or several other routes.

16 bolts and gear from small nuts/grey tcu to #4 camalot can be placed...especially many green and blue aliens(but only so much gear can be carried on such a long and hard pitch!) Shoulder length slings should be used on many of the bolts/gear placements in order to minimize rope drag on this looooong pitch. The entire pitch can be toproped from above by climbing up positive vibes, or the lower half can be toproped by swinging out right from the pitch 3 anchor on positive vibes. 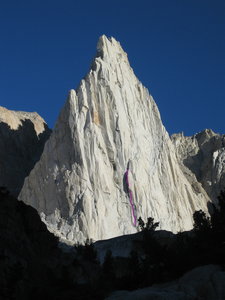