Flatiron Adventure Climbing! If you liked Tangen Tunnel, but want something with a little more teeth, this route is for you. Several variations exist, as this route is somewhat contrived, but the best line seems to be -

When in doubt: GO DEEPER.

P1: start on a boulder right of a large tree that guards the entrance to a natural arch. Climb up towards a chimney on good holds. Once off the boulder and on the route, the exposure will hit right right away, as the rock is overhanging. Gain the entranceway of the deep, vertical chimney. This may be a tight squeeze to have a pack on. Climb the chimney, traverse out climber's right/east (crux, 5.6) on good holds. Keep just to climber's right of the chimney, in a cleft.

P2: (5.6) oOnce above the initial chimney, dive deep into another chimney system that's further back into the wall. You will descend slightly here into a cave with a flat-enough/large-enough area to set a righteous bivy in. Climb up the chimney, which starts vertical, then hems and haws a bit in a playful way.

The chimney will have a roof above made up of a large chockstone. For the full experience, dive deeper into the rock and find a man-hole sized opening streaming in light from above. Stem your way up to the top of the opening (crux). Easier escape can be made by scrambling up on the other side of the roof/chockstone.

P3: at the manhole-sized opening, scramble down the gully below the massive overhang of the South Block on broken terrain to its end - the gully cliffs out. Your objective is to climb over the wall to the north (crux, 5.3). Traverse up and over into a incredible, narrow ribbon of slab that will take you NW to the top of the South Block (5.easy). The terrain will be similar to the South Sneak - footholds seemed chiseled into the rock, and the scrambling here is delightful. Exit slightly before the end of this literal ladder to the top; scramble to the top of South Block.

BONUS: cross the gully between the South Block and the Pullman Car, and climb up South Face (5.6) to finish up on the summit of the Second Flatiron.

This is on the South side of the South Block. It may be easiest to hike up the First/Second Flatiron trail to the top, then head south, hugging the South Block. The terrain will start breaking up with large boulders to scramble down. Look for the arch and a large tree growing to its south. The start of the route is on a boulder, just east of this tree.

Sparse, if any. Consider this a solo. 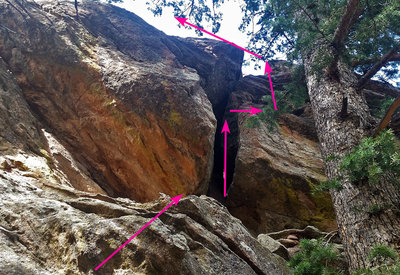 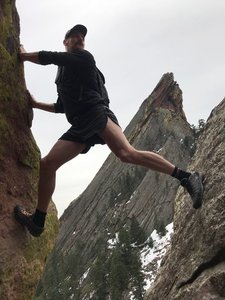 P3: scrambling up to the narrow ledge that allo… 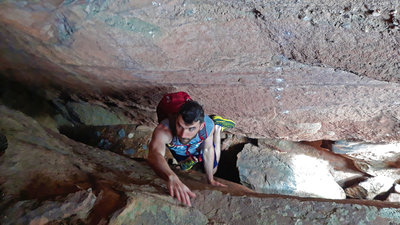 The vertical chimney on the start of P2. 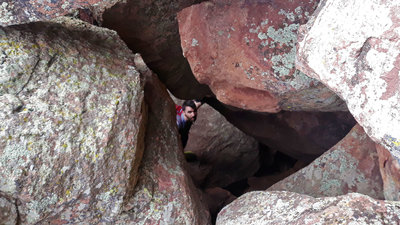 Looking down into the manhole-sized opening fro…

More About I Bleed