The Compound is the longest traverse in the Boulder area, clocking in at around 145 feet with potential to be extended to 200 feet for those willing to low-ball a bit. It sits in a spectacular spot high on the east face of the Second Flatiron and catches plenty of sun, making it a nice hang on cooler days and an all-around fun place to get away from it all.

The approach involves a fair bit of scrambling. The safest approach is from the Gutter, which sits at the bottom left (southeast) end of the Second under the huge roof. Scramble up and north from the Gutter and drop over a notch into the big gully. Cross the gully on a climber's trail and scramble up a ramp to reach the base of the wall. The Compound is actually the overhanging backside of the 3rd class rib for the standard East Face route, and can be approached via that route as well (5.0 solo). It sits directly under the Boxcar or Pullman Car, the large, colorful overhang on the right (north) side of the Second's upper reaches.

Begin low and right in a sit-start in a little pit filled with raspberry bushes. Continue left along the colorful wall, staying off the jugs up and over the lip. The last 50 feet of the traverse, where it overhangs radically, are the crux.

I've heard this called V7 on the bouldering scale and 13a on the route scale.

A crash pad could be of use in a couple spots along the length of this traverse. A spotter is certainly welcome. 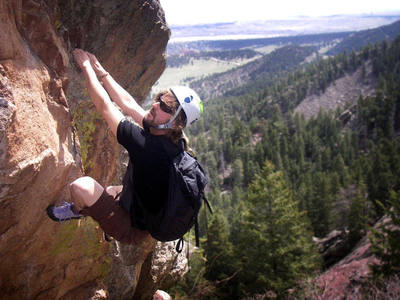 Ryan trying a few moves in The Compound while w… 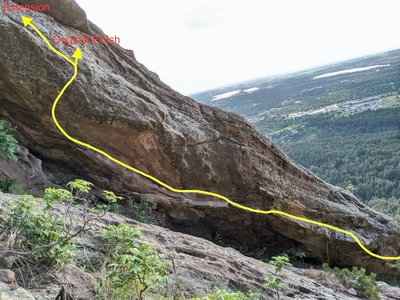 The ending & crux of the Compound. The extensio…

More About The Compound