Scramble directly up towards the large tree growing right below a slanting ledge that's large enough to fit an entire family on. There's a roof broken up by a single, large crack running into the formation - about halfway up the route. Overcome the gap made by the ledge with a committing move (crux).

Above is fun scrambling to the summit.

Note: there is another route on the south face of the Pullman Car called South Side in Roach's guide, located a further 100 feet east of this route. South Side can also be found next to a tree and near a crack. The tree on Southside is at the base, and the crack runs more or less vertically up most of the face.

Many other south-facing routes exist on the Second Flatiron, but you'll find them technically on the South Block.

Approach the climb by going around the west side of the formation and scrambling down a bit to the south side. The base of the route is located at the tree growing about halfway up the face. Start below the tree. Alternatively, use this route to finish up any South Block routes, such as South Ridge, or South Sneak.

Roach lists this in his second edition as 5.2, but the crux is much harder - harder than any move on the last pitch of Free For All (listed as, "South Side" in the same guide and rated at 5.6) and most certainly harder than the West Face route. If it was easier, this route would be the normal downclimb.

I've attempted this route many times thinking there must be something I was overlooking, having always backed down, until one day I just decided to commit to the move. The crux is a good 20 feet off the deck, so flubbing up the move would have consequences if soloing. This pitch has many options for gear, including the tree by your foot, when you're at the crux.

A standard rack I guess. One could essentially bring something to sling the tree and feel good about things. The rating is really only for that one move. The rest is (my opinion) Class 4. 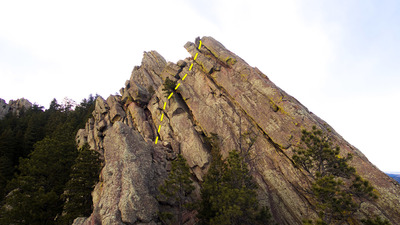 The South Face of the Second Flatiron.