Routes in The Bunker

This is a classic jughaul in the vein of Sprayathon - steep and overhanging virtually the entire way - but with a more distinct crux at 1/3-height. The first body-length roof is skirted to the left, and the second is not as difficult as it appears thanks to some clever jamming opportunities. However, getting established on the headwall immediately above may cause some trouble.

Begin from the far end of the upper-right fixed line. Work up and left up the slab, careful to skirt the X-marked death block. As the wall steepens, jugs appear where you need them, leading up and left around the first roof. Cop a quick shake at a decent stance below the intimidating ceiling. Foot trickery and trad skills will get you to the lip. Crank strenuously up a set of bottoming pods in the big, left-facing offset until its possible to throw a foot onto the steep slab. After a well-earned shake, crank through the pegmatite on solid-albeit-flakey jugs to reach the Gunks-like quartzite above. Race the building pump up the unbroken chain of amazing jugs, heel-hooking, toe-camming, and kneebaring along the way to reach the lip of the cave.

Full Metal Jacket is just right of the center of the cave, beginning from the far right end of the upper-right fixed line. The start of the route is shared with 14:59. These routes can be belayed from the stance just below The Bottleneck from a semi-hanging belay from a 1-bolt anchor (which can be backed up with finger-sized cams) at the end of the upper-right fixed line or from a nice flat stance at the far right end of the lower-right fixed line. The latter is probably the most comfortable for all parties. It has also been done from a belay on the Dirt Ledge, but this is not recommended.

Many bolts to a 2-bolt anchor, currently all are fixed except for the first bolt (on the slab). 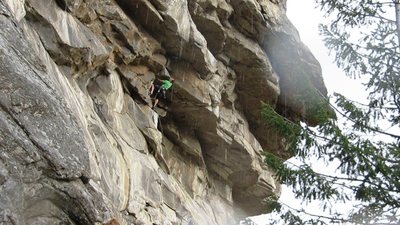 The low roof shared by Full Metal Jacket and 14… 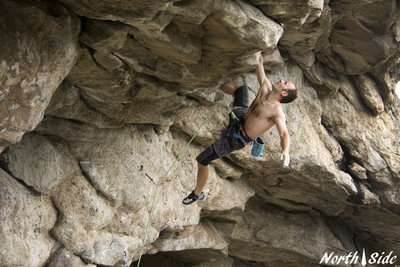 Classic jug hauling at the end of Full Metal Ja… 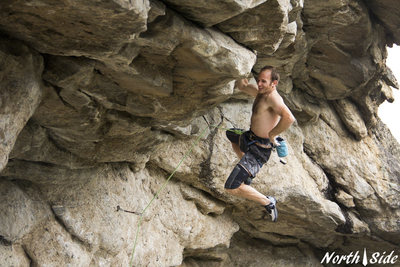 Monkeying around on one of many hand-swallowing… 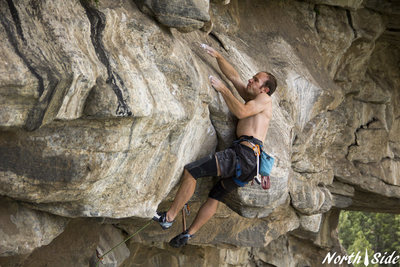 The crux pull onto the pegmatite mini-slab.…