Born on the 4th of July

Routes in The Bunker

The most radical free climb in Clear Creek Canyon-and perhaps the entire state-monkeys out three tiered roofs for a total of 30 feet of horizontal climbing. This gob smacking line culminates in a magnificent foray out and over the piercing visor that caps the right half of the Cave. To call this line improbable would be a massive understatement.

The line was rappelled, cleaned, and equipped over a 6-hour marathon session on July 4, 2014. The unbelievable steepness of the feature is outpaced only by the magnificent setting, some 800 feet above the river and dramatically exposed. These characteristics are matched by excellent, clean stone that provides remarkable jugs right where you need them.

The business is all horizontal, utilizing nearly every trick in the roof-climbers handbook (though surprisingly no mandatory kneebars). The climb begins with a short, vertical pillar to reach an eight-foot roof. A fingertip rail slashes across this feature, leading to a burly slap to jugs at the lip. From here, campus right along slopers, then rock up to an easy stance below the second roof. Balance over this obstacle, clip out the last roof, and chalk up one last time. Launch out the stunning, core-burning brim, climbing slightly downwards to reach the lip and a remarkable set of perfect jugs. Throw up a foot, slam in a bomber fingerlock, and mantel precariously onto the floating slab.

Bot4oJ is the furthest right line in the cave, beginning from the far right end of the upper-right fixed line and climbing out the awe-inspiring visor. This route can be belayed from the stance just below The Bottleneck (poor), from a semi-hanging belay from a 1-bolt anchor (which can be backed up with finger-sized cams) at the end of the upper-right fixed line, or from a nice, flat stance at the far right end of the lower-right fixed line (aka Long Ledge). The latter is probably the best option. There is also an 8x2 ledge about 20 feet down and right from the routes first bolt that could potentially provide a nice stance (2-3 cams?), but it would be hard to get to.

All fixed, but you may need to add some slings to mitigate rope drag.

NB: the chains are located to facilitate lowering without shredding ropes. They do not mark the end of the free climb. 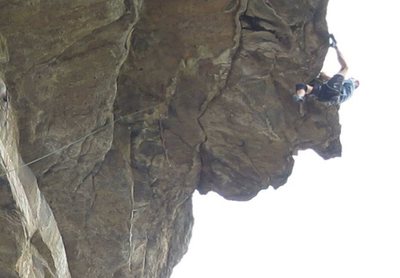 Beginning the tricky mantel onto the floating s… 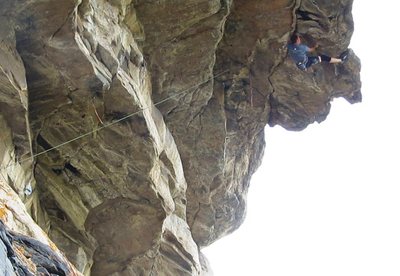 Climbing out the wild visor. 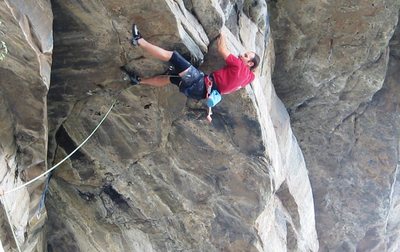 Pulling over the lip of the first roof.

More About Born on the 4th of July