Hell in a Handbasket

Very fun route with a little of everything. I'm surprised this route doesn't get as much traffic as some of the other routes on this wall. Maybe because of the over-rating in the guide books(?).

Scramble up to first bolt then continue up through balancy crux to second bolt. Follow sustained mild 10 climbing to no hands rest then up through bulge 10c finish. Route goes over three fairly distinct bulge sections, the hardest of which being the last. After the last bulge, a scramble takes you up to the anchor which is shared with Ass Over Teacup.

Good route for those working through leading 10s. The cruxes are well protected and there are lots of nice rests.

First route to the right of OK Corral. It is the left-most of the two in the alcove between OK Corral and the left facing dihedral.

Very well bolted from about 30 feet on up. Some generous spacing between the first few bolts so folks not solid on 5.10 be aware!

The route can be rapped with a 70m but you may have to swing over to a boulder to the left; knot the ends!! A top rope from the [shared] anchor would have a lot of rope drag. Instead, it's possible to use two 36" or 42" slings on two bolts (one borrowed from Ass Over Teacup) at the last bulge to make a top rope anchor. This can then be cleaned by continuing (leading) up to the anchor then rapping to either OK Corral anchor (with 60m) or to base (70m). 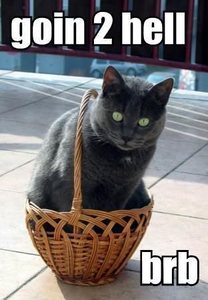 More About Hell in a Handbasket