Routes in Upper Tier of The Grotto

Guillotine Crack is the among the finest of the crack climbs in Diablo, with perfect jams through pumpy cruxes. Great positioning high above the canyon with good gear makes this climb worth it. It might be found hard at 5.10, especially if you're not tuned into Indian Creek-style crack climbing. While the route's name is ominous, the Guillotine Flake for which it was named was removed from the route long ago.

Only the excellent 2nd pitch is described here. The original first pitch is in the lower tier and so it is posted on the Grotto Left (East Side) page; named Snazz by Nazz by some.

Start at the 2-bolt belay below the upper tier. 30' of chossy blocks leads to the business, an obvious overhanging hand/fist crack in a dihedral (crux). This physical portion is passed by good jamming in the corner, or by strenous liebacking, but is followed by a rest. Next is a 2nd crux, an overhanging thin hands/hands section (also solid 5.10). Easier crack climbing leads to a 2-bolt anchor just below the rim.

The first ascent history, seems to have a bit of lack of clarity.

*Karl Kiser says this route was not climbed by the old timers, because of a "huge flake left of the crack down low" which he, with Chris Kessler were able to clean from the climb. This would have been in the mid 90s (?).

*Denny Newell reported he and Jacques (?) climbed this line in the mid 90s, and that there was a giant scary flake that was going to give them the axe. He said they were searching for the 5.11 noted in Rock-N-Road. This was before there were any sport climbs at Diablo.

*D. Jackson, in Rock Climbing New Mexico, says the FA was Ken Sims in 1989, along with Rolling Brown Out the same day.

*Despite Karl Kiser’s comment, the best part of this route was climbed by the old guard (Ken Sims leading with Paul Drakos following) by rappelling down and belaying from the top of the widow maker flake which was remarkably solid, until it later fell off.

*The anchors were put in by Bradshaw, and Kisel/Newell/Beguin.

Descent: Rappel the route back to the Grotto with 2 or 3 rappels with a single 60m rope. The top rappel is just over 30m and won't quite reach the bolted anchor with a 60m, but you'll get close enough (make sure the ends are even!). The 2nd rappel is also too far to get to the ground with a single 60m rope; a 70m will work, or split it up by stopping at the Chopping Block anchor.

Walking off is a longer but reasonable option.

Guillotine Crack is the obvious crack splitting the upper tier of the Grotto above its entrance; it is to the right of the sport climb Mary Poppins on the upper tier.
Guillotine Crack is above the excellent lower tier sport climbs such as Good. You can reach the quality 2nd pitch by climbing this route, or use the original approach pitch up a 5.8 dihedral to the left of them (Snazz by Nazz, also called Access Crack in the guides).

2-bolt anchors installed at both the start and finish of the 2nd pitch, thanks to Rick Bradshaw, who installed the upper anchor; and Scotty Beguin, Ken Kisiel, and Denny Newell, who put in the lower anchor. 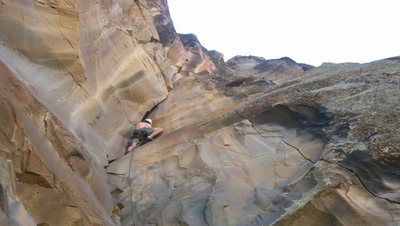