Found on the west face of Old Easy, 'MRC Direct' (#1 on topo) is one of the most striking lines encountered at Vedauwoo. While it is a true hand crack classic, it may be climbed less than one would expect.

Several cracks overlap and intersect witheach other, making it seem more comfusing than it really is. It is the most central, 2 pitch line with a belay station (B) midway, just under the prominent roof. The crux is turning the roof! After this, one moves up and gradually right to the second belay (on gear). To get to the rap anchors (XX), one climbs up and left (facing the rock) to the rounded top of the formation. Double ropes will get you down in one rap, but a single 60 M rope requires an intermediate stop at the 1st belay station under the roof.

Other variations: MRC Left (#2, 5.7) strikes out left from the first belay on 'Direct', traverses 25' along a ledge and ascends a prominent handcrack which widens to offwidth near the top. The top belay is on gear. The rap is the same as for 'Direct'. The Seam Variation (#3, 5.10a) starts midway up the first pitch of 'Direct' and is then continuous with 'Left'. Ralph Called (#4, 5.10b) is the left crack above the roof of 'Direct' which goes vertical and is continuous with a bolted face to the top rap anchors. Finger Trip Roof (5.10a) is a harder variant of the prominent big roof of 'Direct', taken by going up the right side of the roof, somewhat off line. 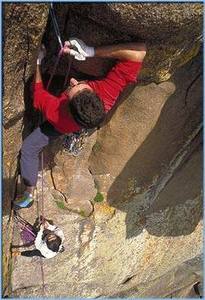 Mat Schock getting the critical clip before the… 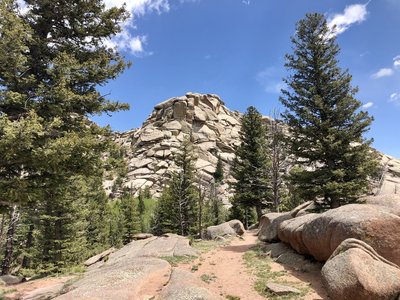 MRC Direct from a distance. 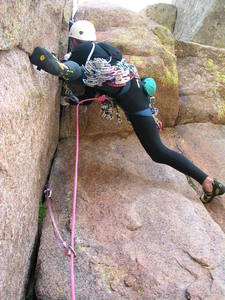 Rob about to turn the roof on MRC Direct. The… 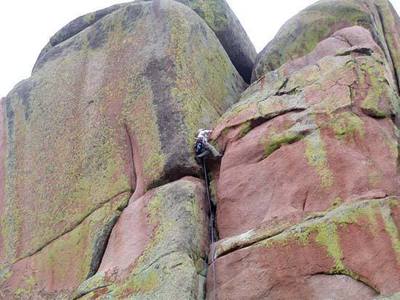 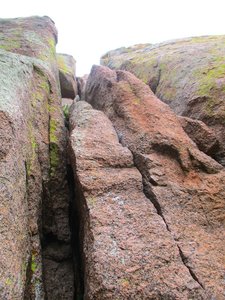 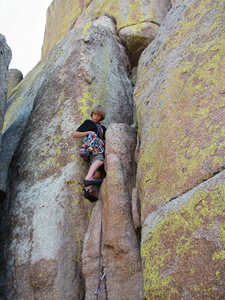 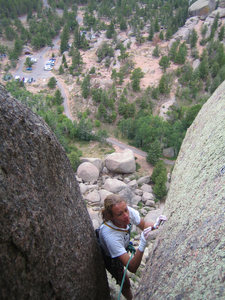 Katherine Chumacero on the finishing moves of M… 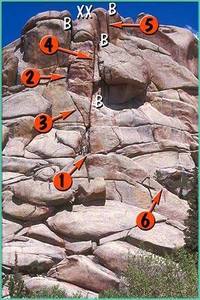