Per Henry Lester: all the dirt roads into the climbing and camping areas are closed to motorized vehicles until July 2015 because of resource degradation.

Per Henry Lester: all the roads have been reopened as of June 2014.

Sustained crystalline friction at 5.9, first 3 bolts. Tech crux at the 4th bolt (might even be 10a). Rob Kelman, guidebook author, downrated route from original rating of 10a to 9 in 1994's "Heel & Toe." Recently (2007), Rob said, "It's become harder. Couldn't be because I've gotten older, could it??" This would be a bad route for the second to fall of of, hence I have added two more bolts in the middle section & one at the very top.

Look for an obvious line of bolts on the rounded arete to the left when about to begin the 3rd class approach to MRC. Standard descent from Old Easy's MRC area.

All 3/8-inch bolts. Sustained crystalline friction at 5.9, first 3 bolts. Tech crux at the 4th bolt (might even be 10a) with sporty reach to easier ground at the 5th [new] bolt; 6th [new] bolt sets up leader to 5.4 moves to [new] 6th bolt, leading to loose, gravelly crystals at the 7th & 8th bolts. [New] 9th bolt protects second from the big swing should footing be insecure. Natural anchor (an 18-foot cordelette works well around the boulder at the top). At the middle section, we used to reach over the arete and place a few small Camalots in the crack underneath, but being as that was "Department of Prior Knowledge," I chose to add bolts here this year (2007). 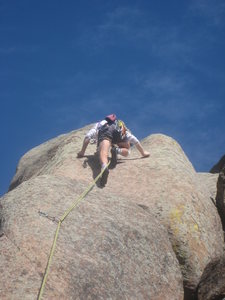 Thin edges at the crux (photo by Phil Ashton). 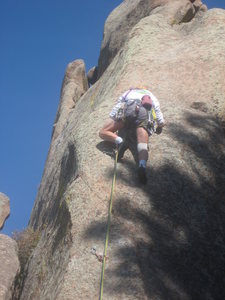