This route shares the start of Unemployment Line, about 20' left of Osiris and ascends 120' up the blocky corners on the sides of the multiple roofs to a lone cedar tree. There are still some loose areas, and thus helmets should be considered mandatory until it cleans up. I really liked the aesthetics of this climb, particularly as I moved past the roofs. It was steep and exposed, with positive moves throughout with the occasional thin move thrown in. It required a good lead head, but was a lot of fun.

A reasonable facsimile of a belay stance can be fashioned from the two-trunk tree at the base of a dirty groove at the bottom of Unemployment Line. The leader starts about 10' upslope from the belay where a short left-angling crack leads to a dirt stance about 15' above the belay. At the stance, you may want to flip the rope over the trees to reduce potential rope drag, but this does require your second to climb the dirty groove to attain the stance. From the stance, move up through the first two bolts of Unemployment Line (use long runners to avoid rope drag). Prior to the third bolt of "Unemployment Line" (don't clip, as the rope drag is stunning if you do) move right to the seam/crack that moves up the right side of the next two roofs. After the second roof, move up and left of the third roof. Then continue up to the right of the next roof, and to the left of the final roof. Once on top, angle left to the lone tree atop the formation, and belay. "Rappel from the rappel ring on the three rounds of 9 mil rope around the tree using two 60 meter ropes, orcontinue on to pitch two.

Pitch two (5.5) follows the left slanting ramp atop thepillar of pitch one to a smooth shield on the right(50'). Ascend the shield and then move up and left to the top of a largepillar and set up a trad belay (100').

Pitch three (5.6) moves horizontally right from the belay,around the base of a large block via a horizontal handcrack (40'). At the right edge of the block, movestraight up, following the major weaknesses to an exitvia a delicate high-step, and belay from the obvioushorn (80'). Walk off the descent trail to the right."

Quickdraws for the first two bolts of Unemployment Line, and then use everything from micro-nuts to a #3 Camalot for the rest of the route. There are a few runout sections where pro is not available. 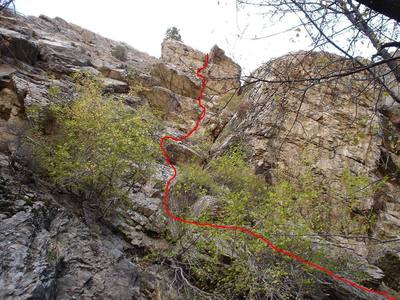 View from the belay of Spastic Funk 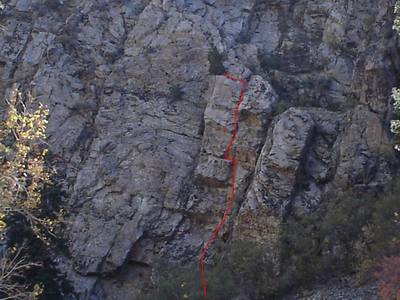 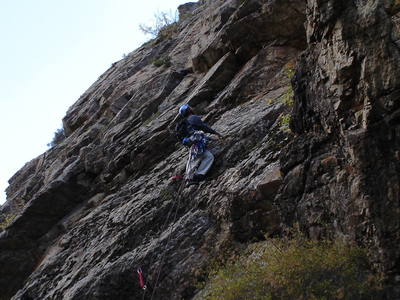 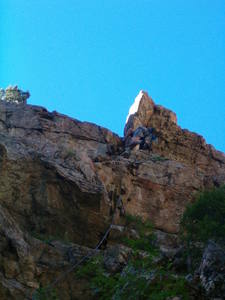 One more roof to go. 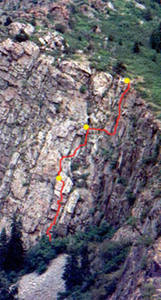 The top-out option to Spastic Funk 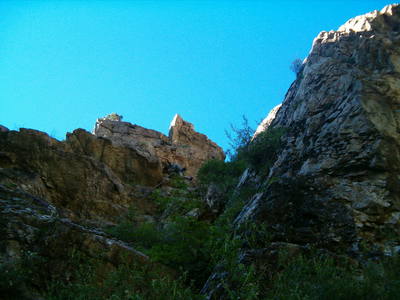 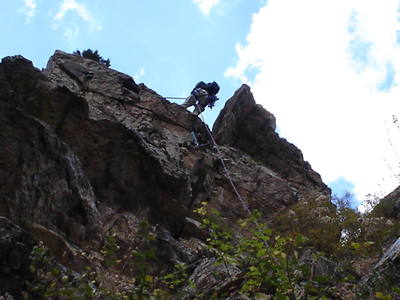 Rap Cleaning on the way down after the FA. Hey…