Located about 100 yards west of the classic "Outside Corner" on JHCOB Wall are three bolt lines tucked onto the choss and moss-infested face between the shale fields on the west side of JHCOB Wall and the well-established routes on the east flank. This route is the western-most bolt line of the three and starts in a dirty slot directly below the series of large roofs west of the face these bolt lines ascend. Belay is from a dirty, steep slope with a meager platform built, apparently, by the first ascensionists.

Work up this dirty slot to the first bolt, set among a field of moss. Work up through some steep terrain clipping the plentiful bolts, and avoid moving to the left line of bolts at the small roof. From the roof on, the route improves considerably. Consistently entertaining climbing moves up to the slightly overhanging crux. This section can be excruciating in the sun. I sweat right off of the holds and took a whipper. After another couple of attempts at holding onto wet lichen, I bailed left onto bigger holds (WAY off route) and slinked up to the chains. Fortunately Nathan showed me how it was done as he seconded the climb, easily reaching the large hold above the last bolt (*$%!!). It appears that you need to grab this hold before you can clip the bolt, as there is nothing solid below the bolt.

There is still a significant amount of loose rock, moss, and lichen on the route, so a helmet is a REALLY good idea. This climb will definitely improve with traffic, and could ultimately reach two stars.

This route is extremely well protected with about 20 bolts covering the roughly 180 feet of climbing. A chain belay station awaits at the top. You will definitely need two ropes for the rappel. 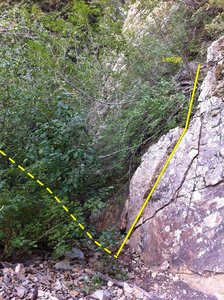 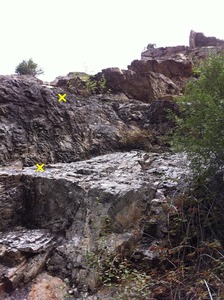 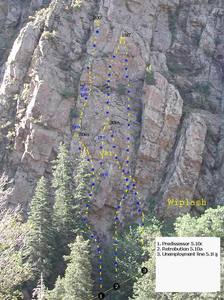 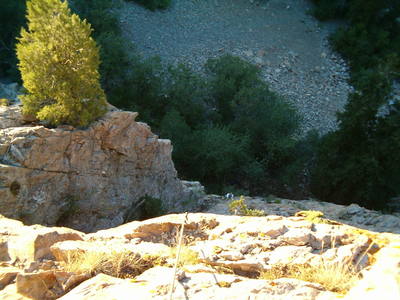 Vince behind the camera as I follow his lead.