Boy, am I glad I decided to try this out today. I haven't had this much fun on a single route all year! Surprising free from vegetation, as the name implies (unlike Ream's Chimney next door) with occasional choss. Easy slab and face climbing leads to roof after roof after roof (I think there were six, but honestly, I lost count). Granted, there is plenty of exposure throughout the route. There are ample rest opportunities, except when the roofs are so close together that there isn't much of a rest stance. The crux greets you after such a stance, with big pulls over a roof on crimpy slopers, a committing sequence that left my arms tingling. I couldn't resist a moment of celebration and a resounding yelp of delight once I reached the stance above. The Ruckman guide gives this route 5.11a, but I didn't think that the crux was harder than 5.10c/d. All of the other roof sequences were 5.9-5.10a and the slab/face climbing ranged from 5.7-5.10b. Maybe it deserves the 5.11a for a combination of length, multiple cruxes, technicality, and the amount of time it takes on lead (I took about an hour). Not to be missed, this route is one I'll be returning to often.

Start just to the right (West) of Straight Up and to the left (East) of Deep Dark Crack. This is the route that climbs through all of the roofs. Rappel off of the anchors with a 60 meter rope (or two ropes) to the top of the gully to the West. It is 100', so you may want to tie knots in the ends of your rope. A short hike (60') gets you back to the start.

6 bolts and small gear. First bolt is 30 feet off the deck, second is another 30 feet. The bolts around the finish are not as widely spaced, but there is a gap between bolts at the crux, so make sure to bring gear. I'm glad that I took a bunch of nuts, they were very handy. I didn't use anything larger than a black Metolius. Helmets are advisable for those who bump their heads on roofs. Two chains and a glue-in for anchors. 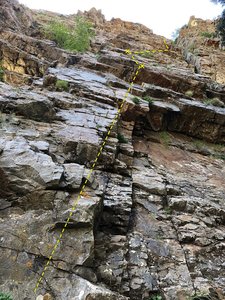 Start on the bottom left side of the wall and w… 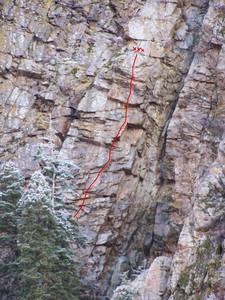 The red line is a pretty good guideline for whe…