Getting there: For those who have E. F-R's "Squeezing the Lemmon II," Toy Roof (route # 19) is in the fourth embayment above Monkey Business.

Go up- the southwest face of Greenslabs, past Monkey Business, past Yurt Monkey, and turn into the amphitheatre just up slope of David and Goliath. Toy Roof is just to the uphill (right) side of a large crack system (Amateur Night), and can be easily recognized by its "roof." This roof is two feet deep, 7 feet broad and about 7 feet off the ground.

If you are used to sport-routes, like those on Ridgeline, the three bolts on Toy Roof might seem to be spaced with rather intimidating distances between the clips. Done today as a sports line, I imagine the face would have no less than five bolts, possibly even a sixth. Nonetheless -- done up in the bolder, minimalistic fashion that better suited climbing ethics two decades ago -- these three bolts are at least sufficient. Both the crux zones are well-protected, so that the most likely places of fall-danger should result in nothing more than four to eight foot "air" tumbles. Keep in mind that leaders who fail to adequately protect the spaces between the bolts may face a long fall to jutting ridges.

The most severe fall scenario, I think, would be a tumble just before clipping the second bolt, where the possibility of impacting the bulge (at the first bolt) might result in considerable bodily harm...

5.8 leaders looking for a test, might want to top rope this route a few times before hazarding their persons on this lead.

In between the bolts, there are a few secure placement opportunities where the stances allow the climber to spend some time figuring out clever ways of dealing with the outwardly flaring, nearly horizontal cracks. I usually construct oppositional pieces tied together to form a "Y" shaped anchor. In this effort I find that Lowe Tri-cams -- ranging from 0.5 (pink) to 2.5 (blue) -- work well, while others trust themselves to a spread of "friends," camalots, or aliens.

While there are some "adequate or better" placements available, be advised that one frequently hears lead-climbers comment that half their placements on Toy Roof were little more than psychological; and while cleaning, the second-climbers often report that the pieces "fell out of the cracks on their own accord."

The climb is currently listed in Eric Fazzio's "Squeezing the Lemmon II," as a 5.9.

Maybe so... But, in the old days, 1986 - 87 when I did my first lead on this Bob Kerry/ John Hays route, I thought it was a definite 9+. Of course, back then, shoe rubber was not as positively gripping as it has since become and the delicate foot placements required to surmount both the crux zones (just above the first and third bolts respectively) are certainly made less daunting now that I am shod with stealth technology. Perhaps one way of better judging the difficulty of Toy Roof would be a comparison with the nearby Greenslabs route, Yurt Monkey. If you find Yurt-M feels like a 5.8+, then Toy Roof will (most likely) feel a full grade harder.

Don't bother reading this section if you want a traditional, "on-sight" experience, and skip to the final evaluation.

The intial roof can be easily protected on the right side, and bold climbers will then move left directly under the toy-roof formation to climb it directly if they wish to extract the maximum excitement from this feature. It can be surmounted in four or five distinct variations with anything from excellent to tentative handholds. Alternatively, many climbers elect to pass the roof just to the right, and make an easier step-back left onto its platform.

After clipping the first bolt, the real fun begins. Move up just left of the bolt, then cross over it to the right if you wish to do the classic line. Just a hint -- look high for a left hand edge, and look right for some crimping nubbs that will take the fingers of your right hand. Look down for a set of delicate foot placements (largely to the left of the bolt line) where you should find a series of ledges, bulges, and friction dishes. Then step out with the right foot above the bolt. Much easier climbing may be found by traversing left, although (presumably) the huge, inviting crack of "Amateur Night" is "kinda-sorta" off route for the purist.

At the third bolt, the problem becomes more a situation of balance than power, and sticky rubber soles are at a premium! The knobby xenolith just left of the bolt (white on a darker background), is a crucial grip for the left hand; while the right finds a delicate purchase in a short, vertical crack with small white teeth. Watch your foot placements here! Once you haul yourself two/ three feet above the take-off platform, a 5' 8" person can reach the grand ledge above -- then feel along it for the best finger-pocket grips. Next, a bit of a scramble should get you high enough to start thinking about a right-handed mantle move. For enhanced "fun" try this sequence without using the xenolith as either a handhold, and then later as a foothold -- it pumps the action up to about 5.10a.

This second crux zone, just like the first one, can be circumvented with a traversing move some four feet to the left.

I have rarely felt secure about the protection above the third bolt, my placement skills being, apparently, inadequate at this point in the climb. Usually I just climb straight through to the chains, but sometimes, being less bold, I will move up and right to a great horizontal gouge. This feature forms a six inch high, three feet long cavern. At the left edge of this gash I can occasionally work a large piece into the deep recesses, and (occasionally) it will seat satisfactorily...

Although it is a fairly short climb, and the protection can be tricky, Toy Roof is a very engaging lead that never fails to give me a high degree of satisfaction each time I climb it. In fact it has become a regular favorite of mine, so I'm probably biased in its favor when I give it three quality stars. My sincere thanks to Bob Kerry and John Hays for putting up this route. 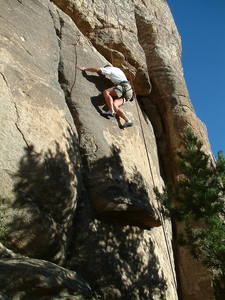 Climber at the crux moves. 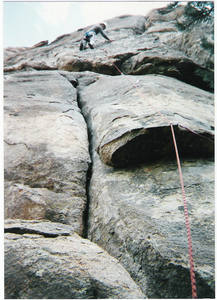