Winslow Wall is a wonderful little crag tucked away in an unlikely location. Those willing to do the drive and complicated approach & exit will be rewarded with a beautiful, secluded canyon filled with many sport & trad routes that scale the steep sandstone walls.

The prime season to climb at Winslow Wall is late Spring through mid-Fall. The water levels are generally too high during early to mid Spring, and late Fall can be too cold in the canyon. The hottest summer days can be nice if you chase the shade. Most routes are single pitch, but there are a few 2 pitch routes to be found. To my knowledge all single pitch routes can be climbed with a single 70 meter rope, and for many 60 is adequate. Although there are a few easier routes, enough for a day or so, most routes are solid 5.10 or higher.

To the best of my knowledge, early routes at Winslow Wall were of crack lines, most notably The Kingsnake, The Hanging Judge, Darkstar, and Stick It. First ascensionists include Tim & Larry Coats, John Steiger, Ray Ringle, Jim Haisley, Tim Toula, Stan Mish, and others. Later on several sport lines were developed on the faces between the cracks. First ascensionists include David Bloom, Rodney Blakemore, Doug Lafarge, Rich Ludwig, Chris Hahn, and others. There is still a tiny bit of FA potential in the main area. There is a ton of FA potential up-stream from the rap in gulley, but you will want a boat (a small inflatable works best) as the water gets deep. Please do not bolt near gear placements, squeeze between routes, or alter existing routes. 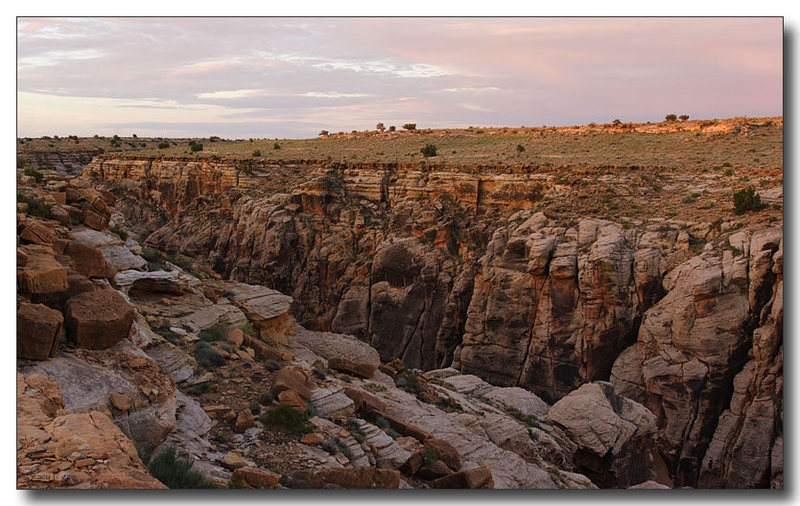 Morning at canyon rim, as viewed from the camping area.
There is a small amount of primitive camping at the parking area. If the camping is full one can drive a short bit back the way they came in to find some other camping spots. However, if camping up the road please make sure you are not doing so on private property. The area is barren, so expect exposure to wind/sun/etc... There are no toilets, water spigots, trash cans, or designated campsites. Pack out ALL trash. Use existing fire rings instead of making more. Take proper pooping precautions. Don't trample or otherwise damage vegetation. You know the routine. 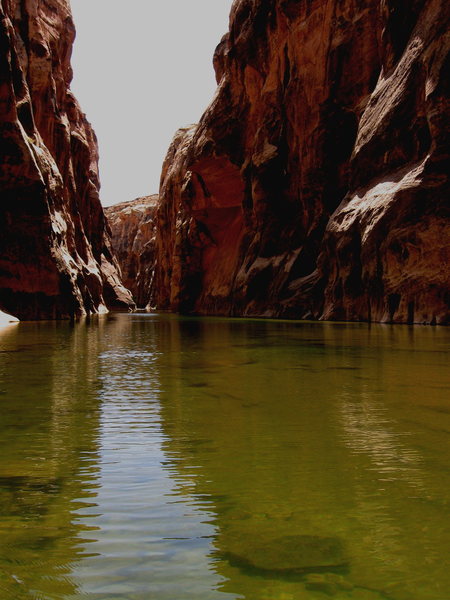 Winslow Walling...
Winslow Wall is an isolated, delicate, environmentally sensitive, & incredibly beautiful area. Please keep it that way. Please pack out EVERYTHING you bring in. Please poop only above the rim.

A few considerations:
-Watch out for occasional patches of poison ivy in the canyon.
-Please avoid excessive chalk & clean off any tick-marks before you leave.
-The area is occasionally used by boaters floating up from Ft. McHood. Please be courteous & considerate of them.
-The darker rock is often harder than the lighter rock, but not always.
-A couple of the older routes on the West Wall have anchors atop the 1st pitch, but climbing the second pitch requires topping out, walking downstream on the rim to the end of the climbing area, scrambling down another gulley, then rappelling back into the canyon.

To get there: Start on highway 87. Turn east on highway 99 (1/2 mile south of Winslow) and drive for about 6 miles, passing over the Ft. McHood bridge (east Clear Creek) along the way. At the 6 mile mark there is a left hand turn, which is the signed Territorial Road. Just after this is a fence on the right. Immediately after the fence is a dirt road to the right. Turn right on this dirt road and follow it for about ¾ mile as it parallels the aforementioned fence. Some of this road is on private property, and continued access is appreciated, so please be very respectful of the area. After almost mile the road comes to a Y. Bear left at the Y (leaving the fence) and follow this road for about ¾ mile until it ends. Park here.

At this point you will be able to see the canyon below. Follow an obvious trail that parallels the canyon rim for a short while (maybe 1/3 mile) to a small slot leading into the canyon. Scramble down this for a short way to reach the fixed rappel & haul lines. Rap in & enjoy! Most of the routes are to the right (downstream) of the rappel, but there are a few great ones to the left also. To exit, most people either climb out the rappel gulley (5.4-ish) using a gri-gri on the fixed ropes, or just jug the fixed ropes. One can also climb out via a few routes that top out. 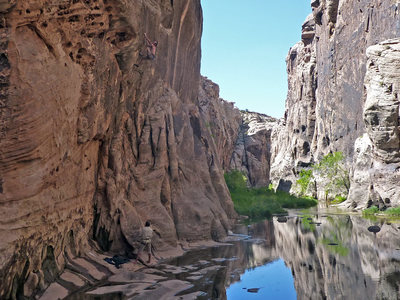 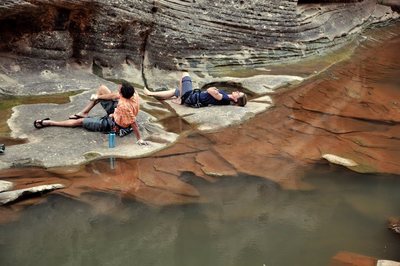 chillin' at the Winslow Wall 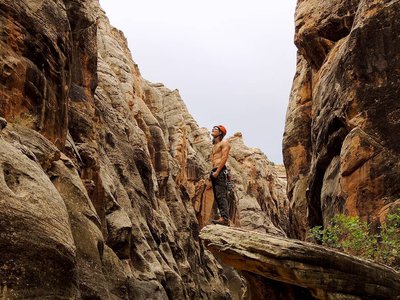 Scoping Routes In The Canyon 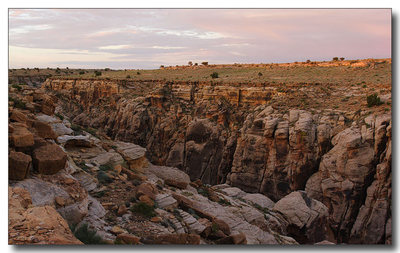 Morning at canyon rim, as viewed from the campi… 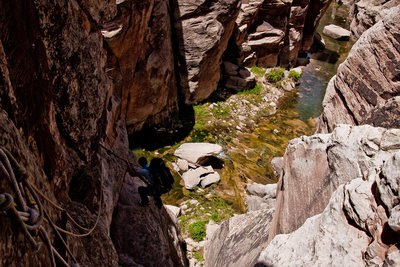 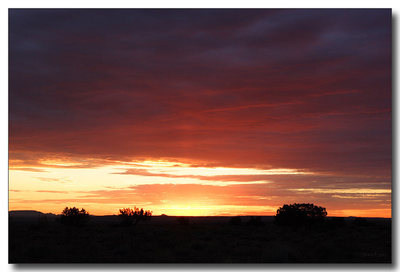 Summer monsoon sunset as viewed from the campin… 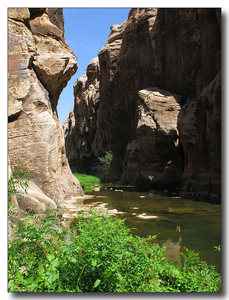 View down-creek from the beach near Has Bro. 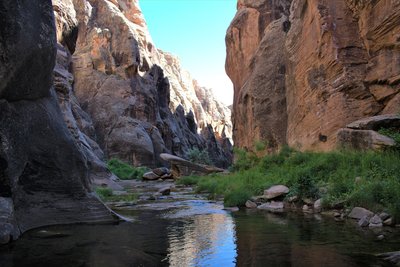 Looking upstream at the Winslow Wall, the rap l… 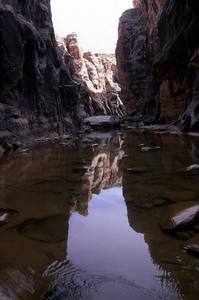 The idyllic setting of the Winslow Wall (East C… 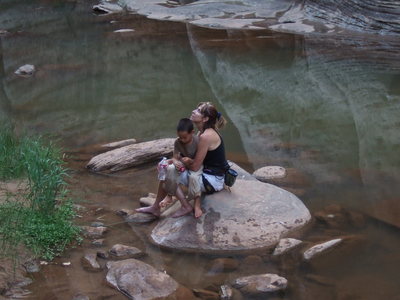 chillin at the winslow wall 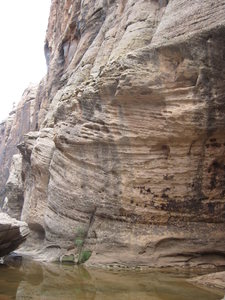 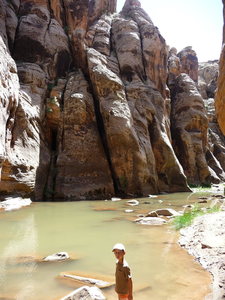 Lincoln at the Winslow wall enjoying the day.

All Photos Within Winslow Wall