Routes in The Brown Wall

As of Nov. 6, 2020: per Johanna Jones: COVID-19 update: Thunder Ridge is open, although there are two considerations: 1) The landowners have asked climbers not to use their private road to enter Thunder Ridge. 2) As of July 1, 2020, all persons 18 and older must possess a valid Colorado HUNTING or FISHING LICENSE to access Colorado Parks and Wildlife land. THIS IS WHERE YOU PARK ON THIS LAND.

#2 is a little tricky considering the shoulder and the crag is on United State Forest Service land (Free), while the PARKING is on CPW land.

Info can be found here: pikespeakclimbersalliance.o…

As of April 5th, the Pikes Peak Climber's Alliance announced that Thunder Ridge is CURRENTLY CLOSED due to COVID-19. Please respect this closure, and check in with PPCA on updates as COVID-19 stay at home orders and impacts reduce over the coming months.

Please do your best to maintain good relationships with the people who own the land in this area. Do not drive your vehicle past the "private property" sign. Do not go up to the house to ask for directions to the crag. Do not ride your bike down the road. Please move immediately to the side of the road if any landowners are approaching in their vehicles.

The Spark is a face climbing testpiece on a beautiful swath of Thunder Ridge granite. The route has a much more distinct crux section than its neighbor (Game of Drones), knocking its quality rating by a star, but the climbing is still brilliant!

This was Thunder's hardest route when first climbed, a title it held for a few weeks. It was my foray into route development at Thunder and sparked an infatuation that I hope grows into an enduring love affair.

Start behind the tree, scrambling up some ledges and possibly place a cam, then fire up the faint, left-facing dihedral. Get a good shake at a ledge at the 3rd bolt, reach up and clip the fourth, then fire into the crux sequence involving some long reaches on rounded edges - be ready for some super powerful crimping!

Persist through a couple more bolts, then the angle eases on the well-featured slab which you'll follow (placing gear) the shared anchor on the top of the wall.

This was an epic to bolt on the FA as I dealt with a jammed bolt and failing battery that left me running it out great distances. I returned and added bolts later after making the FFA.

Located on the Brown Wall directly behind the large scorched ponderosa, this is listed in the Haas guide as "11. Unbolted Project". The route joins the Schmausser Traverse on the featured slab and shares its anchor.

About 7-8 bolts, then a few pieces of gear to protect the 5.6 slab to the anchor. 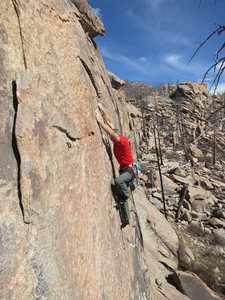 Mike Anderson nears the end of the crux section… 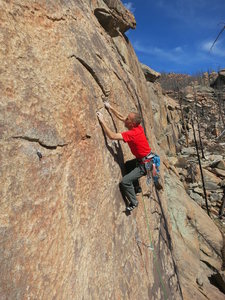 A nice view of Thunder Ridge from near the top… 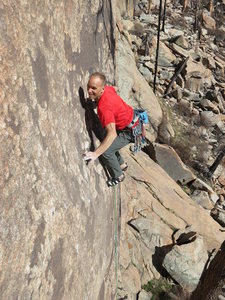 ...and be ready for some slabbin'. 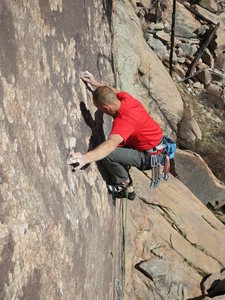 You'll need to mind your footwork to have any h… 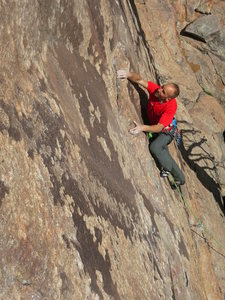 The cruiser climbing and rest before the crux o… 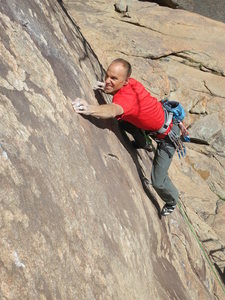 Mike Anderson crimping like mad on the crux of… 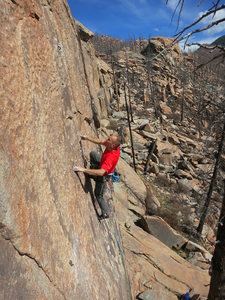 Mike Anderson nearing the end of the crux on Th…

More About The Spark