Suffer Machine is an excellent Stanley Headwall route! The mixed climbing is on high quality rock and is followed up by steep, sustained ice.

The crux is the roof on the first pitch. Start at the base of a blocky column of rock below to the right of the hanging dagger. Climb about 15m to a stance below the roof, where you can clip two bolts, and get a decent rest. Step out and get good tool placements above the roof and clip the first bolt. It's strenuous, because your feet are way under the roof at this point. Getting past the overhang is the hardest sequence of moves, but it eases a lot once you've pulled the roof. There are two bolts with hangers missing that were used to aid the roof, (have wired stoppers ready if you want) but they are difficult clips, and not much benefit.

Traverse straight left past 3 or 4 bolts to a trough that leads up and slightly right, to the base of a steep slab of rock. (A bolt at the base of the trough may be snow/ice covered)

Climb the slab up and left past 5 bolts using torques, slots, and edges (really fun climbing) until you can work your way around the corner and up to the bolted belay station. Going around the corner will be easier if the rock is iced up.

Climb a long pitch of sustained ice up and left to the higher of two comfortable belay platforms. Follow this up with another pitch of long, sustained ice. A final short pitch of easy ice leads to the top of the route.

The route is up the valley before you get to Nemesis. It will be easy to identify as it will have the broken off dagger. Be aware of avy hazard on the approach slope as well as from above.

Draws: At least a dozen, along with at least half a dozen long runners to reduce rope drag. 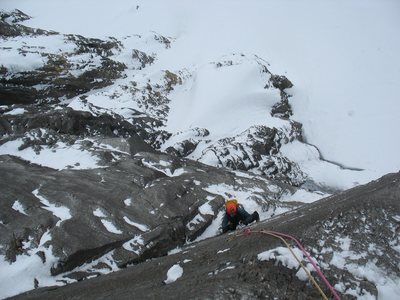 Starting up the slab. 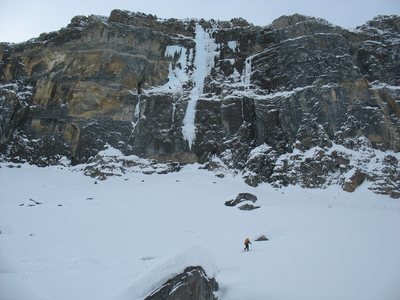 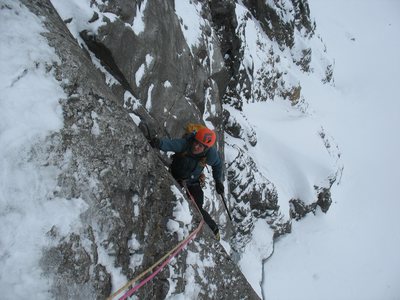 Finishing up the first pitch. 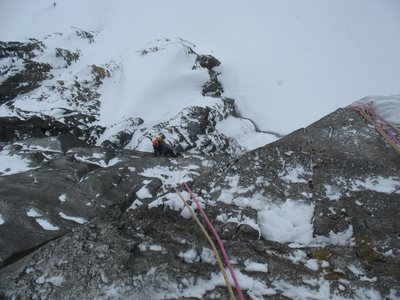 On the traverse after the crux. 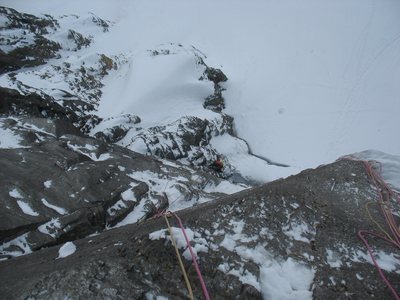 Paul Gardner climbing the rock pillar at the st… 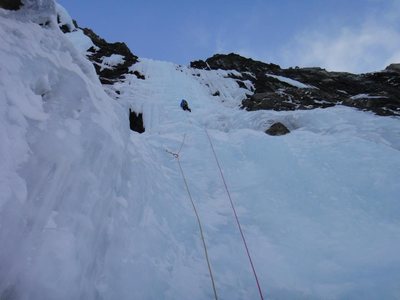 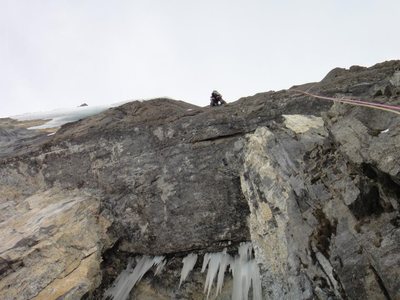 Traversing after pulling the roof on Pitch 1.