This route is the real deal when it comes to difficult mixed on the Headwall, it never lets up. Hard dry tooling on gear, and ice that ranges from veneer, to eggshell, to stacked fins, to good water ice.
P1) climbs through the rock band leading up to the big snow ledge. Significant avi hazard on the approach slope to this pitch!
P2) 30 m, M7- Starts 10 m around the corner to the left of Nightmare on Wolf Street. This is the starting point for most parties who climb the route. Climb a shallow, broken corner (sometimes some ice) to a ledge belay with two fixed pins.
P3) 20 m, M7. Climb a steep, shallow dihedral, to the next two-pin belay.
P4) 35 m M7, PG 13. Continue up the dihedral, tricky climbing with poor feet on adequate but tedious gear placements. There is a fixed angle at the top of the corner. Carefully continue up and right on poor pro across lower angle rock that can be either bare, snow covered, ice covered, or all of the above, eventually reaching the bolted station of Nightmare.
P5) 50 m, M6, WI4-5. Traverse 10 m right to a chimney, that hopefully will have ice on the left wall. Climb the chimney and continue up and right to a belay below steep ice.
P6) 50 m, WI6 Climb difficult, sustained ice to a belay below the final ice wall.
P7) 35 m, WI 5+ 20 m to the top, then traverse 15 m to the left and build an anchor.
Descent:
1) From this anchor, rappel 50 m to a 2 - bolt Extreme Comfort rap anchor.
2) 50 m rappel to Nightmare bolted station on the ledge.
3) 65 m rappel to the big snow ledge, and Nightmare anchor.
4) 50 m to base of P1, only if you approached from below the big snow ledge.

Monsieur Hulot start just left of Nightmare on Wolf Street. Most parties start at P2, after traversing the avalanche prone snow ledge. A series of bolts can be found along the traverse every 30 - 40 m, but will be pretty high up if snow level is low. 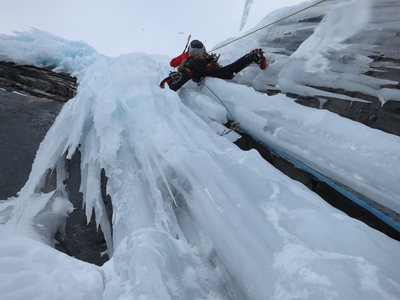 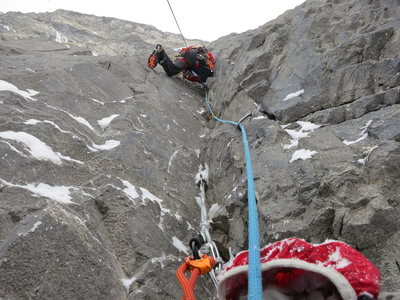 P4 is the crux, starts hard and gets harder. Pr… 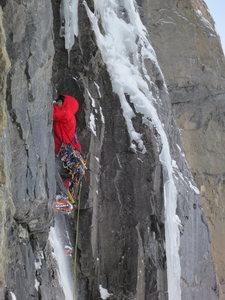 P5 traverses right, and then up the chimney. Ph… 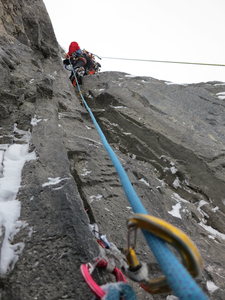 P3 is more secure at the start, going for a fix… 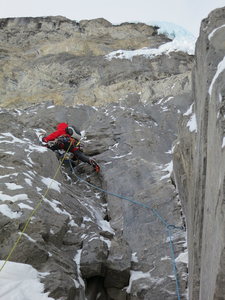 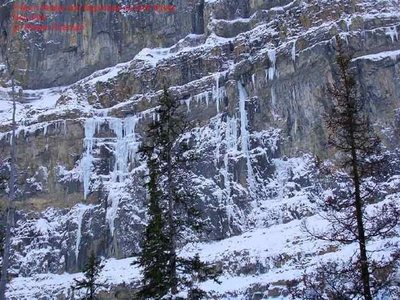 Monsieur Hulot is on the far left of this photo…

More About The Day After les Vacances de Monsieur Hulot